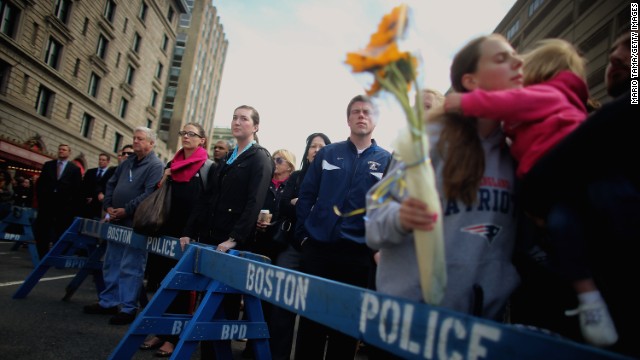 A week after the Boston Marathon bombings some answers to the “why?” of this act of terrorism are emerging as one of the perpetrators is questioned. But no amount of information about this horrendous crime can guarantee that such things will never happen again. We have to draw what lessons we can from it and prepare ourselves for the next unexpected attack.

MercatorNet asked some experts what kind of lessons these would be. A security specialist points out that sports events can be made safer but this requires a co-operative effort from every level of society. Commenting on hasty and false news reports, a media professor suggests the need for caution in integrating social media and news making. An expert on disaster-preparedness doubts there was any panic; she says regular people can usually be counted on to do the right things. In light of the 8-year-old child killed in Boston a paediatrician offers tips on how to answer kids’ questions about danger and death, and a social work professor talks about disaster planning at home. A disaster expert finds a silver lining, and a Cardinal preaches forgiveness.

Combating terrorism is a multifaceted endeavour, with a role for the public

“Sadly, we should not be surprised by political violence at sporting events,” says Professor Alexander. There is already a trail of them stretching back to the Munich Olympic Games in 1972. Besides, “The nature of a marathon, with an expansive area and the large number of participants (runners, volunteers, spectators), makes protecting every inch impossible.”

There are things that can be improved in the interests of greater safety but this requires co-operation from every level of society, Alexander suggests: “Combating terrorism is a multifaceted endeavour, which includes political will, legal instruments, intelligence gathering, law enforcement, military, private sector, non-profits, non-governmental organizations, and the public.”

The public can play a crucial role in intelligence gathering, he says: “There have been many terrorist plots that have been stymied due to tips by the public, such the Ft. Dix, New Jersey, plot, where employees at a retail store approached law enforcement when a cabal asked to convert a VHS tape of the operatives training with weapons and taking about violent jihad to a DVD. A chemical company and a freight forwarder contacted FBI about concerns their interactions with Khalid Aldwasari, a Saudi student who was convicted of attempting to use weapons of mass destruction in Texas. The public should keep in mind suspicious activity, including anything that appears incongruous with standard practices.”

In spite of the shock of last week’s attack, Alexander does not think that Americans will be put off their spectators sports. “Once professional sporting events resumed in Boston, the fan turnout was significant. Generally, there is a recognition that such attacks are very infrequent and that populations cannot cower in the face of violence, political or otherwise.”

The Boston bombing sent social media into overdrive — and into network news bulletins. But the more obsessively people followed Twitter the worse informed they, and the news outlets that used them, seemed to be. In the wake of Boston, is breaking news broken?

Professor Monahan thinks there’s at least potential for that, as the pressure of the 24/7 news cycle is greatly intensified in a live event.

“One thing that struck me in this regard was how much of the news work that usually occurs on the ‘back stage’ was occurring on the ‘front stage’,” he points out. The most notorious example was “CNN’s midweek coverage in which the reporter repeatedly mentioned on-air that an arrest had been made and network colleagues and executives trumpeted it as an ‘exclusive’ for the network. Of course, we now know that this information was very wrong and it would be two more days until the arrests. How did this happen?”

The messiness of what happens “backstage” in news production was played out in front of network audiences, says Monahan. “In this event (and in many breaking events in a 24/7 news cycle) the hidden and flawed processes of news work were exposed to the detriment of the news workers, audiences, and the overall value of the coverage.”

More specifically, he adds, the event “has further exposed the risks and rewards of social media in the news making process.” Although there is a strong temptation to use that information to fill a “news hole” created by an event that is riveting everyone’s attention, “it is almost inevitable that speculation and rumour and various ‘possibilities’—all hallmarks of public communication in crises events according to research on disasters and collective episodes—will work their way into the conversation more than we would prefer.”

Together with the failure to properly isolate front stage and back stage processes when communicating to audiences, “we can see the heightened potential for breaking news to be broken as you noted.”

The greatest fear of children is being left alone

One of three people killed by the bombing was 8-year-old Martin Richard. Other children witnessed the bombing scene. How do you answer a child who says, “Is this going to happen to me one day?” Dr Ken Haller advises parents not to give “sweeping guarantees” that it won’t, even to younger kids.

“At this stage, a parent can tell their child that such things are extremely rare – that’s why it’s news halfway around the world – and that the chances are exceedingly slim of something like this ever happening to you.

“The child might then reply, ‘But it could still happen’. So here you say, ‘You know, you’re right. When I see something so horrible as this, it really, really scares me. It scares me that some crazy person could do something like that, and I would never ever see you again. Now you tell me what you’re scared of.’

“This is when your kid will tell you whatever they need to tell you. Take it in. Reflect it back. Recognize that your child is growing up and starting to see that the world is not always safe. This is the beginning of wisdom.”

Asked what sort of background makes kids most resilient in such circumstances, Haller says it’s the experience of home as a “safe harbour” and a sense that they can bring any kind of concern to their parents without fear of ridicule or rejection.

“This, of course, works best in the context of clear rules and expectations of everyone’s role in the family. If kids know who they are expected to be and what they can expect from their parents, they will be best equipped to deal with the uncertainties of the larger world. The greatest fear that kids – and indeed all humans – have is that they will be left alone, abandoned to an insane, inhuman world.

“In fact as we learn more about the histories of those who commit such horrific crimes, this is a horrifyingly consistent trait. As children grow and mature, they will realize over time that not everything is perfect. Less so every day. But if they can be assured that there are people in their lives who are there lovingly with them on their journey, they will not live their lives in timid fear but in joyful curiosity and wonder.”

Disaster planning is necessary, even at home

Tanya Sharpe Assistant professor at the School of Social Work, University of Maryland

From her experience working with victims of violence, including children who witness violence or the traumatic death of relatives, or people in their communities, Dr Sharpe notes the importance of maintaining familiar routines such as attending school, recess, homework and family dinners to mental health. She adds that dialogue about “disaster planning and practice” has to the “new normal” — not only in schools and communities but in homes. There’s a challenge for parents.

“Do not become a victim of your own hatred”

The crowd which packed Boston’s Cathedral of the Holy Cross for Mass on Sunday demonstrates another “familiar routine”, and source of reassurance even to those to whom it is perhaps not so familiar. Offering the Mass for “all victims of violence here in Boston” Cardinal O’Malley preached forgiveness and told reporters he was against the death penalty, the Boston Globe reported.

“Forgiveness does not mean that we do not realize the heinousness of the crime,” he told reporters afterward. “But, in our hearts, when we are unable to forgive, we make ourselves a victim of our own hatred.”

In his homily the Cardinal paid tribute to the Boston police, firefighters, and others who responded to the victims in last Monday’s bombing. He also thanked those involved in the manhunt that followed to catch the suspected bombers. And he urged the congregation to take heart from the compassion and generosity displayed by so many people during a week otherwise full of horror and pain.

“We must overcome the culture of death by promoting a culture of life, a profound respect for each and every human being made in the image and likeness of God, and we must cultivate a desire to give our lives in the service of others.

“In the face of the present tragedy, we must ask ourselves what kind of a community do we want to be, what are the ideals that we want to pass on to the next generation. It cannot be violence, hatred and fear. The Jewish people speak of Tikkun Olam, “repairing the world.” God has entrusted us with precisely that task, to repair our broken world. We cannot do it as a collection of individuals; we can only do it together, as a community, as a family. Like every tragedy, Monday’s events are a challenge and an opportunity for us to work together with a renewed spirit of determination and solidarity and with the firm conviction that love is stronger than death.”

The norms of civil behaviour do not disappear in a disaster

As an expert on disaster preparedness, Dr Clarke would be among the first to notice anything different about the public response to the Marathon Monday bombings. But, he says, there were no surprises. “As soon as the explosions happened people ran to help others. Some people ran away, to be sure, but others ran toward what could have been a situation in which another explosion was imminent. Then reporters ascribed ‘panic’ to people running away–as if running away from danger were a foolish thing to do.”

The disaster movie script did not play out because, he says, “people do not lose their sense of connection to others just because their environments are suddenly in disarray. The norms and shared expectations of reasonably civil behaviour do not disappear in disaster.”

The idea that if you scratch a human being you find nature red in tooth and claw is not a view Dr Clarke shares.

“There is a common perception that our true human nature is selfish, and that in times of disaster this true human nature emerges. But this is wrong. There may be part of human nature that’s self-centred but there’s another part that’s other-regarding. This does not mean we live in some sort of paradise. It does mean that in disaster regular people can usually be counted on to do the right things. It’s more often the case that we see the elite panic than public panic.”

From Clarke’s observations there’s even a silver lining to catastrophes. “As awful as the deaths and injuries are, we see that it is very difficult to kill a great many people.” There’s a lesson, too, about the lack of capacity in public hospitals in the event of mass casualties (from a flu pandemic, for example) — though we “probably won’t” learn it.