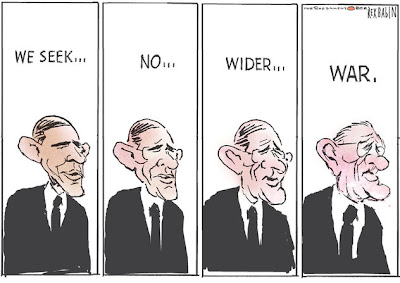 When Barack Obama was elected United States
president in November 2008, he was instantly compared with Franklin D
Roosevelt: a leader who would use the deep financial and economic
crisis he had inherited to transform American politics. The moment
seemed propitious to fuse his inspiring human qualities with the clever political calculation expressed by his chief-of-staff Rahm Emanuel: “Rule one: Never allow a crisis to go to waste. They are opportunities to do big things.”

Even at the time, it seemed to me that a more relevant comparison was with Lyndon Baines Johnson.
LBJ had assumed the presidency at a time of perceived national crisis
after the assassination of John F Kennedy in November 1963. After
eleven months in the White House, the former vice-president was
re-elected by what is still the highest proportion of the popular vote in American history.

By
spring 1965, violent confrontations over desegregation in the south
coincided with Johnson’s first and fateful moves to escalate American
involvement in Vietnam. Johnson’s presidency was set on a course that
would eventually rob it of forward momentum. In March 1968, Johnson
announced that he would not be a candidate for the presidency in that year’s
election – an event that can be seen in retrospect as having opened the
door to Richard Nixon and (two instances of ineffectual Democratic
leadership excepted) forty years of Republican ascendancy.

In a concentrated period
of decisive leadership that lasted less than two years, Johnson passed
two important acts of healthcare reform, Medicare (for the elderly) and
Medicaid (for the poor); two historic civil-rights statutes (the Civil Rights Act of 1964 and the Voting Rights Act
of 1965); a groundbreaking series of environmental measures; and dozens
of education bills, which together secured a substantial role for the
federal government in elementary and secondary schools for the first
time in American history.

This record, in light
of Obama’s current predicament and my earlier view that he might
usefully be compared with LBJ, invites a closer look at the two presidencies and their contexts.

Barack Obama’s
extraordinary campaign offered the prospect of an ambitious portfolio
of legislative proposals were he to reach the White House. He has now
been in office for a little longer than half of that extraordinarily
creative period of statesmanship under Lyndon Johnson. So far, his
record in persuading Congress to accept them has been dismal. Now his
Democratic Party faces the serious danger of comprehensive losses in the congressional elections in November 2010.

There are many ways to register the gap between promise and reality. Here are just three.

First, Obama pledged
to restore the United States’s reputation in the international arena by
making it plain that the country opposed torture and supported fair
trials, due process and the rule of law. The signal of this commitment
was a promise to close the Guantánamo prison-camp within a year. But the camp remains open, the administration’s declared intention to try Khalid Sheikh Mohammed (the alleged architect of the 9/11 atrocities) according to US laws is uncertain, and concern with morale in the CIA seems to trump human rights.

Second,
Obama the campaigner voiced doubts over the war in Afghanistan. In
practice his new strategy there increases the US’s military involvement
and extends its range to Pakistan, albeit as part of a plan that
envisages eventual withdrawal. In other areas of foreign policy, the
president has been unable to effect a rapprochement with Iran and been treated with disdain by China at the Copenhagen climate-change summit.

The
picture is more mixed over two major domestic policy priorities, but
even here no outstanding success can be claimed. First, Obama did
succeed in pushing through Congress a vast stimulus package
that has restored the profitability of the financial-services sector,
but does not insist that it perform its social function by lending to
individuals and small businesses. Unemployment remains high
and corrosive. Second, his healthcare-reform plans have become a shadow
of his original proposals and even this is reliant for progress on a
parliamentary device (“reconciliation”). Washington is now waiting to
see whether that will work.

The conclusion is unavoidable. Barack Obama, for all his integrity and talent, genuine charm and rhetorical
brilliance, has – so far – failed as a president. Perhaps the most
clinching evidence for the claim is that this man who sincerely wanted
to bring Americans together, to “reach across the aisle” to Republican
opponents, and to find common ground in the centre, has overseen a
situation where America’s partisan political divisions are more acerbic
than ever.

Many would argue that this summary is
exaggerated, and that Obama may yet redeem some of his election
promises and achieve some of his proclaimed goals. I do not accept,
however, that it is unfair: the verdict could be, and often is, stated
in far more critical terms.

The point of a comparison
with Lyndon Johnson’s record is not to denigrate Barack Obama, still
less to airbrush Johnson’s warts. It is rather to hold up a lens to the
ways in which American public life has changed, and for the worse, in
the years of the conservative ascendancy.

It
can be said that Johnson was lucky – that he took advantage of a
“window of opportunity” afforded by a national yearning for
reconciliation after the Kennedy assassination. It is true too that
some (not all) of Johnson’s legislative achievements had been proposed
by Kennedy before his death. But it took Johnson’s own great political
qualities – his legislative skill, his understanding of Congress and
its individual members, as well as his sheer force of personality – to
pass an immense portfolio of legislation, especially the two great
civil-rights acts.

But
other important realities of American public life made Johnson’s
achievements possible. They include the assumptions of the period, and
the temper and tone of the country’s institutions – not least the news
media.

During the cold-war years, and especially
after the disgrace of Senator Joseph McCarthy in 1954, public life in
the United States was dominated by what I have called “the liberal
consensus”. This does not mean (as
conservative commentators occasionally try to suggest) that America was
subject to the will of a liberal elite indifferent to the feelings and
interests of “ordinary” Americans; it means that the public sphere, and
in particular the mood of Congress, was ruled by a vast if unspoken
compact in which the different political sides accepted elements of the
other’s doctrine.

Thus, most liberals (who could
equally be described as social democrats and progressives) shared the
conservative, anti-communist ideology of the era; this was as true of
the labour unions as it was of the Kennedy administration. At the same
time, most conservatives accepted, if often grudgingly, the underlying
principles of Roosevelt’s
new deal; this could be said of the majority of elected Republicans,
and the dominant figures and thinkers in corporate business-management
and the law.

The Kennedy-Johnson years saw many
“outliers” to both left and right: union leaders, black leaders,
intellectuals on the left, and old Taftite or new Goldwaterite
conservatives. But it is possible to speak, without doing violence to
the truth, of a liberal consensus in American public philosophy in the
period. In broad terms, Americans accepted social-democratic government
and a mixed economy at home and the containment of communism as the
chief principle of foreign policy.

Since 1968,
everything has changed – in such a way that the world in which Lyndon
Johnson could dominate the political scene has disappeared into the
“urns and sepulchres of mortality”.

Before 1965,
each of the two parties that dominated American politics was a
coalition of ideologically and demographically distinct elements. The
division between them was rooted
in the events of the 1860s: civil war, the emancipation of the slaves,
the reconstruction of the south and its ending. The legacy of these
events was that the core cleavage in American party politics was not a
straightforward left-right one.

But since Richard Nixon’s
years in power (1968-74), and even more since Ronald Reagan’s
(1980-89), the division between the parties has become as ideological –
and as much a conflict between “haves” and “have-nots” – as in
Europe. The pivot was the events of the 1960s: the civil-rights
struggles, the Vietnam war, the early women’s movement, and the
decade’s social libertinism.

A
less obvious but just as influential movement took place in the
intellectual assumptions of the time. In 1950, the eminent liberal
intellectual Lionel Trilling
could write that there were no conservative ideas as such in America:
“[The] conservative impulse and the reactionary impulse do not, with
some isolated and some ecclesiastical exceptions, express themselves in
ideas but only in action or in irritable mental gestures which seek to resemble ideas.” Even two decades later, Richard Nixon could say (in an echo of Milton Friedman’s “we are all Keynesians now”) that he was a Keynesian.

Friedman,
to be fair, went on to say that in another sense there were no
Keynesians left. The pioneering monetarist’s presidential address to
the American Economic Association
in 1967 helped propel the thought into reality: the subsequent decades
saw an inexorable retreat of Keynesian ideas in the academy, in
influential institutions such as the federal reserve and the Council of Economic Advisers, finally in Wall Street and corporate management.

The
large shift in the intellectual history of the United States in the
late 20th century continued as conservative ideas advanced in the law
schools and eventually the Supreme Court.
The court, once controlled by a liberal majority that accepted the
doctrine of social activism inherited from Oliver Wendell Holmes and
Louis D Brandeis, came to acquire a more or less reliable five-to-four
permanent majority on the right. A single example can stand for many:
the Buckley vs Valeo judgment in 1974, which held that political ads were free speech and thus protected by the first amendment to the constitution. This ended attempts to reform the electoral-finance system.

Perhaps
even more important in America’s large-scale move to the right was the
changing profile of the news industry. The fashionable depiction of a
liberal media establishment had always been exaggerated; the majority
of journalists may long have been liberals, but most of their bosses
were always conservatives. If the news media had once sustained the
“liberal consensus”, however, there has been a steady change over the
last half century in the direction of more variety and then more
conservatism.

A few landmarks indicate the trend. William F Buckley’s founding of the National Review in 1955 broke the monopoly of liberalism in the intellectual magazines. Robert Bartley’s promotion to head of the editorial page of the Wall Street Journal
in 1972 (for which he had worked since 1964) allowed him to make it the
vehicle of undiluted conservative propaganda. Between the the mid-1980s
and mid-1990s, the three television networks found their
New-York-liberal tone gradually diluted – first by the appearance of
cable (albeit the pioneering Atlanta-based CNN was relatively liberal),
then by the foundation of Fox News, owned by Rupert Murdoch and controlled by Richard Nixon’s spin-doctor Roger Ailes.

The
result of this overall social and intellectual progression (or
regression) has been a profound change in the United States’s
ideological weather. The difference helps to explain why Lyndon Johnson
could preside over a monsoon of liberal legislation that completed and
in some ways transcended the achievements of his hero Franklin
Roosevelt, whereas Barack Obama’s more modest reform efforts have
become mired in frustration amid bitter polarisation and populist
resurgence.

President
Obama reached office on the promise of changing America. But the
country had already changed. It is time to shift attention from the
individual personality and specific failures of the president to what
has happened to the United States’s public philosophy and its
political-media climate.

Godfrey Hodgson was director of the Reuters’ Foundation Programme at Oxford University, and before that the Observer‘s correspondent in the United States and foreign editor of the Independent. His most recent book is The Myth of American Exceptionalism (Yale University Press, 2009). This article has been republished from openDemocracy.net under a Creative Commons licence.

none More by Godfrey Hodgson