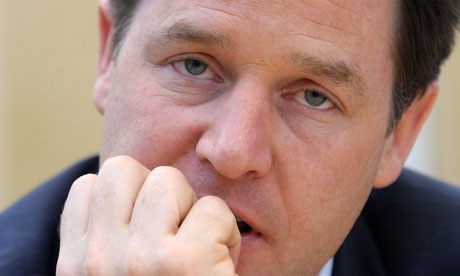 What is caught on camera when politicians think the cameras are no longer running, or caught on microphones in similar circumstances – or what appears in the drafts of a politician’s speech before his political judgement gives him time to sanitise it for public consumption – is always far more revealing than the air-brushed utterances we are generally fed with.

So it is with Nick Clegg who would like us to think he does not consider a very sizable proportion of his electorate to be “bigots”. Isabel Hardman took up the story in yesterday’s Spectator:

Nick Clegg is currently eating a Ben & Jerry’s ice cream called ‘Appley Ever After’ with gay marriage campaigners celebrating the government’s consultation on introducing civil marriage for same-sex couples. Things didn’t go all that ‘appley for the Deputy Prime Minister earlier today, though, when the Cabinet Office sent out what he later claimed was a draft of his speech that he was never going to give, which said:

‘Continued trouble in the economy gives the bigots a stick to beat us with, as they demand we “postpone” the equalities agenda in order to deal with “the things people really care about”. As if pursuing greater equality and fixing the economy simply cannot happen at once.’

An hour and a half later, a recall notice popped into journalists’ inboxes – which was clearly enough time for them to read the press release at a leisurely pace and then share the word ‘bigot’ with their twitter followers. It was followed a few minutes later with this corrected speech:

‘Continued trouble in the economy leads some people to demand we “postpone” the equalities agenda in order to deal with “the things people really care about”. As if pursuing greater equality and fixing the economy simply cannot happen at once.’

A spokesman for Clegg claimed that ‘this was not something the Deputy Prime Minister has said. It is not something he was ever going to say, because it is not something that he believes.’ Clegg himself told the reception that he was ‘a little bit surprised to see cameras assembled outside the gates, for the slightly obscure surprising reason that they expect me to use a word about opponents of gay marriage that I had no intention of using, would never use’. Which is intriguing, because it was clearly something someone who drafted the speech believed it at some stage today.

Though ‘bigot’ attracted fury from Tory MPs on both sides of the debate, I understand the speech was not redrafted at the request of the Prime Minister. Number 10 didn’t actually need to get involved before the new version of the speech was sent out. Downing Street sources are reminding us, though, that the Prime Minister remains committed to passing gay marriage before 2015 using a free vote in the Commons. The problem is that some MPs in David Cameron’s party suspect that he feels the same way about their plan to vote against the legislation. I suspect some of them may wish to press him on what he thinks of opponents of gay marriage at Prime Minister’s Questions tomorrow.

We should be very grateful for these mistakes because it is so important for us to know exactly what politicians think and how different it can be from what they say.