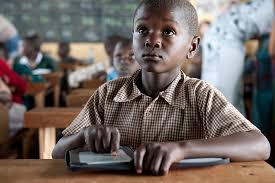 A project that began in Ghana, Africa, is an interesting example of the use of e-readers to improve literacy rates in schools where traditional print books are a luxury. Transporting print books has always been a challenge in Africa, with its difficult roads and expensive freight costs. Although promising, the use of technology in these contexts is still a work in progress, as it is in developed nations.

In 2010, former Amazon executives David Risher and Colin McElwee formed Worldreader, a not-for-profit group that aims to eradicate illiteracy in developing nations specifically through the use of e-reader technology. It gets Kindle e-readers by donation or buys them from Amazon at wholesale prices, with protective cases, training and support materials. E-books also come from the public domain (eg. corporate sponsors and government agencies), or by digitally publishing work by local authors. These sponsors are referred to as “the village” – a network of donors, publishers and “implementing partners” who will, it is proposed, eradicate illiteracy in developing nations.

David Risher describes his first day sharing e-books with students in an African school in his blog:

I spent the day with 20 students from age six to twenty-six, teaching them about e-readers and then letting them loose on a bunch of pre-loaded Kindles. In a way, we simply wanted to see how these children were going to react to this very new technology. We came away more convinced than ever that e-readers will change the face of reading in developing nations.

Interestingly, an early report by an independent reporter on the Worldreader blog reveals the family to be an important criteria in motivation to read and primary school success in reading. Access to print materials in the home plays a huge role. Also identified as important were book lending programs, classroom libraries, school libraries, and public libraries.

The message is that family is important in developing early reading patterns which go on to last a lifetime. The catch-22 for Africa is that most parents are illiterate – in some villages up to 90% cannot read. Will the Worldreader experiment be successful in pulling in the adults too or at least in starting up a culture of reading?

Putting e-readers into African schools has not been without problems. An independent evaluation funded by USAID identified several problems. In primary classrooms in particular, teachers said that making sure all of their young students were on the right page in an e-book could be time consuming. At all grade levels a very common complaint was that students spent too much time using the e-readers for entertainment purposes such as listening to music. One teacher mentioned that during class, some students played e-reader games rather than focusing on the lecture. Another teacher noted that students lost focus because of the overwhelming amount of information on the e-reader. Also of note was an over-dependence on the e-reader. For example, one teacher stated that students thought that everything on the e-reader was the “absolute truth”.

Worldreader is increasingly enabling local content from local African publishers to make its way into the hands of African school-children. The Worldreader experiment shows how technology can deliver information in a timely and relevant way to a local neighbourhood, but it remains to be seen if a genuine lifelong interest in books and reading will continue.

A former children’s librarian, Jane Fagan is currently a full-time mother of two.