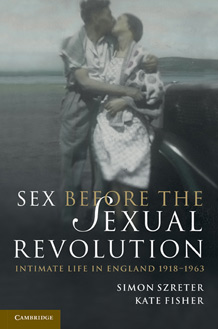 In the 1980’s, my hopelessly outdated mom counselled me not to kiss a boy on the first date. I tell my daughters not to kiss (or, for that matter, date) anyone they wouldn’t be prepared to marry. As someone who espouses values possibly more old-fashioned than those held by my pre-sexual-revolution era parents, I found this Mail Online item worthy of note.

Bel Mooney’s review discusses the recently published Sex Before the Sexual Revolution: Intimate life in England 1918-1963 — the work of University of Exeter historian Dr Kate Fisher and Professor Simon Szreter from the University of Cambridge.

The review begins by noting the unhappy, sometimes tragic consequences of “pre-revolution” sexual ignorance: everything from women being clueless and frightened on their wedding nights, to the tragic case of a teenage girl who was so terrified by her first menstrual period, and afraid to speak to anyone about it, that she committed suicide. We can be thankful, says Ms Mooney, that we live in a more enlightened age, but she quickly adds that there’s also a downside to our current liberal social attitudes. No kidding.

Unsurprisingly, the interviewees believe that the benefits of freedom and pleasure people enjoy today are outweighed by ‘a high divorce rate, marital infidelity, illegitimacy, sexually transmitted diseases, the pubic visibility of pornography, unrealistic expectations of sexual pleasure and the supposed lack of respect between men and women’.

She’s also willing to admit that we can continue to learn from previous generations, and while in some respects we may know ‘more’ today, we certainly don’t know it all.

This book made me reflect just how much the young patronise the older generation. I suggest that perhaps that generation were far more sensible about passion and partnerships than we give them credit for. They might not have had sex education, but that didn’t stop them learning how to love.

What struck me most powerfully on reading the detailed interviews was how happy and contented men and women could make each other — without all the openness about sex which can put so much pressure on young people today.

One older gentleman (Colin, a plumber, born 1923) who was interviewed for the book put it quite simply:

“Anybody can have sex, there’s not a lot of people can have love. And sex wi’out love is nowt.”

One of our modern “relationship” problems is that, contrary to popular belief, love is not something you passively wait around hoping to fall into; it’s something you have to work for. While sex comes naturally, especially to our information-saturated and over-exposed youth, love does not.

As the saying went (in a marriage preparation course I took with my husband, a quarter-century ago), “Love is a decision, not a feeling.” It’s not an emotion; it’s a way of life. It involves nice feelings, certainly, but also commitment, sacrifice, and sometimes, hard work. Who is going to teach the current and coming generations how to do any of that?

Caveat: I cannot vouch for all the content and tone of the book. A brief description on the University of Exeter’s website says:

The research is based on vivid, compelling and frank testimonies from a
socially and geographically diverse range of individuals.  It explores a
spectrum of sexual experiences, from learning about sex and sexual
practice in courtship, to attitudes to the body, marital ideals and
birth control.

It could be quite a mixed bag.