A further article in the Swedish series by the Institute of Marriage and Family Canada. Read the entire series:

A book review of Scandinavian Unexceptionalism, also published in the Financial Post

Sweden, Finland, Norway, Denmark and Iceland constitute the Nordic countries. Despite some similarities, there is no coherent Nordic model for family policy.

One key difference is on financial support given directly to parents through a home care allowance (a literal translation from the term used in Finland).

Here, Finland and Sweden take opposite approaches. In Finland, a home care allowance is a feature of family policy, available to all who choose it and firmly supported by successive governments since 1985 until this day.

Finland has had financial support for parents since 1985. It is used by 56 percent of eligible children under three years of age (2011).(1)

* The Finnish home care allowance is 340 euros (approximately CAD $500) per month, per child age three and under after parental leave is over

* Additional children under three get an additional 100 euros (about CAD $150) per month. Children above three but under school age are given 65 euros (just under CAD $100) per month, per child, as long as at least one child under three is at home.(2)

All Nordic countries, with the exception of Sweden, offer some form of home care allowance to those who do not use tax-subsidized daycare after parental leave, up until the child’s second (as in Norway) or third birthday.

Finland offers a choice of subsidized child care through either daycare or the home care allowance which can be used for home care, granny care, neighbour care or other private forms of care. Sweden for the last 40 years has offered only daycare on the national level with the exception of a few months in 1994.

There is little political controversy in Finland about the home care allowance. This is in stark contrast to the Swedish view that public daycare is always best for child outcomes and gender equality.

After a brief attempt to institute one in 1994, a second attempt was made in 2008 when the government reintroduced a more limited form of a home care allowance at 3000 SEK, or about CAD $470 monthly, per child. Offering this was a choice and only about one third of municipalities did. This will be cancelled at the end of 2015 by the current social-democratic government.

Many polls show that 60 to 80 percent of the Swedish population want some form of financial support for home care.3

While proponents argue for funding fairness and choice, opponents argue that the home care allowance is detrimental to gender equality and, without any conclusive evidence, even to child development. 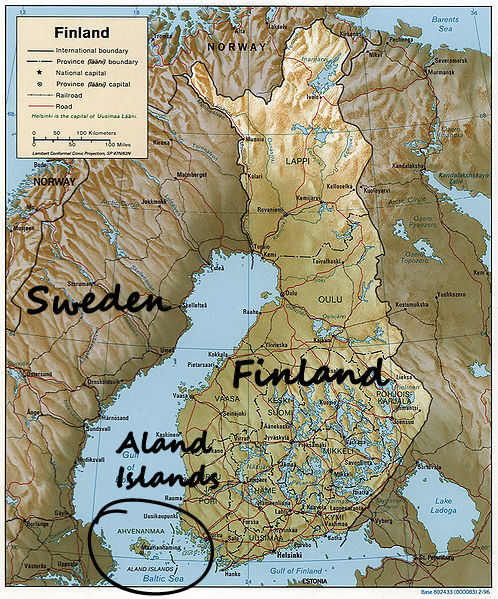 A Finnish example – The Aland Islands

Being part of Finland, not Sweden, the Swedish-speaking inhabitants of the Aland Islands have the Finnish home care allowance and lack the Swedish dedication to daycare as the only option for child care.

The Finnish social-democratic Minister of Social Affairs of the Aland Islands, Carina Aaltonen, was recently interviewed by a Swedish newspaper about raising the amounts of the home care allowance to 500 euros (about CAD $745) per child and month, and an extra 200 euros (about CAD $300) as a gender equality bonus if the mother and father shared the time being home with the children.

Aaltonen said, “with the home care allowance we want to support parents to believe in their own ability to know what is best for the own child.”5

Aaltonen diplomatically said that the social-democrats on the Aland Islands put a greater emphasis on parental rights and responsibilities than their political counterparts in Sweden.

Echoing the realities of developmental psychologists, Ms Aaltonen also says: [the first years] “…are an important time for children and parents to attach and it can also be a time in life to cool down, take it easy and not work full-time but to receive state support to be at home and take care of oneself and one’s child.”

She concludes by saying that raising the amounts of the home care allowance is costly, but a worthwhile investment: “Healthy families with children will create a healthy society.”

Among Swedish parliamentarians, even the most passionate proponents of the home care allowance could hardly conceive of such an open expression on the key role of parents in raising children.

As a side note, the top political position on the Aland Islands is held by a woman, Camilla Gunell. Finland also had a woman president, Tarja Halonen from 2000 to 2006, and two female prime ministers, both in the 2000s. Swedish women have yet to rival these accomplishments.

Percentage of children in daycare, 2013

With the home care allowance, Finnish parents were given a subsidized alternative to daycare – home care – and about half of them chose it. Nine out of ten Swedish parents chose daycare as no other subsidized options were offered.

There is no conclusive evidence that daycare is better for children’s development than parents choosing home care.

In ambitious welfare states, public spending on child care makes sense. What doesn’t is supporting only one form of child care. A child care monoculture with state-funded daycare as the only option can be harmful long-term.Paying daycare staff to raise children and not the parents who want to do so at home makes no sense and will negatively affect culture and society.

Neither is this approach in alignment with the human rights conventions explicitly stating in various ways that the choice of raising and educating children is the responsibility of the parents, not the state.(7)

What do children need? A note on developmental psychology

Developmental psychology tells us there is a great difference between starting daycare at age one or at age three. A three-year-old has more in common with an adult than with a one-year-old. Developmental psychologists have known for decades that children under three or four typically are not developmentally ready for bigger groups and social contact with peers.

Without inferring further causality–as there are so many factors influencing social outcomes–the developmental outcomes for Swedish children and youth are significantly worse in both psychological health and school outcomes than in Finland, as shown in an earlier article.

Finland, on the other hand, is consistently one of the top nations in education outcomes as measured by PISA. Mental health development in youth is better than in Sweden, too. There is also a stronger cultural support of parenthood in Finland.

Having lived in both countries, I would say that Finnish parents are generally more confident than Swedish parents.

Even if many factors are involved in these developments, the high exposure to early daycare in Sweden certainly cannot be ruled out as a substantial factor to the negative effects on child development and parenthood seen in Sweden.

Certainly, it is inarguable that the Finnish school results have flourished in spite of less daycare attendance.

Child care support will differ in different nations depending on the history and political culture. However, the basic needs of children are always the same. Children do best in a family environment of warmth, love and happiness. Only parents can judge how these needs are to be understood for the individual child. Therefore, the decision of child care must stay with the parents without the influence of political agendas, economic, ideological or otherwise.

The Nordic countries all have a political culture of high taxes and high subsidies. In this context, Finland is offering variety – daycare and the home care allowance. Sweden on the other hand has chosen a child care monoculture, providing only institutional daycare. Finland has all the signs of more successful child outcomes.

Of course, countries with other political cultures will choose different solutions. Keeping in mind that children’s needs are the same, governments need to keep their child care policies neutral and not try and influence care decisions, which only parents can make.

If tax-subsidised daycare is to be introduced there needs to be a corresponding financial support for home care, granny care and other private forms of care as for example the Finnish home care allowance

Canadians wishing to learn from the Nordic countries should examine Finland.

Jonas Himmelstrand is a business consultant and founder of his own institute, The Mireja Institute for welfare and development through family. He is also on the board of Haro, a Swedish NGO Empowering Parents and Promoting Gender Equality with the Child in Focus. He writes extensively about attachment, daycare and family. Himmelstrand lived with his wife and three children in Sweden until 2012, when they faced persecution for home schooling. They had to pay a fine of 11,000 Euros. Himmelstrand and his family now live on the Aland Islands, a self-governing, Swedish speaking province of Finland, where greater educational choice is allowed.

The above article is reproduced from IMFC with permission.