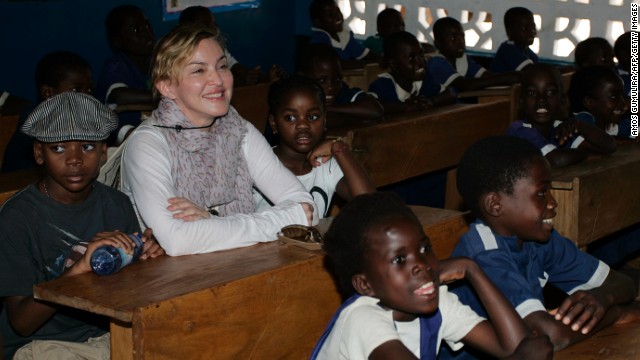 In the past weeks we have witnessed the verbal war between Malawi and Madonna – who has adopted two Malawian-born children. Three themes have dominated the media overload – the altercations between Madonna and Malawi; Celebrity Charity and Corruption. We intend to peer into these three layers.

Madonna had visited Malawi to inspect 10 classroom blocks her charity was building there. At the departure hall of the airport, Madonna realized that the VIP statues had been withdrawn from her and her entourage. But that’s only the beginning of the drama.

Not wanting to be outdone in the war of spit: the office of the Malawian president, Joyce Banda, accused Madonna of wanting Malawi “to be forever chained to the obligation of gratitude”. Part of the harshly-worded statement reads thus:

Madonna feels that the Malawi Government and its leadership should have abandoned everything and attended to her because she is a music star turned benefactor who is doing Malawi good… its leadership should have rolled out a red carpet and blast the 21-gun salute in her honour because she believes that as a musician, the whiff of whose repute flies across international boundaries, she automatically is candidate for VVIP treatment.

This set the stage for the grand bashing of Madonna and the entire company of celebrity messiahs in Africa. It was as though that this incident only ignited a latent contempt by some Africans.

Due to the over-simplified paradigm to development in the continent, it seems that granting aids has been the principal feature in the poverty math. As such, the guile that erupted with Malawi/Madonna spite should be linked to the voice of some African elites who are convinced that aids will not cure the continent.

Besides, some are convinced that this stereotype of aid-cures-all in Africa, has been ingrained by celebrities – who in most cases, know little about the continent – but are most often conferred with ‘expert’ status on Africa. And this is usually because these celebrities adopt a cause, visit at most one country and then donate. With that they assume the celebrity achieves the status of savior, who can pontificate about Africa.

In Africa: How to be an African Expert, Duncan Clarke prescribes the following:

If you think that Duncan’s satire was scratching then don’t read this Open Letter to Madonna by Binyavanga Wainaina: “As a civil society activist working on the African girl child I would love to talk with you about coming to Kenya where the girl child needs you very much. She is surrounded by wild animals! And corruption!” Binyavanga politely thanked Madonna for her help but asked her to take her pity elsewhere. And Andrew M. Mwenda retorts that the messiah mentality sees a condescending west coming to save Africa: “Some come to save orphans, others to defend human rights, feed the hungry, treat the sick, educate our children, protect the environment, end civil wars, negotiate aid and promote family planning, lest we overproduce ourselves.”

Another tendency that puts many off these celeb-charity saviours is that they make it look as though the continent cannot do without them. Also aids only fosters over-dependency – a situation in which most African countries/NGO’s just sit on their butts, doing nothing and expecting salvation from abroad. This must have inspired The Aids Prayer by Elnathan John:

And lead us not into self-reliance
But deliver us from ourselves
For thine is the aid-money, the power and the glory
Forever and ever, Amen

This nuanced understanding of the context is imperative to a deep appreciation of why many sided with the Malawian authorities against Madonna.

Nonetheless, this does not mean that the corruption allegations against the sister of the Malawian president, Mrs Oponyo, of financial mismanagement of school project funds, and of “harassing organisations that Raising Malawi has donated to” should be dismissed. Although the allegation has not been proven, it only beholds common sense that this corruption slur should be thoroughly investigated.