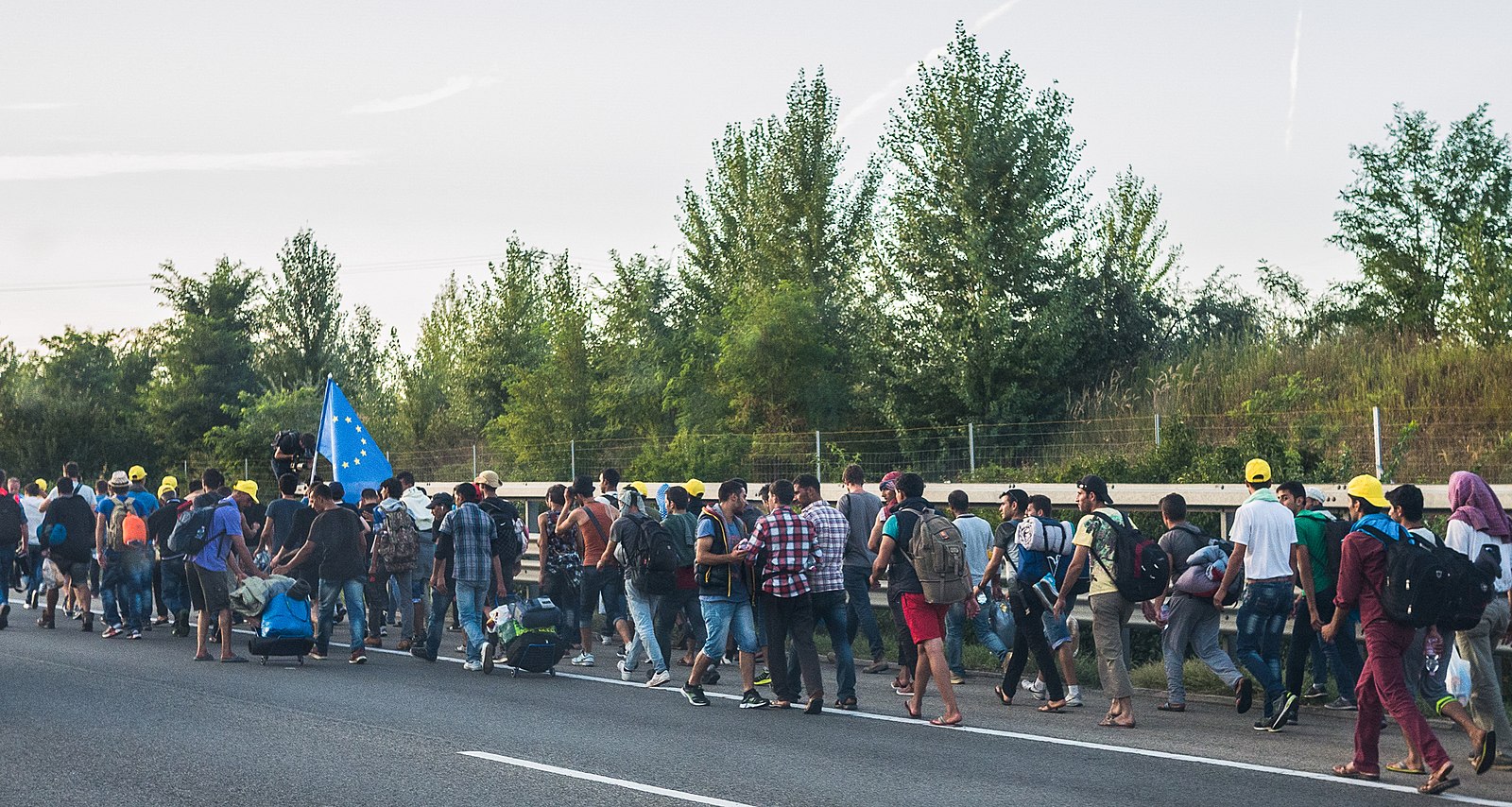 As someone whose parents were refugees and whose community was made up largely of people who had fled oppression and war, and being an immigrant, I feel my experiences give me a certain perspective on the current refugee crisis. I also studied as an “international student” in two countries, so understand the role of the outsider.

Clearly, the European Union is totally unprepared for a situation that can best be described as chaotic. People are fleeing war zones, mainly in Syria, Iraq and Afghanistan, but there are many who are fleeing poverty and hopelessness. Most following the so-called Western Balkans route are from the Middle East. Many of those who try to cross the western Mediterranean are from North and Sub-Saharan Africa, but not all. Yet very few of the vast reservoirs of African refugees are fleeing to Europe, although there are enough wars on the continent.

There are also people in sub-Saharan Africa who experience worse conditions, such as the millions of refugees in the Democratic Republic of Congo (DRC) who have fled the recurring waves of conflict in Africa’s Great Lakes region (Rwanda, Burundi and Uganda) as well as those in Ethiopia and Kenya, most of whom have fled fighting in Somalia, another African failed state. And there are Zimbabwean refugees all over Southern Africa, yet none of these people are moving in waves to Europe.

So why did this vast number of people suddenly decide to move in 2015?

The indirect cause is clearly war — in Libya, Syria, Iraq, Somalia, Nigeria — and in other areas conflicts. These places may have had oppressive governance, but they at least had governance. However, the refugees have been fleeing into camps in neighbouring countries. What made them suddenly leave the camps now?

As far as North and West Africa goes, there is a very well-developed pipeline that started as a drug route through the Sahara, where drugs from South America were funnelled to Europe. Intelligence sources in both the US and Africa indicate that these smuggling networks, largely under the auspices of Al Qaeda in the Islamic Maghreb (AQIM) have added weapons and people from North and West Africa to their illegal movement of goods.

These traffickers have found a ready “market” for their human trafficking in Europe since Libya became another African failed state. Which makes me wonder, is something similar happening in the Middle East? After all, the war in Syria did not begin now, it started four years ago. The war in Iraq goes back decades. The war in Afghanistan, like in Iraq, is an on-again, off-again conflict, which started back in 1979 with the Soviet invasion. The transition in Libya to a failed state began in 2011.

A clear cause is a drop in funding to UN aid agencies. This no doubt plays a part in people’s decisions to leave increasing hardships in refugee camps in Lebanon or Turkey. But this still does not explain the mass migration to Europe. News carried by the mainstream media is no help, as these concentrate on sensational and heart-rending stories, which, while true, do nothing to help answer these questions. So I have been following news from Austria, Serbia, Slovakia and Hungary to balance feeds from the BBC, CNN and Al Jazeera.

As a person with a refugee background I could not help being surprised, not to say shocked, at certain behaviours of the current refugees/migrants (unfortunates, anyway). For instance, it struck me that they throw food away. A member of the Catholic Maltese Charity described how a refugee/migrant threw away the food he gave because of the Maltese cross on his tee shirt. This was not an isolated event, but a daily one.

My refugee parents brought me up to believe that throwing food away was literally a sin, not just something slightly naughty, but a wicked act that the good Lord would most certainly punish. As a food service worker at SAGA (later Marriott) in the US, I saw unbelievable amounts of food wasted by rich American students. I was shocked at this. But no-one there claimed they were poor refugees.

So why do they do it? They also demonstrate, have sit-ins and break out of refugee camps and have confrontations with the police.

For a long time, I did nothing but scratch my head about all this. This isn’t something we did. My parents arrived in the UK sometime early in 1957, following the failed Hungarian Revolution of 1956. My father was in a refugee camp at Skegness on the cold and windy Lincolnshire coast. They were not allowed into the town until they had some rudimentary English and at first neither the food nor the accommodation was wonderful. I know many refugees spent up to two years in camps in Austria and Italy, but I have not heard of any demands, riots or similar actions among them. It’s hard to put into words how grateful my parents were, and how they hammered it into my head to be grateful and to co-operate with the society that had so kindly taken me in.

As I said, I have been puzzled about some recent refugee behaviour. But I think I finally worked it out. Perhaps a rather silly South African example will illustrate it.

One of the country’s notorious minibus taxi drivers was recently in court, arguing in mitigation of the sentence he had received for driving without a licence. The magistrate was explaining to him that he needed to take a test and have the proper licence, not one banged out on a printer in some crook’s backstreet licence dive. The illegal taxi driver was indignant, arguing that he had paid a lot of money for his fake licence, and no-one had told him he had to take a test!

That might make some of us smile, or sigh, but I think something similar is happening here.  After all, the people arriving on the Greek islands have paid someone. Many of these poor people have paid a lot of money. Having done so, they expect something. Fair enough. I mean, if I go to a hotel, I pay. And I expect a certain standard of service for my payment. And the more I’ve paid, the better I expect the food and service to be. But then I’m not a refugee. At least, not this time around.

A lot has been written about the different receptions given to the people in Western Europe versus the V-4 countries. (V-4, or Visegrád-Four stands for a co-operation group formed between Hungary, the then Czechoslovakia, now Czech Republic and Slovakia, and Poland.)  None of these countries are enthusiastic about taking in tens of thousands of mainly Muslim refugees from either the Middle East or the Indian sub-continent.

Western media would have us believe this is because they are all racists and have extremist (neo-Nazi) governments.  But they are not looking into the real reasons. It’s too easy to put a label on someone you disagree with. What might the real reasons be, then?

Wealth: The former Communist countries have not been able to achieve parity with even the relatively poorer Western nations, like Italy or Greece, not to mention Austria or Germany. One cause of tension is the large-denomination notes migrants have been paying with at local shops on the Balkans and in Hungary, where locals have no change for 500 Euro notes.

History: Most Western Europeans or Americans have simply no idea what Eastern, Balkan and Central Europe went through in the past 500 years at the hands of the Muslim Ottoman Empire. It is no exaggeration to state that every shocking thing ISIS has done in the last few years was also done, but in far greater measure, by the Ottomans. Whether one thinks of slavery; sexual slavery; beheadings; forced conversions (like that of the Bosnyaks) or ongoing wars of extreme brutality, it’s all there. One can hardly expect people who experienced these things to be enthusiastic about the influx of tens of thousands of people from the same cultural area. While Western children are brought up to feel shame at the Crusades, Eastern children are proud of them, notably those of Nicopolis, Varna and the great Crusader victory of Belgrade in 1456. This last is a national holiday in Hungary, for instance.

Ukraine: All the V-4 countries are concerned that if things get worse in Ukraine, there could be a huge wave of refugees from that country, and they would have to shoulder the responsibility of a great deal of those refugees and have been making plans about this for some time.

It is difficult to really get a fix on this wave of refugee/migrants. Clearly, many are real refugees. (Of the 200,000 who crossed into Hungary, as at 16 September, some 63,000 said they were Syrians.)  But very large numbers are coming from Pakistan and Bangladesh as well as other countries where there is no war. Deciding who is who will be up to the authorities in each country.

But one thing is clear. In the history of people fleeing persecution, war and famine, people asking to be let in to another country did not make demands or threats. They did not throw away food, blankets or refuse to obey the laws of the land because they wanted to go somewhere else where life is supposedly better.