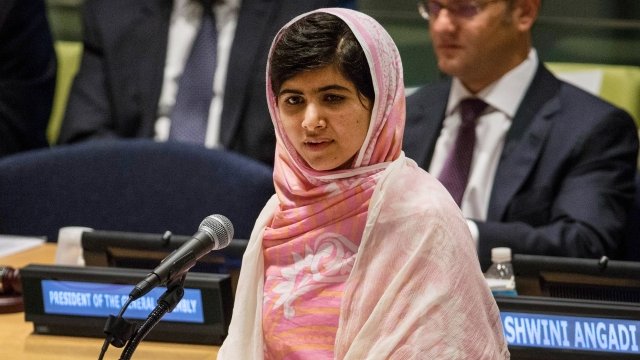 But then again, that award has lost some luster in the modern era.

Besides, it never mattered to her. The fame Malala Yousafzai has achieved wasn’t what she sought nor desired, and she’s handling it with great aplomb. She did deserve it, and many people felt she was ‘robbed’, like humanitarian rights activist Lela Gilbert.

I was reminded of Malala’s story — she became a well-known champion of women’s education as an eleven-year-old child in Pakistan, writing her own blog and demanding education for girls in her Swat Valley community.

Then almost exactly a year ago, she was rewarded for her efforts with a Taliban bullet to the head. For a few days her life hung in the balance. She survived, thanks to a gifted British medical team.

And now on Wednesday – sixteen-years-old and gracefully garbed in a sparkling orange veil – Malala left the irrepressible Jon Stewart speechless.

We were all captivated. This amazing young woman was nominated for the Nobel Peace Prize.

She had to win!

Only a few minutes after watching the clip, I got an email announcing the Nobel Norwegian Nobel Committee’s decision: the Organization for the Prohibition of Chemical Weapons (OPCW), located in The Hague, had been awarded the 2013 prize.

I’m pretty sure I wasn’t the only person whose first reaction was a disappointed shrug.

How could that brilliant, courageous Pakistani girl be overlooked in favor of some faceless, virtually anonymous agency?

(Which hadn’t actually achieved its purpose yet, only its goal. But that’s what happened when the newly elected US President Barack Obama won the prize without having achieved anything but that election victory with promised goals, and the award seemed to embarrass even him.)

Questions linger. While we can only speculate one can’t help but wonder if there is a political reason why the secretive Norwegian Nobel Committee turned a blind eye to this daring young woman, a target of radical Islamist terrorists?

Scandinavia has certainly seen its share of Muslim rage. Riots raging in Malmo, Sweden. An epidemic of rapes in Norway. Seemingly endless threats and attempted assaults over the publication of cartoons depicting Muhammed in Denmark.

Meanwhile, the progressive leadership in the region has persistently clung to the idea that these events have been symptoms of economic inequality, not of any politico/religious agenda against western culture.

(Or women and girls, which is somehow even more unspeakable to some jittery correctness groups.)

Is it safer for the Nobel Committee to ignore the reality of radical Islamist violence than to risk putting a spotlight on it?

Is it more comfortable to brush off Malala Yousafzai’s story as an unfortunate but isolated incident in some remote village?

Or is it simply politically incorrect to applaud her?

Malala has, indeed, put a face on the threat of terrorism, on the absence of women’s rights in radical Muslim countries, on the bloodthirsty mindset of those who hate western ideas – such as education – and on the indomitable courage of a real, modern-day hero.

And it gave her a voice and a platform from which to amplify it, and she’s captivating the world.

If she’d had the chance before the bullet was fired, she would have delivered a clear message to the Pakistani Taliban extremist who shot her in the head a year ago: “You can shoot me, but listen to me first. I want education for your sons and daughters. Now I have spoken, so do whatever you want.”

That was what Malala Yousafzai told a spellbound World Bank audience Friday.

And everyone else paying attention.

On Friday, in an hour-long exchange with World Bank President Jim Yong Kim, Yousafzai spoke with poise, passion and flashes of wry humor as she repeatedly urged her listeners — including about 50 female students from area private schools — to stand up for girls’ education and rights.

“I am proud to be a girl, and I know that girls can change the world,” she said to a burst of applause from hundreds of bank employees and guests in the bank’s soaring atrium. “If a terrorist can change someone’s mind and convince them to become a suicide bomber, we can also change their minds and tell them education is the only way to bring humanity and peace.”

Over the weekend, I attended the Chicago International Film Festival screening of ‘Honor Diaries‘, with producer Paula Kweskin and featured participant Raheel Raza. Before the screening, I told Raheel I thought Malala should have been awarded the Nobel Prize. She calmly and confidently shook her head, and said it didn’t matter right now, it’s about spreading awareness. And she was certain Malala would be recognized in the future.

To which I have this response: Malala is being recognized now. Raheel and Paula and the other brave, courageous, heroic and beautiful women of ‘Honor Diaries’ are doing what they can to give voice to the voiceless. I’m eager for it to be available to the world, and other women’s voices as well. Until then, I’ll lend mine to help advance the cause of human dignity for all human beings. No exceptions, anywhere.

Because “culture is no excuse for abuse” as the film testifies. And “it’s easy to break a twig; but when you bundle many