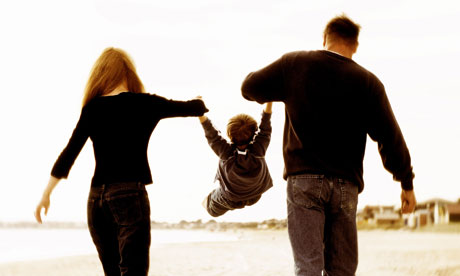 The News Story – More unmarried moms are living with partners
A new study by the National Center for Health Statistics reveals “a baby frenzy happening among unmarried couples who live together.”
According to the report, 58% of all unmarried births now occur to cohabiting couples, compared to 41% in 2002.  Reports NBC, “Although some studies show that living together may be less stable than traditional marriage, the new report shows that half of births to non-married, cohabitating women were planned.”  “We don’t feel the need to rush to the altar,” one such mother told NBC–though she also says that the couple does in fact plan to marry when they feel more financially prepared.
Finances, it seems, often play a crucial role in such decisions to forego marriage, even while welcoming children.  Child Trend senior research Elizabeth Wildsmith comments that the desire for marriage continues, but that these couples “just don’t want to get married until they are more economically secure.”
But are such couples actually sacrificing both the very financial stability they seek, and a far greater emotional stability for their children?
The New Research – Children in broken homes–twenty more years of research
Almost two decades ago, the flagship journal Social Forces published a landmark 1994 study analyzing the well-being of children living in different kinds of family structure. Now Elizabeth Thomson and Sara McLanahan, two of the authors of that original study, have published a retrospective commentary highlighting “the article’s popularity as a referent point for subsequent research” and underscoring the degree to which “subsequent research [has] confirmed many of [their] findings.”
Using nationally representative data, the original 1994 study established that children living with married biological parents enjoyed significant advantages in academic performance and socio-emotional development over children living with stepparents, cohabiting parents, divorced single mothers, and never-married single mothers. This original study traced a large fraction of this advantage to differences in household income, a smaller fraction to differences in parenting practices.
In the decades since the publication of the original study, researchers have confirmed the overall pattern it uncovered. These newer studies have, in fact, uncovered considerable evidence discrediting progressives’ claims that cohabitation is a perfectly functional replacement for traditional marriage. As Thomson and McClanahan remark, “The new research has shown that cohabiting biological parents are in many ways more similar to cohabiting stepfamilies than to married biological parents.” It turns out that both cohabiting biological parents and cohabiting stepfamilies are “economically disadvantaged in comparison to married biological parents or stepfamilies.” What is more, new studies have found that, compared to married biological parents, “cohabiting biological parents may also provide lower quality parenting” and “are more likely to separate.”
The situation is even worse when children live with a biological mother cohabiting with a man biologically unrelated to her offspring. Thomson and McClanahan cite recent research that “confirms our [1994] finding that children living with their mother and her cohabiting partner have the poorest outcomes, or are more similar to children living with single mothers than to children living with a married stepparent.” The particularly dire plight of children living in cohabiting stepfamilies cannot be “completely explained by the poorer economic circumstances or parental engagement in cohabiting stepfamilies compared with married stepfamilies.”
Besides giving researchers a fuller understanding of why non-traditional family forms may compromise children’s well-being, recent studies have given them an international perspective unavailable in 1994. In explaining the “lack of research in other welfare regimes, especially the Nordic countries,” Thomson and McLanahan stress that “single mothers [in such regimes] received greater transfers and were better off than single mothers in the United States.” However, in recent years researchers have established that these economic advantages have not erased the disadvantages children live under when they live in non-traditional families. Indeed, Thomson and McLanahan point to “recent research [that] has demonstrated quite convincingly that family structure is strongly associated with children’s well-being, even in the very generous Nordic welfare states.”
As they conclude their commentary, Thomson and McLanahan emphasize the urgent relevance of the research that has confirmed and amplified their 1994 findings on the relationship between family structure and children’s well-being: “The fact that single-, step- and cohabiting-parent families continue to grow and the fact that they are associated with poorer outcomes for parents and children means that the implications of today’s and tomorrow’s research on these topics are enormous for both individuals and the societies in which they live.”
(Source: Bryce J. Christensen and Nicole M. King, “New Research,” The Family in America, Summer 2013, Vol. 27 Number 3. Study: Elizabeth Thomson and Sara S. McLanahan, “Reflections on ‘Family Structure and Child Well-Being: Economic Resources vs. Parental Socialization,” Social Forces 91.1 [2012]: 45-53.)
This article has been republished with permission from The Family in America, a publication of The Howard Center. The Howard Center is a MercatorNet partner site.