The story of Mary Queen of Scots, packed as it is with drama and tragedy, has always been a favourite of film makers. As far back as 1895, Thomas Edison made The Execution of Mary Stuart, a short film which was the first ever to use special effects to show Mary having her head chopped off.

Since then, the doomed Scottish queen has been the subject of numerous biopics, ranging from Katharine Hepburn’s Mary of Scotland (1936) to the new Josie Rourke film Mary Queen of Scots, starring Saoirse Ronan as Mary.

When news media cover period dramas, historians are always asked if they are accurate. As far as the new Rourke film is concerned, the answer is no, of course not.

Yet again audiences will come away thinking that she met Elizabeth I in person; there was a romantic involvement between Mary’s husband Henry Stewart Lord Darnley and her Italian secretary David Rizzio; and that 16th century Scots were wild and uncultivated.

Compared to its predecessors, however, Rourke’s film does quite well at blending the established narrative about Mary with creative licence.

The 1971 film of Mary’s life, starring Vanessa Redgrave and Glenda Jackson, had the two queens meeting not once but twice. The 1936 movie was generally criticised for its melodramatic portrayal of Mary.

And let’s not even address the wildly inaccurate treatment of Mary and the Anglo-Scottish relationship in the 1998 and 2007 biopics of Elizabeth I, starring Cate Blanchett.

Yet while tallying points on the historical scorecard in films is always fun, it’s harder to criticise film makers here than over many other historical events.

The reality is that it’s highly problematic to think in terms of the “truth” about Mary because right from the beginning, all the historical sources have polarised into two wildly different accounts of to what extent she influenced the events of her demise.

Everyone agrees that Mary returned to Scotland from France in 1561 to become the active monarch, and that her reign started well and began to crumble after she married her cousin Lord Darnley in 1565. The marriage soon fell apart and Darnley was murdered by an explosion two years later.

Mary quickly married the Earl of Bothwell, and was forced to abdicate by rival nobles who objected to him becoming so closely interlinked with the throne. She ended up imprisoned before fleeing to England in 1568, where she was jailed again, in large part because of the threat she posed to Elizabeth as a rival to the throne.

She remained in captivity until she was executed in 1587.

The disagreement turns on whether Mary was essentially a blameless victim or scheming perpetrator.

Did she have a hand in Darnley’s death, in collusion with his possible murderer Bothwell? Did she marry Bothwell willingly or was she effectively forced because he had raped her? Was she actually involved in the Babington Plot against Elizabeth which resulted in her execution?

The two competing narratives sprang up from the moment Mary was forced off the throne in favour of her 13-month-old son, James VI.

The intellectual and poet George Buchanan wrote one version, initially in his scurrilous 1571 tract De Maria Regina Scotorum. He smeared her as a lascivious whore who colluded with Bothwell in Darnley’s murder and helped her lover to seize the Scottish throne.

The victim narrative was created by Catholic writers like John Leslie, Bishop of Ross, who was one of Mary’s leading agents during her English captivity. Leslie’s 1569 text celebrated her Catholic piety and condemned her removal from the Scottish throne as an act of highest treason against the rightful Stewart monarch. 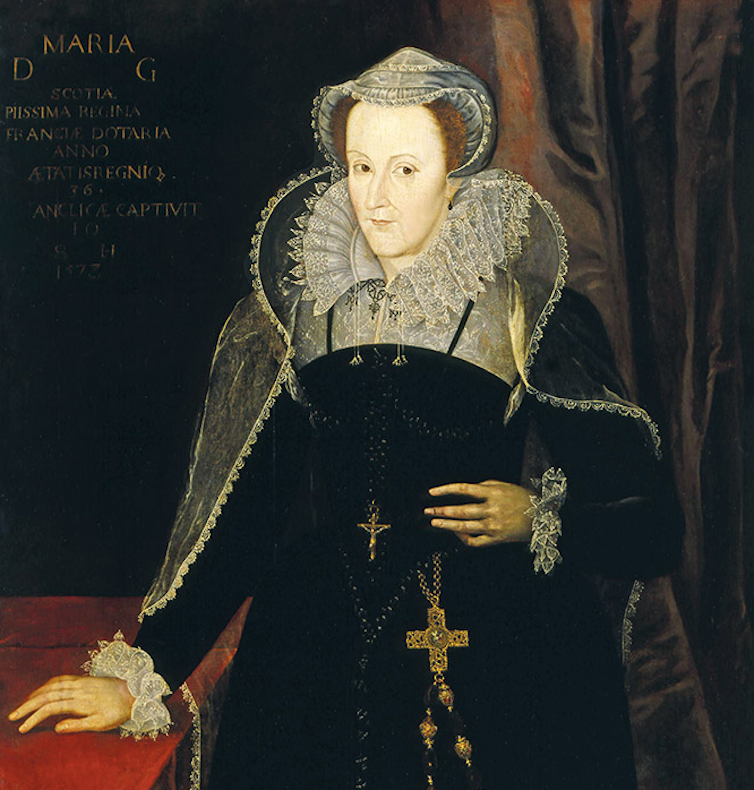 The same binary approach to Mary continues to the present day. During the civil wars of the mid-17th century, everyone compared her to her grandson Charles I.

Royalists claimed they were both examples of how ambitious opponents have cast down the lawful monarch. Pro-republicans like John Milton countered that she was the source of Charles’s deceitful and evasive nature, and a moral warning of Stewart tyranny to come.

In the Victorian era, Mary’s critics built on Buchanan’s negative image of her, influenced to some extent by Presbyterian bias.

Defenders excused Mary’s failings on account of her youth, gender, and a French upbringing which ill-prepared her to rule Scotland. Modern historians have been far better at viewing Mary in the context of her gender in a highly patriarchal society, but still divide vehemently.

The late Jenny Wormald received death threats for her unrelentingly harsh critique in 1988; while John Guy took the process full circle with a staunch defence of Mary in 2004.

We know less about public perceptions of Mary down the centuries. Indeed, I’m involved in a new two-year research project at the University of Glasgow, with more than 40 academics and curators, partly to understand this better.

We know, for instance, that in the 18th century, Mary was curiously absent from the propaganda of the Jacobites battling to return the Stewarts to the British throne through Bonnie Prince Charlie. This might have been because the attempts to restore her to power had always failed. 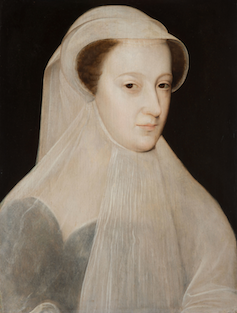 We also know that the imagery of Mary has consistently presented her as a martyr. What are believed to have been authentic likenesses of Mary were produced during her time as a youth in France – most notably the 1559 deuil blanc (white veil) portraits mourning the death of her first husband, François II.

But while Mary was highly fashion conscious and wore a huge range of colours and outfits – a fact captured well in the new film – she’s almost always seen dressed like in the image earlier in the article: a black gown with a widow’s cap, high white collar, tightly bound hair and rosary and crucifix.

This is derived from contemporary accounts of what she wore in captivity and at her execution. But in a similar way to images of Robert Burns, these details would stay the same over the years while her face, body size and shape have varied hugely.

The films of Mary have also been consistent, depicting her mainly as a sympathetic, strong heroine. It may or may not be the real Mary; we will never know for sure. So there isn’t a lot of point in worrying about historical accuracy when it comes to this Scottish icon.

Take her as you find her, and rest assured that it won’t be long before Hollywood decides to serve up another new version for mass consumption.

Steven Reid is Senior Lecturer in Scottish History at the University of Glasgow. This article is republished from The Conversation under a Creative Commons license. Read the original article.