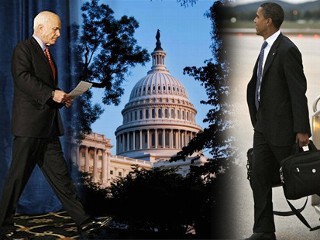 Not that running for president for about two years isn’t a demanding
task. But they are senators, after all, and the country is facing this
dire economic threat. They belong in Washington.

That’s where they’re both heading today, to cast their votes on the bailout package before the Senate.

This bill has a better chance of getting passed than the House version.

Congressional leaders seldom call a vote unless they
know the outcome beforehand. House leaders miscalculated Monday,
resulting in an unexpected defeat for the bailout. Now sweeteners are
under discussion to lure dissenters in both parties.

The “both parties” part can’t be over-stressed. Partisan politics
have become toxic in this country, and that largely defeated this bill
in the House on Monday.

The bill’s failure in the House amounted to a colossal
repudiation of the nation’s leaders, including President Bush and his
would be successors, Democrat Barack Obama and Republican John McCain,
and House leaders. Each has chillingly described the emergency
intervention as vital to forestalling a deep economic contraction that
could pull millions of working people into its vortex.

Aides described a scene of miscalculation and miscommunication
between House Speaker Nancy Pelosi, D-San Francisco, and her Republican
counterpart, Minority Leader John Boehner of Ohio, that will have to be
overcome before any re-vote is taken.

That was the widely-covered fractious debate and vote in the House
Monday. The good bi-partisan efforts in the House weren’t widely
covered. What a juxtaposition of Congressional attitudes at so critical
a time as this.

…Pelosi’s highly charged partisan style, delivered at
exactly the moment when she needed to rally every member for what
everyone knew was a tense, close and politically fraught vote of great
consequence, stood in sharp contrast to the bipartisan call for
national unity delivered by her own top lieutenant, Maryland Democrat
Steny Hoyer, and by Boehner. They, unlike Pelosi, received strong
applause after they spoke.

Hoyer stood to congratulate Boehner “for his courage” and called out
by name as his friends the Republican as well as Democratic leaders,
Bush, Obama and McCain, saying “on this day of consequence, let us meet
the challenge … let us be the best of the people’s House.”

That will have to wait until the end of the week. For now, the
people are looking to the people’s Senate. Where our two presidential
candidates are calling on their parties to back this rescue plan for
the people they serve right now.

Like my friend, Michelle, who just wrote this in an email:

They shouldn’t pass something just to pass it but
something needs to be done about this & done now – if this
continues & banks can’t lend money for those of us on payroll that
means our companies can’t borrow money from the bank for payroll. This
isn’t just a high level problem. This will start hurting main street –
it already has… I know way too many people who have lost their jobs
this past month b/c companies are merging or closing. When you have
friends who can’t pay bills you realize what a problem this is.

I’ve been hearing personal stories all week of how this is impacting
people right now, and they probably represent the majority of the
country. We’re all affected by this.

It’s a financial and economic crisis alright, but at core this (and all news stories) have a moral dimension. The article in the Vatican newspaper
(in a post below) addresses that. Look again at the analysis from the
founder of ‘Socially Responsible Italia’, who spoke at a seminar on
social development and financial markets at the Pontifical Gregorian
University recently.

Nations need to reconsider now-debunked economic
theories from the last century and create new rules that favor
long-term growth and investments that involve “measured and manageable
risk”, he said.

Businesses and stockholders should also engage in “value sharing” in
which they choose investment opportunities not solely for their chances
at reaping a profit “but as an opportunity to contribute to the common
good” and sustainable development.

He and other speakers emphasized the importance of having banking
institutions and foundations concentrate on helping the local
communities in which they are based.

Any chance we can start that right now?