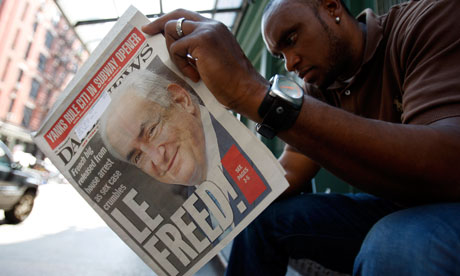 Feminists in high places should be hanging their heads in shame. In their desperation to avenge all women victims of sexual assault they gleefully seized on highly dubious and probably fabricated rape claims of one (apparently wealthy, according to mysterious bank transfers) African immigrant woman against a rich, powerful white man.

Rushing to judgment before any substantial investigation or trial, and aided and abetted by a New York Police Department and a prosecutor bent on re-election, they recklessly trashed the reputation of one man for their own ideological ends, even making bizarre links with France’s burka ban. In their eyes, Dominique Strauss-Kahn had become the grotesque symbol of all that was rotten in the state of patriarchy (and especially in “sexist” France) and therefore not worthy of the minimum presumption of innocence before proved guilty. Willing accomplices to his crime, French women in their entirety were also put in the dock.

Who could forget Katha Pollitt in US left-wing bible The Nation scorning “pathetic” French women “rising in defence of their right to be pawed by their bosses” and dismissing French feminism as a “small and conflicted” movement that effectively condones sexual predators. DSK’s wife, Anne Sinclair, was a special target of the woman-hating feminist brigade. The spectacle unleashed hysteria and bloodthirstiness rarely seen outside an Arthur Miller play, Philip Roth novel, or Harper Lee’s classic American tale of alleged rape and race in a small town, To Kill a Mockingbird.

The profile of the evil sexual aggressor trying to flee the crime scene was constructed thanks to the NYPD and prosecutor’s office. They briefed journalists on and off the record about DSK having been a “man in a hurry” who left his mobile phone behind (ie, guilty). According to their too-perfect narrative, his alleged victim, a pious Muslim refugee and single mother, was “traumatised” by a brutal sex attack. Meanwhile, they demanded the most draconian of bail conditions, and released all the salacious details of her now-apparently unsubstantiated and perhaps invented accusations, while allowing the publication of illegal photos of DSK looking appalling in Rikers Island.

After all the triumphal declarations of the superiority of US justice and American relations between the sexes, and protests that this had nothing to do with old-fashioned Yankee puritanical hang-ups, our US allies have scored an embarrassing own goal. The transatlantic polemics ring hollow as the New York prosecutor, Cyrus Vance, has gone to court to declare the accuser’s lack of credibility, and request DSK’s release from house detention.

Feminist ideologues such as The Nation’s Pollitt or gender studies guru Joan Scott and their legions of internet fem-activists, along with the woefully unprofessional New York Police Department and prosecutor – who should resign over this failure – have done women a gross injustice. They have cavalierly endangered the possibility that future victims of sexual assault will come forward, be heard and seen as credible. Commentators spoke of a “before and after DSK moment”, but what about before and after the maid, Nafissatou Diallo, who is now being labelled a “hooker”. Could there be a worse outcome for women and feminism?

Maliciously, leading feminists in the US, Britain and as far afield as Italy and Africa, exploited this case for venal point-scoring against the French women’s movement and its leading lights with their disavowal of an Anglo-American battle of the sexes. Mainstream French feminists have long resisted such binary classifications of most men as potential rapists and protested their right to participate in the pleasures of seduction. They should be vindicated by this turnaround.

There will be those who will suggest that politicians such as DSK should not be engaging in any extra-conjugal sexual activity and, if they do, it serves them right. That is certainly one philosophical and moral argument, and the revelations about DSK’s proclivities and indeed other accusations of harassment and worse may well rightly preclude him from a presidential run.

However, the third-wave feminist dogma that every woman who accuses a man of sexual assault is by definition an innocent victim who must be believed, and her alleged attacker automatically a lying rapist (because any woman who dares to speak out is therefore infallible) always smacked of dictatorship. By dispensing with basic precepts of fairness, nearly all sexual relations between men and women can be depicted as perverted acts of male power and domination. It is a distorted and impoverished view of human relations that devalues both consensual sexual contact and especially those women who have endured assaults and rape.

There is no point awaiting a mea culpa from the feminist luminaries and media commentators, bitter academics and one-eyed activists who assumed that DSK was a sexual predator drunk on droit de seigneur and 100 per cent guilty of rape. It will not be forthcoming, such is the inherent dishonesty now disabling the heart of a once noble movement. Indeed the rewriting of history has already begun with Vagina Monologues author Eve Ensler publishing a barely comprehensible ramble in The Guardian trying to justify feminism’s failings, with not one sliver of humility over its misjudgment. “But the collapse of this case is not the worst thing that could happen: that would be for us all to retreat into our corners, to retrench our polarised positions.”

Ensler should ask how feminists could have been so easily fooled, or at least why they could not have exercised a little more restraint pending investigation and trial.

Emma-Kate Symons is a writer based in Bangkok and Paris. This article has been republished with permission from The Australian.

none More by Emma-Kate Symons