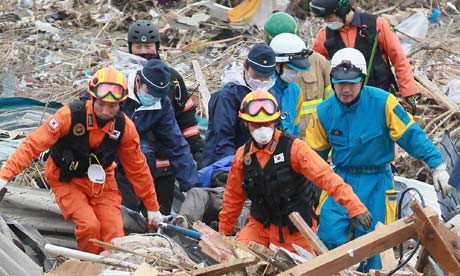 Japan needs a miracle. So do we all.

An 80-year-old woman and her 16-year-old grandson were rescued Sunday after being buried under rubble for nine days after the worst recorded earthquake in Japanese history and a massive tsunami toppled their home.

The two were trapped in their kitchen after the magnitude 9 temblor struck March 11 and survived by wrapping themselves in towels and eating yogurt and drinking, water, milk and Coke, Japanese news reports said.

Where they were trapped was providential. How the 80 year old grandmother reacted to such life-threatening adversity was positively noble. Her legs had been pinned under a refrigerator. But…

Sumi Abe was able to say her name and to tell rescuers that she was unhurt.

How many of us would say ‘I’m okay’, after all that? It’s an honorable moment for the triumph of the human spirit.

The chance of survival so long after such a two-prong disaster is considered minuscule.

But, the story notes, “more and more victims are being recovered.” So out of this dreadful and destructive ordeal, comes life and hope.