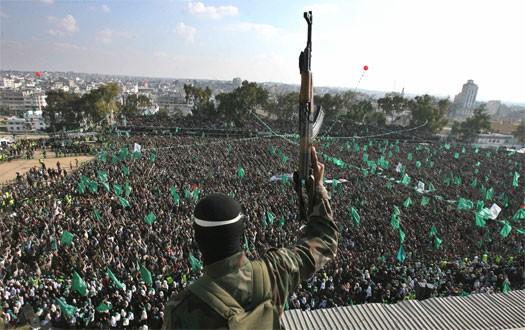 There was one striking thing missing from the events in the Middle East in past months:
Israel. While certainly mentioned and condemned, none of the
demonstrations centered on the issue of Israel. Israel was a side issue
for the demonstrators, with the focus being on replacing unpopular
rulers.

This is odd. Since even before the creation of the state of Israel,
anti-Zionism has been a driving force among the Arab public, perhaps
more than it has been with Arab governments. While a few have been
willing to develop open diplomatic relations with Israel, many more have
maintained informal relations: Numerous Arab governments have been
willing to maintain covert relations with Israel, with extensive
cooperation on intelligence and related matters. They have been
unwilling to incur the displeasure of the Arab masses through open
cooperation, however.

That makes it all the more strange that the Arab opposition movements
— from Libya to Bahrain — have not made overt and covert cooperation
with Israel a central issue, if for no other reason than to mobilize the
Arab masses. Let me emphasize that Israel was frequently an issue, but
not the central one. If we go far back to the rise of Egyptian President
Gamal Abdel Nasser and his revolution for Pan-Arabism and socialism,
his issues against King Farouk were tightly bound with anti-Zionism.
Similarly, radical Islamists have always made Israel a central issue,
yet it wasn’t there in this round of unrest. This was particularly
surprising with regimes like Egypt’s, which had formal relations with Israel.

It is not clear why Israel was not a rallying point. One possible
explanation is that the demonstrations in the Islamic world were focused
on unpopular leaders and regimes, and the question of local governance
was at their heart. That is possible, but particularly as the
demonstrations faltered, invoking Israel would have seemed logical as a
way to legitimize their cause. Another explanation might have rested in
the reason that most of these risings failed, at least to this point, to
achieve fundamental change. They were not mass movements involving all
classes of society, but to a great extent the young and the better educated.
This class was more sophisticated about the world and understood the
need for American and European support in the long run; they understood
that including Israel in their mix of grievances was likely to reduce
Western pressure on the risings’ targets. We know of several leaders of
the Egyptian rising, for example, who were close to Hamas yet
deliberately chose to downplay their relations. They clearly were
intensely anti-Israeli but didn’t want to make this a crucial issue. In
the case of Egypt, they didn’t want to alienate the military or the
West. They were sophisticated enough to take the matter step by step.

A second thing was missing from the unrest: There was no rising, no
intifada, in the Palestinian territories. Given the general unrest
sweeping the region, it would seem logical that the Palestinian public
would have pressed both the Palestinian National Authority (PNA) and
Hamas to organize massive demonstrations against Israel. This didn’t
happen.

This clearly didn’t displease the PNA, which had no appetite for
underwriting another intifada that would have led to massive Israeli
responses and disruption of the West Bank’s economy. For Hamas in Gaza,
however, it was a different case. Hamas was trapped by the Israeli-Egyptian blockade.
This blockade limited its ability to access weapons, as well as basic
supplies needed to build a minimally functioning economy. It also
limited Hamas’ ability to build a strong movement in the West Bank that
would challenge Fatah’s leadership of the PNA there.

Hamas has been isolated and trapped in Gaza. The uprising in Egypt
represented a tremendous opportunity for Hamas, as it promised to create
a new reality in Gaza. If the demonstrators had succeeded not only in
overthrowing Hosni Mubarak but also in forcing true regime change — or
at least forcing the military to change its policy toward Hamas — the
door could have opened for Hamas to have increased dramatically its
power and its room to maneuver. Hamas knew that it had supporters among a
segment of the demonstrators and that the demonstrators wanted a
reversal of Egyptian policy on Israel and Gaza. They were content to
wait, however, particularly as the PNA was not prepared to launch an
intifada in the West Bank and because one confined to Gaza would have
had little effect. So they waited.

For Hamas, a shift in Egyptian policy was the opening that would
allow them to become militarily and politically more effective. It
didn’t happen. The events of the past few months have shown that while
the military wanted Mubarak out,
it was not prepared to break with Israel or shift its Gaza policy. Most
important, the events thus far have shown that the demonstrators were
in no position to force the Egyptian military to do anything it didn’t
want to do. Beyond forcing Mubarak out and perhaps having him put on
trial, the basic policies of his regime remained in place.

Over the last few weeks, it became apparent to many observers,
including the Hamas leadership, that what they hoped for in Egypt was
either not going to happen any time soon or perhaps not at all. At the
same time, it was obvious that the movement in the Arab world had not
yet died out. If Hamas could combine the historical animosity toward
Israel in the Arab world with the current unrest, it might be able to
effect changes in policy not only in Egypt but also in the rest of the
Arab world, a region that, beyond rhetoric, had become increasingly
indifferent to the Palestinian cause.

Gaza has become a symbol in the Arab world of Palestinian resistance and Israeli oppression. The last war in Gaza, Operation Cast Lead,
has become used as a symbol in the Arab world and in Europe to generate
anti-Israeli sentiment. Interestingly, Richard Goldstone, lead author
of a report on the operation that severely criticized Israel, retracted
many of his charges last week. One of the Palestinians’ major
achievements was shaping public opinion in Europe over Cast Lead via the
Goldstone Report. Its retraction was therefore a defeat for Hamas.

In the face of the decision by Arab demonstrators not to emphasize
Israel, in the face of the apparent failure of the Egyptian rising to
achieve definitive policy changes, and in the face of the reversal by
Goldstone of many of his charges, Hamas clearly felt that it not only
faced a lost opportunity, but it was likely to face a retreat in Western
public opinion (albeit the latter was a secondary consideration).

The Advantage of Another Gaza Conflict for Hamas

Another Israeli assault on Gaza might generate forces that benefit
Hamas. In Cast Lead, the Egyptian government was able to deflect calls
to stop its blockade of Gaza and break relations with Israel. In 2011,
it might not be as easy for them to resist in the event of another war.
Moreover, with the uprising losing steam, a war in Gaza might
re-energize Hamas, using what would be claimed as unilateral brutality
by Israel to bring far larger crowds into the street and forcing a
weakened Egyptian regime to make the kinds of concessions that would
matter to Hamas.

Egypt is key for Hamas. Linked to an anti-Israel, pro-Hamas Cairo,
the Gaza Strip returns to its old status as a bayonet pointed at Tel
Aviv. Certainly, it would be a base for operations and a significant
alternative to Fatah. But a war would benefit Hamas more broadly. For
example, Turkey’s view of Gaza has changed significantly since the 2010 flotilla incident
in which Israeli commandos killed nine Turkish civilians on a ship
headed for Gaza. Turkey’s relationship with Israel could be further
weakened, and with Egypt and Turkey both becoming hostile to Israel,
Hamas’ position would improve. If Hamas could cause Hezbollah to join
the war from the north then Israel would be placed in a challenging
military position perhaps with the United States, afraid of a complete
breakdown of its regional alliance system, forcing Israel to accept an
unfavorable settlement.

Hamas had the same means for starting a war it had before Cast Lead
and that Hezbollah had in 2006. It can still fire rockets at Israel. For
the most part, these artillery rockets — homemade Qassams and mortars,
do no harm. But some strike Israeli targets, and under any
circumstances, the constant firing drives home the limits of Israeli
intelligence to an uneasy Israeli public — Israel doesn’t know where the
missiles are stored and can’t take them out. Add to this the rocket
that landed 20 miles south of Tel Aviv and Israeli public perceptions of
the murder of most of a Jewish family in the West Bank, including an
infant, and it becomes clear that Hamas is creating the circumstances
under which the Israelis have no choice but to attack Gaza.

After the first series of rocket attacks, two nations intervened.
Turkey fairly publicly intervened via Syria, persuading Hamas to halt
its attacks. Turkey understood the fragility of the Arab world and was
not interested in the uprising receiving an additional boost from a war
in Gaza. The Saudis also intervened. The Saudis provide the main funding
for Hamas via Syria and were themselves trying to stabilize the
situation from Yemen to Bahrain on its southern and eastern border; it
did not want anything adding fuel to that fire. Hamas accordingly
subsided.

Hamas then resumed its attack this weekend.
We don’t know its reasoning, but we can infer it: Whatever Turkey,
Saudi Arabia, Syria or anyone else wanted, this was Hamas’ historic
opportunity. If Egypt returns to the status quo, Hamas returns to its
trap. Whatever their friends or allies might say, missing this historic
opportunity would be foolish for it. A war would hurt, but a defeat
could be turned into a political victory.

It is not clear what the Israelis’ limit is. Clearly, they are trying
to avoid an all-out assault on Gaza, limiting their response to a few
airstrikes. The existence of Iron Dome, a new system to stop rockets,
provides Israel some psychological comfort, but it is years from full
deployment, and its effectiveness is still unknown. The rockets can be
endured only so long before an attack. And the Goldstone reversal gives
the Israelis a sense of vindication that gives them more room for
maneuver.

Hamas appears to have plenty of rockets, and it will use them until
Israel responds. Hamas will use the Israeli response to try to launch a
broader Arab movement focused both on Israel and on regimes that openly
or covertly collaborate with Israel. Hamas hopes above all to bring down
the Egyptian regime with a newly energized movement. Israel above all
does not want this to happen. It will resist responding to Hamas as long
as it can, but given the political situation in Israel, its ability to
do so is limited — and that is what Hamas is counting on.

For the United States and Europe, the merger of Islamists and
democrats is an explosive combination. Apart, they do little. Together,
they could genuinely destabilize the region and even further undermine
the U.S. effort against jihadists. The United States and Europe want
Israel to restrain itself but cannot restrain Hamas. Another war,
therefore, is not out of the question — and in the end, the decision to
launch one rests with Hamas.

The Arab Risings, Israel and Hamas is republished with permission of STRATFOR.