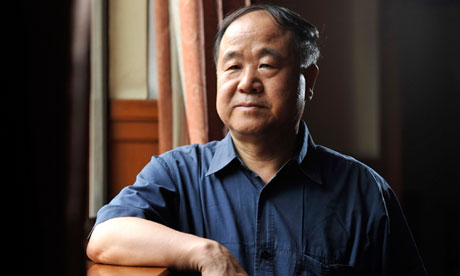 Back in 2012, Michael wrote a piece about Guan Moye, the Chinese author who writes under the pen name of Mo Yan, who was the winner of the Nobel Prize for Literature that year. He wrote a novel entitled Wa, or “Frogs” which has just been translated into English and has been reviewed in the New York Times Sunday Book Review. What is interesting about this book from our point of view is that Guan Moye/Mo Yan is critical of the Chinese one child policy and the book portrays aspects of the horrific policy and its effects on both abortionists and mothers.

Although Guan Moye has received criticism for becoming a Communist Party lacky (for becoming Vice-Chairman of the state writers’ association, for stating that cencorship falls within the same category as airport security) there is no doubt that his novel Wa is highly critical of the Communist Party’s one child policy. Julia Lovell describes the plot:

“Set in the rural northeast, the novel focuses primarily on the life and times of the narrator Xiaopao’s aunt, Gugu, from her birth in 1937 to her retirement in the early years of this century. In the brave new world of the early People’s Republic, Gugu possesses impeccable political credentials … she trains as a midwife in the new medical schools and becomes a star obstetrician in the area around her home village…[After her husband defects to Taiwan and she is maltreated by the party during the Cultural Revolution] She vows to prove her devotion by ruthlessly implementing the government’s policy against unauthorized births, which was introduced in the late 1970s after Mao’s death. Aided by her steadfast intern, Little Lion, Gugu imposes a reign of terror involving compulsory IUDs, vasectomies and late-term abortions. Eventually, after two women die at her hands (including the narrator’s wife), Gugu’s zeal for “family planning” fades. In retirement, she devotes herself to making thousands of dolls representing the fetuses she destroyed.”

In many respects Wa treads a similar path to Ma Jian’s A Dark Road which we blogged about nearly two years ago. Lovell makes the same connection, although she points out the differences between the two novels:

“On the face of it, the two books are very different. Ma Jian’s is, for the most part, written in a spare, matter-of-fact tone that projects a relentlessly desolate view of China. Mo Yan, by contrast, favors a language of excess, notable for its manic mix of registers, for its graphic descriptions of gore, for its crude and hyperbolic dialogue (“One sniff tells me what kind of fart you’ve just laid”) and for its facetious in-jokes about famous foreign writers (García Márquez and Joyce being two particular favorites). Mo Yan’s portrayal of the pursuit of women carrying unauthorized fetuses sometimes verges troublingly on the slapstick.”

However, she concludes that at a deeper level, the two are similar in that they:

“Both describe a country that has lost its way, a land in which a repressive state has rendered individuals incapable of making independent moral judgments about political, economic and social behavior and in which women continue to suffer at the hands of reckless male politicians and son-fixated husbands.”

And that’s to say nothing of the millions of babies (both male and female) killed, ripped up to pieces in their mother’s womb, poisoned and sucked out and thrown away as a result of the policy. Yes there is no doubt that the one child policy is stark evidence of a repressive state which has led its country astray. The one child policy is barbaric, inhumane, unjust, bloody and evil. We need more inside stories like those of Mo Yan and Ma Jian to jolt us into realising just how awful it is. May the terrible policy be done away with soon and may the Chinese people be delivered from the tyranny that imposes it.