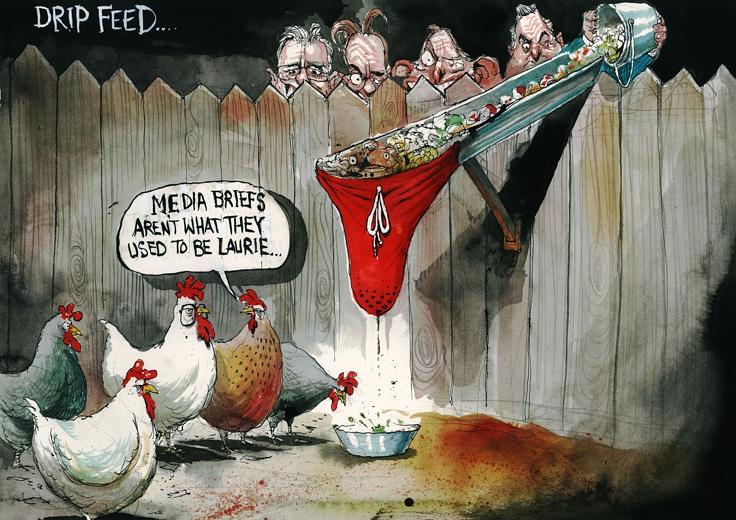 MELBOURNE, VICTORIA. In what is clearly becoming a drip feed exercise, Dr Brian Owler, head of Premier Daniel Andrews’ advisory panel charged with creating an assisted suicide law for Victoria, has been talking in the pages of The Australian newspaper (again) about the supposed safeguards he and his team are working on.

The latest supposed “safeguard” is what they’re calling a “time to live” option. Whereas the original recommendation of the parliamentary committee was that assisted suicide be made available in the last “weeks and months” of life, Owler’s committee wants to make that definition clearer at a fixed point. Well, supposedly clearer because Owler is not telling us where this supposed line in the sand will be drawn; not yet anyway.

Calling it “a patient’s medically diagnosed remaining life span” or what is commonly called a “prognosis” such determinations vary significantly. The longer the person has to live; the less accurate the prognostication. More than that, the determination will also differ from doctor to doctor making the imposition of any limit porous indeed. Not only porous but also impossible to gainsay with hindsight; making even deliberately fudged “guesstimates” impossible to formally challenge. It also seems a bit odd that they should determine a person’s “remaining life span” so as to deliberately shorten it!

While this latest article is mostly about trying to create the impression that the panel is thinking hard about the supposed safeguards, Owler shoots himself in the foot when he tells the journalist that Victoria needs to “avoid the pitfalls” of the Northern Territory experience of more than two decades ago:

“He (Owler) said that Victoria needed to avoid the pitfalls of the brief period of legal euthanasia in the Northern Territory 20 years ago, when three of the four people whose suicides were assisted were legally ineligible.”

Were three out of the four deaths under the short-lived Northern Territory Law for people who were “ineligible”? Kissane, Street and Nitschke, in their review of the operation of that law and the four deaths under the Act do not lay any claims of ineligibility. Though they note a number of problems in confirming eligibility and some conflict of opinion, they refrain from commenting further. Why? Because, regardless, the four people died. The supposed “safeguards” did not work for them, did not protect them – even from themselves.

What Kissane et al do make clear is that it was not difficult to circumvent the safeguards (what at least one patient described as “hurdles” to get over or around). They also noted difficulties with confirming diagnoses.

Yet the NT Act required that the person be:

Terminally Ill (as confirmed by the primary doctor)

confirmed in diagnosis by a second Medical Practitioner

seen by additional Medical Practitioners experienced in Palliative Care and with medical specialty in relation to the clients illness (if the first and/or second doctor did not have such speciality).

interviewed by a psychiatrist.

More “hurdles” or “safeguards” than any bill presented in any parliament in Australia since that time and yet 75 percent (three of the four) deaths did not fulfil the requirements of the law. Can we really expect Owler and the Premier to do any better? No charges were ever laid or contemplated (as far as we know) against Philip Nitschke or others for their involvement in these deaths even though the law still viewed assisting in suicide other than as described in the Act as a criminal offence.

Owler goes on to claim that education is the key to protect “vulnerable people”:

“What we need to do is make sure that there is education, not only for medical practitioners but for other people in the healthcare sector and also the community, so they actually understand how this works.

“This is all about balancing the issue of personal autonomy but making sure vulnerable people are protected, it is about ensuring we look at both sides of the argument.”

But Nitschke and the other medical practitioners involved in the short lived NT experiment did understand the law and “how it works”. We cannot say that they deliberately tried to get around the “hurdles” (they may have – but we simply don’t know). It may have been the patients themselves who obfuscated as one most certainly did. Breached they most certainly were.

Other than educating doctors to make sure that the doses are lethal, everything else is (or should be) a step-by-step process. The NT law was very clear and yet still problems were noted. The Canadian experience (also in its infancy) shows similar and perhaps even more disturbing anomalies appearing in their statistics.

Owler is correct to note that the issue is really between autonomy and the protection of citizens from harm. He is on shaky ground, however, when he claims that a balance can be reached that would allow people to suicide with medical assistance on the one hand while protecting people at the same time.

If the NT experience is properly understood, it tells us that no amount of safeguards will ever make any law safe from abuse. The appeal to autonomy loses its legitimacy at the very point where another person’s rights are infringed and where society’s ability to protect its own are compromised. That unsafe space existed for nine months in the Top End; it should never be allowed to happen again.