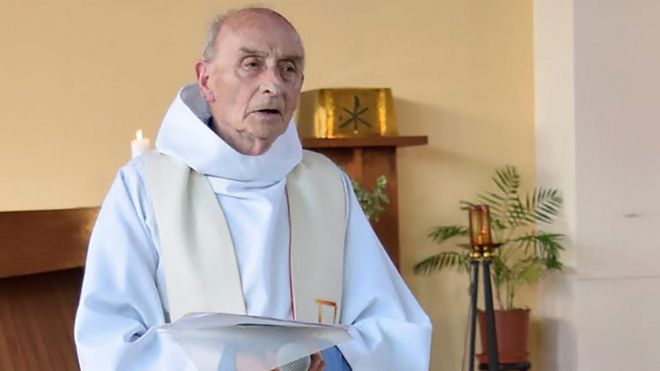 When I saw a photo of Fr Jacques, I immediately felt a surge of tenderness for his small, frail figure, so thin and so old, so similar to many other priests to whom I’m deeply indebted. They are humble people, hidden in their faithfulness, people who know how to listen, to pray, to remain faithful to their mission without making noise, without proclaiming anything, without grand gestures.

His death was full of deeply meaningful symbols for Catholics.

First of all, he was in the middle of celebrating Mass when he was martyred, like Thomas a’Becket and Oscar Romero. The Mass is the centre of worship for us Catholics, because we believe that it is the very sacrifice of Christ on the Cross. Mere bread and wine, which are the simplest things one could imagine (the bread of companionship, the wine of happiness) become the presence of Christ’s Passion.

For us Christians, this is the heart of human history, the moment which gives meaning to the life of every human being. For those who do not believe, Christ’s cross is the meek icon of an innocent who undergoes evil and violence.

Could there be a more fitting way for a faithful priest to die?

Second, he was named James, like his patron saint whose feast was celebrated on Monday, and who is remembered as the first among Christ’s apostles to have endured martyrdom.

Probably Fr Jacques never dreamed that he would die as a martyr after a lifetime as a parish priest in France. However, each and every time a priest goes to the altar, the greatest martyrdom in history is renewed.

Now World Youth Day begins. From the outside, it could be seen as a triumphal celebration. We are so numerous! We are so young! We are so handsome!

But World Youth Day has a meaning only if these young people, with all their their enthusiasm and energy, accept the cross of Christ with the same humble faithfulness of Fr Jacques, making a gift of their lives, as he did.

Their World Youth Day will be true if it is not just a festival of the springtime of life. It must become love and service to the truth and to peace, leading them, like Fr Jacques, to grow old, stooped and worn out in a life of self-giving.

Their World Youth Day should teach them to be faithful to the Mass, even going daily with the same simplicity of those parishioners who gathered around Fr Jacques that terrible morning, never imagining that they were going to see such a scene.

The life and death of Fr Jacques sends a burning message to the millions gathered at World Youth Day this week: to be like that frail old priest; to live their lives as an unending gift, to be open to the world, to their neighbours, to their God. Until the end.