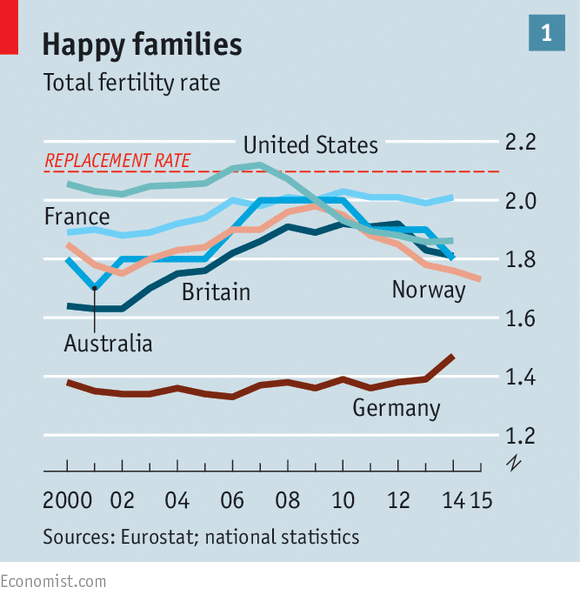 Fertility rates have remained low despite economic recovery from the Global Financial Crisis and even in countries that were never hit badly by the GFC at all, puzzling demographers. Last week The Economist questioned whether couples might need to forget about creating the perfect home and lifestyle before they start a family.

You often hear stories of couples in Auckland (the city where I live) saving furiously to buy a house before they are willing to consider having a baby. House prices have increased hugely in Auckland over the past few years, making it really tough for first home buyers. Many other cities around the world are experiencing the same thing. Is it time to move on from the idea that one needs to own one in order to have a family in cities where this has traditionally been the case? Do couples need to think about investing in shares or other forms of investment instead?

Especially given the awful stories acquaintances have related to me of mortgaging themselves to the hilt to buy a house and then only being able to afford three months off work when they do have a baby. I think I would rather rent if that was the trade-off I faced, although do understand the desire for family security through house ownership. However, it isn’t so uncommon to plan to rent for even your whole life in countries like Germany, Switzerland and Spain, and rental laws can better accommodate security for families if they are made more strigent.

The crunch was unsurprising: anxiety about jobs and money puts people off children. But a rich-world baby bust that began predictably turned into a puzzle.

Ann Berrington of Southampton University points to housing. Young and even not-so-young couples find it hard to buy property in England and Wales: 46% of 25- to 34-year-olds lived in private rented accommodation in 2014-15, up from 24% a decade earlier. Four in ten 24-year-olds still live with their parents. Home-ownership rates have fallen in America and Australia, too. The rate is rising in France, where fertility has held steady—though that might be thanks to strong pro-natalist policies.

You can have a baby in a rented flat, of course. But in a country like Britain, where earlier generations found it easy to buy homes, that seems to flout a psychological rule for some. In the 1960s Richard Easterlin, an American economist, suggested that people would avoid having children if they felt unable to bring them up in a style that at least matched the way they were raised. It might be time to dust off that idea.

Other explanations for the stubbornly low fertility rates are: that immigrants are no longer propping up rates given a drop in fertility rates among this group; and that some couples are delaying having babies not because they cannot afford them, but because of a vague feeling that family life is harder than it used to be. Whatever the cause, the trend is worrying economists because of the dire economic consequences in the long run. It is also sad for couples who miss out on the joy of having a family because they wait too long or avoid trying altogether.

At some point in my teens my dad commented to me that people could wait forever to have children if they’re waiting for a perfect situation. For some reason, his comment stuck in my mind. It now seems very apt.