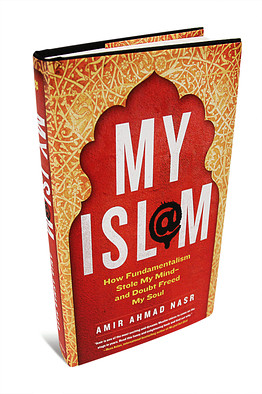 Amir Ahmad Nasr is a young Muslim on a passionate hunt for truth. He shares his quest in My Isl@m: How Fundamentalism Stole My Mind—and Doubt Freed My Soul. My Isl@m highlights some of the profound and vibrant intra-Muslim debates underway today. This is an engaging fast read accessible to Muslim and non-Muslim audiences alike.

There is an overall arc of joy in Nasr’s faith life. Yet the love he has for Islam makes his agony much more acute when he encounters expressions of Islam that seem irreconcilable with the teachings of Islam. In his childhood religious education, for example, Nasr was taught that questioning is diabolic; it is “Satan whispering to you and trying to lead you astray.” And in his childhood visits to relatives in Sudan, Muslim children were learning to hate Christians. But his childhood also included experiences of wonder and awe inspired by God; through these moments he developed a great love for his religion.

Nasr’s devotion to God and love for Islam have led him to relentless questioning. He senses that God is greater than cultural traditions and unreflective imitations of tradition. He feels, for example, that in this era of much violence and conflict, Islam deserves better than “lame, simplistic declarations that she is ‘a religion of peace.’” At a private Islamic school he attended briefly in Malaysia, what disturbed him most of all was “not the religiosity itself, but its forced imposition on us by authoritarian figures who were so adamantly self-righteous and determined to mold us as they saw fit.” When he couldn’t figure out “why religion had to be such a burden …” leaving everyone, including him, unhappy, he began to rebel.

Use of the ampersat instead of the letter “a” in the title My Isl@m reflects the centrality of the internet and social media in Nasr’s personal development, including his rebellion. As he began to move beyond blind acceptance of his religion to questioning and deep thought, the internet gave him access to diverse ideas, opinions, and perspectives.

Nasr discusses the consequences of the internet for Islam. He argues that it plays a role today in “democratizing Islamic authority, and the changing relationship dynamics between Muslims and their religious establishments in numerous communities throughout the world.” “Already,” he observes, “the religious establishments have lost and continue to lose their monopoly on the interpretation and dissemination of religious texts.” (“About damn time,” he adds, in the tone of defiant frankness that peppers the book.)

Nasr does not mince words. He describes the 2007 “Sudanese teddy bear crisis” as “a stupendously stupid and embarrassing spectacle.”

His consideration of controversial issues is refreshingly independent. He makes clear that being liberal does not necessarily mean being or becoming Western, or vice versa. He points out that there is (alas) growing illiberalism in the West itself, such as in “stridently anti-Islam, anti-Muslim” American realms of the blogosphere.

He reveals the impression of Christianity that some American Christians give Muslims. “I came to see clearly,” writes Nasr, “that in the United States, there sure are a great many not “Jesus loves you” Christians, but “salvation through Jesus only, or else burn in hell” bible [sic]-thumping Christians who are just as bigoted as their Muslim counterparts …”

He rejects both the “Western” consideration of women as sex objects, and what he calls the “paranoia” of some Muslims regarding females. Describing his education in both secular and religious schools in Malaysia, Nasr writes,

“To put it mildly, I was neither impressed by the sexual norms displayed in the Western pornography secretly distributed by some students in my old school, nor the paranoia around girls’ hijabs, hair, and hymens in my new Islamic school. Both objectify women and enforce a male-driving power paradigm in which man dominates woman.”

Still, every so often Nasr is frustratingly inconsistent. For the most part he shows great respect for girls and women. He enthuses about the Universal Declaration of Human Rights, even quoting from it at some length, and he is critical of some Muslims’  “relegation of women to a lower status.”  But at the same time he repeatedly uses the infantilizing term “girls” to refer to adult females, even while calling adult males “men.” He describes the kinds of “girls” he might marry, even though he seems like the kind of person who would reject having a child-bride, a “girl,” for himself.

Nasr’s argument is also limited by his blanket dismissal of the far-reaching intellectual and spiritual contributions of al-Ghazali (d. 1111). Al-Ghazali figured prominently in my own studies of medieval intellectual history. Nasr, however, declares his work to be essentially irrelevant to a proper knowledge of Islam in just a few pen strokes.

Ironically, I would say that in many ways al-Ghazali and Nasr are actually kindred spirits. In his classic spiritual autobiography Deliverance from Error, al-Ghazali describes his book as a record of “my daring in mounting from the lowland of servile conformism to the highland of independent investigation.” This, precisely, is the spirit of Nasr in My Isl@m.

Granted, al-Ghazali is a controversial figure among Muslims, but his works are a tremendously rich resource of Islamic intellectual and spiritual explorations. The modern tendency to dismiss al-Ghazali as “anti-reason,” which Nasr embraces, fails to do justice to al-Ghazali’s resources. Nasr’s proposal to Muslims that they reform Islam by setting al-Ghazali aside is like suggesting to Catholics that they should bypass St. Thomas Aquinas.

Nasr might be surprised at how deeply al-Ghazali shares his rejection of “dogmatism, blind reverence, and unexamined faith.” In discussing “categories of those who seek truth” in Deliverance from Error, al-Ghazali concludes,

“there can be no desire to return to servile conformism once it has been abandoned, since a prerequisite for being a servile conformist is that one does not know himself to be such. But when a man recognizes that, the glass of his servile conformism is shattered—an irreparable fragmentation and a mess which cannot be mended by patching and piecing together: it can only be melted by fire and newly reshaped.”

By the end of My Isl@m, the rigid, simplistic, triumphalist interpretation of Islam that characterizes Nasr’s early childhood sounds exactly like the conformism al-Ghazali condemns. I hope Nasr will someday probe the works of al-Ghazali more carefully.

An admirable aspect of My Isl@m is Nasr’s utter rejection of conspiracy theories about Jews; he challenges anti-Semitism among Muslims today head-on. He was raised in a context brimming with anti-Semitic rhetoric, but questioned this as he met individual Jews, first through the internet and later in person.

My Isl@m is a clarion call to Nasr’s fellow Muslims for “reforming our appallingly broken current fear-based models of religious education, and revolt against the abusive dinosaur preachers of our times …” Nasr is critical not because he is anti-Muslim. He is critical because he cares deeply about Islam.

By the end of My Isl@m, Nasr’s faith has become somewhat ambiguous. Clearly he is struggling. But his adventure in God is not over yet. The internet led him to taste free and open truth-seeking; I expect his quest for greater love for God and understanding of Islam has only just begun.

Jennifer S. Bryson, PhD, is a visiting research professor at the US Army War College in the US Army’s Peacekeeping and Stability Operations Institute in Carlisle, PA. This article has been republished from Public Discourse, a MercatorNet partner site, with permission.