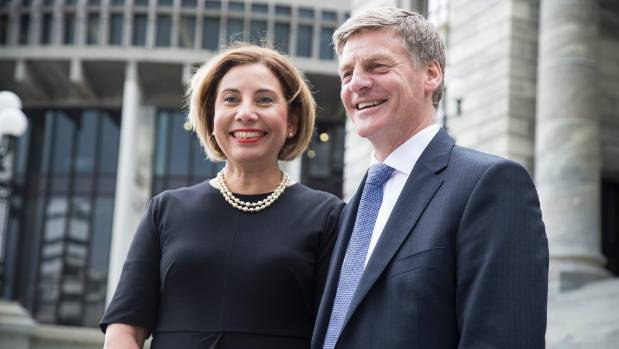 With thirty years of marriage, six kids, and a record of pro-life and pro-family voting behind him, New Zealand’s new Prime Minister, Bill English, has a pretty good record for a politician in a very secularised Western country.

Of course, he hasn’t done it all on his own. His wife, Mary, who is also a doctor, shares his values and has also defended them publicly – most recently in an oral submission to a government committee studying end-of-life issues as a result of the latest campaign for euthanasia in this country.

It’s no secret that the couple are practising Catholics, and they both come from large families. Mary is the eldest of 13 children of a Samoan father and an Italian mother, while Bill is the third youngest of 12, brought up on a farm in the south of New Zealand, helping with both farm work and domestic chores from a young age. (He famously at one stage made school lunches for most of his siblings.)

In a recent profile of the couple in the New Zealand Women’s Weekly, billed as the couple’s “private love story”, Mary said a large family was part of the plan when they married in their mid-20s:

“Bill was quite keen for a big family and I said I was up for that – as long as they were all girls!” laughs Mary. “It tempted the fates because I ended up with five sons!”

Politics being a rather brutal thing at times, Bill’s generally second-fiddle role in politics (he was deputy prime minister and finance minister under John Key, who resigned from the top job in December) has probably protected the English children while they were growing up. With five now in their twenties and the youngest 17 (the only one at home), the risks are not so great, but their opinion on dad taking on the PM’s role was sought anyway – and they were supportive.

The intrusion into Mary’s own work as a GP was another big consideration – “her career is just as important as mine,” says Bill – but she believes he will be “excellent” in the leadership.

There is an election coming up in September, and after three terms of National-Party-led government, and a change of personality if nothing else at the helm, there is a chance Bill English, with a parliamentary career stretching back to 1990, won’t be Prime Minister for very long.

Meanwhile, to judge only by the rare glimpse of their private life provided by the women’s magazine, it would be hard to find a more edifying and attractive first couple.

They met in their first year at university – he was 19 (now 55), she was 18 (now 54) – but it was almost three years before romance bloomed. In the meantime they had become “great friends” – a solid foundation for a marriage, which, still another couple of years away while they pursued study and work, would bring the demands of six children and two careers.

Temperamentally they complement each other. Naturally shy, Bill credits his strong minded and politically active mother, the late Norah English (also a pro-life warrior), with his interest in politics. But Mary, the extrovert, has helped to draw him out:

They respect the other’s work and interests: “I spend a lot of time in public life, she’s one-on-one in her surgery,” explains Bill. “People think politicians work hard – but she’s sitting there in 15 and 20-minute periods and has to get inside people’s lives to help them. I think that’s just remarkable.” When Mary started running at night, training for a marathon, he joined her, for safety’s sake.

He has done his share of finding the socks and folding the laundry. And tried not to bring work to the dinner table: “For a long time, we had the strong view that we wouldn’t have any politics at home. It was my job to get on as a father, in particular to help a very busy mother, not to sit around pontificating about politics.”

Most important, they are still in love. The journalist writing the celebrity profile observes from his little attentions during the photoshoot, “it’s clear that Bill adores his wife.”

Asked what are the secrets of a long marriage, Bill mentions seeing things from the other’s point of view, “And understanding what you really value together. Lots of things can be distractions or difficulties, but we’ve always had the family and the kids, and that’s been really important, as well as managing both of our jobs together.”

The secret to a long career in politics is perhaps less obvious. Mary says his best qualities are tolerance, humility and empathy – and that could explain a lot. Although Bill English seems to have had an easy ride in politics on the whole, there was a humiliating setback in 2002 when he led the National Party to a historic defeat. But he acknowledged his failure, did some rethinking, and then began his rise to the top again under John Key.

Key was a liberal; English is a conservative with basically Catholic values, although he has insisted in interviews that his positions on moral issues like abortion and euthanasia are personal and that he is not in government to push them.

He has voted against civil unions and same-sex marriage (which became law in New Zealand in 2013) but surprised many of us when he said in an interview after becoming Prime Minister that he would probably not do so now. His explanation: he believed it had helped gay couples and was not a threat to the institution of marriage.

At the same time he summed up his approach to government in classic conservative terms:

“The Government isn’t the answer to everything, most of our answers are in our own families and communities. Sometimes Government gets in the way of that. This is a Government that will be focussed on understanding, at a very individual level, what is going to work with people and then supporting them to achieve it.”

One can only say, Amen, to that, and wish him luck on September 23.

Carolyn Moynihan is deputy editor of MercatorNet. She lives in New Zealand.