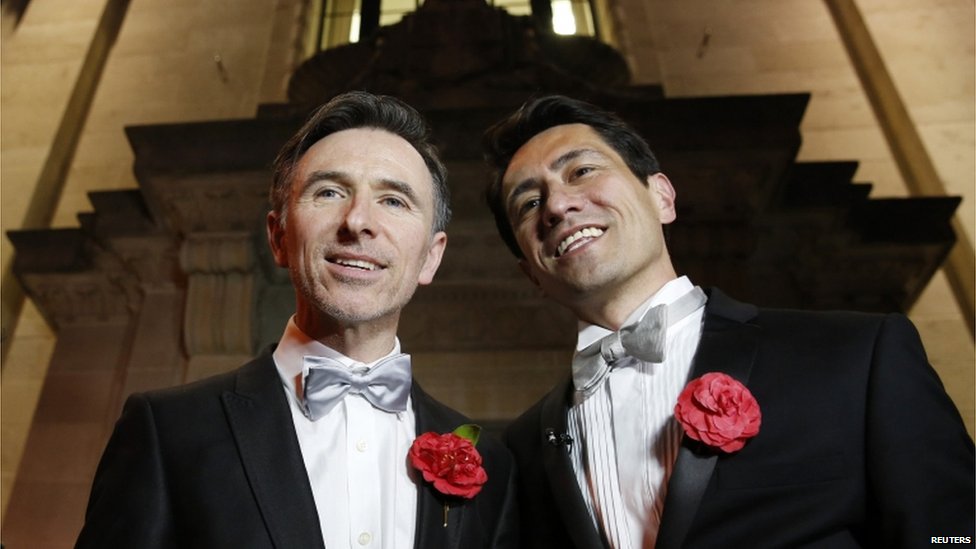 One of the first couples to take advantage of the UK law. Photo: BBC / Reuters

The first official count of same-sex marriages in the UK since they were legalised last year has been published, and it is a “disappointing” figure, according to British academic Mike Thomas:

According to figures released by the Office for National Statistics, just 1,409 same-sex couples were married in England and Wales from the end of March to the end of June 2014. This is a relatively low number in comparison to the 7,000 or so couples across the UK who entered into civil partnerships in the same period of time after they were first made available in 2005.

More seismic statistics might have been expected, given the political storm that surrounded the 2013 act that sanctioned same-sex marriage and the impact it was predicted to have on society – apocalyptic or utopian, depending on your point of view.

Thomas, a sociology lecturer who does research with same-sex couples, goes on to suggest a few reasons.

“First, civil partnerships got there first and offer pretty much all of the rights and entitlements that go with marriage.”

This is an interesting admission, indicating that in the UK, at least, there was no practical need for same-sex marriage. It was all about social recognition and acceptance, as he points out later in his piece.

Heterosexual couples do not have that option in the UK – it’s either marriage or cohabitation for them, the latter offering “relatively few legal protections,” according to Thomas. (In New Zealand, by contrast, civil unions are open to both heterosexual and homosexual couples who, together with cohabiting partners, enjoy the same rights as married couples.)

Further, UK law excludes same-sex weddings in churches, which Thomas thinks might deter some religiously minded same-sex couples from marrying at this point. He adds:

Similarly, “there will be lesbian and gay couples who see marriage as an unattractive option that is grounded in outdated, even oppressive ideas around gender and sexuality. Some of these couples might prefer civil partnerships as an option. They might see it as a blank page, something they can invent for themselves that is free of the cultural and social baggage they associate with marriage.”

That, really, would be the way to go, given that same-sex marriage is only a legal fiction, albeit one that increasing numbers of people are prepared to go along with for the time being. Thomas believes that this recognition will make a positive difference to same-sex couples’ daily lives. It will also make a difference to society at large, but we shall have to wait and see what these differences are.

Since the same-sex marriage law became effective one year ago this month, there have been 926 weddings, of which 532 are New Zealand couples, a quarter (237) are Australian and the rest from Asia and other countries. The Registrar-General of Births Deaths and Marriages enthuses:

We are seeing continued national and international interest by same sex couples in getting married in New Zealand. Almost 400 overseas couples have come to New Zealand to get married, which is great for our tourism industry.

More than 200 of the Kiwi couples had already been in a civil union. New same-sex civil unions have dropped by 80 percent over the past year, but a modest number of heterosexual couples continue to choose that option.

There were considerably more female couples taking advantage of the new law – 520 compared with 406 male.