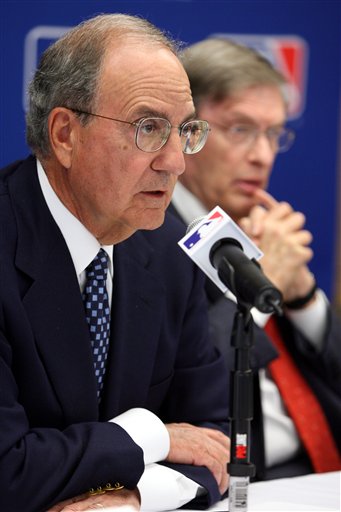 Four
score and several baseball players have been accused of cheating by
ingesting “performance enhancing” substances such as
anabolic steroids and human growth hormone.

The
accuser? Former Senator George Mitchell of Maine. The former Senator
has apparently scored big against baseball, lecturing to America
about an issue that most ordinary Americans understand far better
than he does. Mitchell’s
“private” report to major league baseball bears a
pretentious title: Report to the Commissioner of Baseball of an
Independent Investigation into the Illegal Use of Steroids and Other
Performance Enhancing Substances by Players in Major League Baseball.
The report has ruined or attempted to ruin the reputations of
athletes who now have the difficult position of trying to prove a
negative.

The
report fails fundamental tests of fairness and honesty. The evidence
he presents is at best flawed and at worst manufactured. Sports
writers have jumped on Mitchell’s bandwagon, accepting
uncritically the report’s accusations. Mitchell is in the same
position. He has nothing at stake. And, as he himself says casually
about his report, a “standard of evidence was not necessary.”
What if the MLB players association investigated the senator in the
same way? Imagine finding a few disgruntled hangers-on who were
willing to say that Mitchell did this or that, and giving them a
forum completely protected from retribution. How would former
Senator Mitchell, or most of his colleagues (or most of us), stand up
to that?

One
gets the impression that many of the people who believe the report
have not read it. Its evidence is weak. It is cloaked in and padded
by pseudo-scholarship about the history of drugs in baseball and the
effects of drugs on performance. But, in the end, the report relies
on a few documents and a few very suspect witnesses to smear players
who have, however bloated their salaries are, no way adequately to
respond.

Mitchell’s report names names, making sure to include a few that are guaranteed
to appeal to the lust of an uninformed public. He claims, sounding
innocent enough, that he gave every player whose name he was to
defame an opportunity to talk with him. The hubris of this
attitude aside, why would any man agree to prostrate himself before
an extra-legal committee to answer the equivalent question, “when
did you stop beating your wife?” Their refusal Mitchell takes
to be a sign of guilt, and therefore their names are put into the
public arena as drug abusers, to be savaged accordingly in the media.

Senator
Mitchell relies on strained logic. He says that the witnesses
against the accused players were interviewed in the “presence
of federal law enforcement agents who informed [them] that if they
made false statements they would subject themselves to possible
criminal jeopardy. So there was very strong incentives [sic] to tell
the truth.” In fact, the two, the only two, key
witnesses in his investigation are both men whose only motives for
naming names is to get prosecutorial leniency for their own
wrong-doing.

One
of the two key witnesses is Brian McNamee. He was Roger Clemens’
trainer, apparently a good one, but also the man who said that he
produced Clemens’ success in 1998 with “performing
enhancing” drugs. McNamee hung around the Yankees (after
leaving the New York City police force for reasons nobody has yet
disclosed). Then he got a job as a strength and conditioning coach.
He met Clemens in Toronto, moved back to the Yankees with him, was
fired after a murky date rape charge, and was later nabbed by
authorities for having passed along various drugs to athletes in his
care. He was the one who gave up Roger Clemens and Andy Pettite as
part of an apparent plea bargain.

In the online version of the report, two things stand out: first, there are no sources of evidence
against Roger Clemens except Brian McNamee; second, Roger Clemens did
not talk with former Senator Mitchell. Does this justify the rush to
judgment by hundreds of sports writers? Does this give us any reason
to believe Mitchell (or McNamee) and not to believe Clemens, who
through his lawyer (and now on taped releases and 60 Minutes) has
categorically denied the charges? Indeed, Mitchell “did not
think a standard of evidence was necessary.”

His
excuse, according to the Associated Press, is that it was a “private
inquiry.” It was, in fact public from the moment that Major
League Baseball commissioned it. To say that Mitchell is
disingenuous on this point is to give it a very generous
interpretation. For him to use this as an excuse for the public
execution of reputations is dishonorable. It also protects everybody
involved in the report. According
to Chicago attorney Keith Scherer,
neither Clemens nor anybody else accused in such a manner has legal
options to reply unless they can prove the negative, show that the
report’s intent was malicious, and expose virtually all aspects
of their private lives to an investigative process. As Mr. Scherer
says, “It’s hard to imagine a baseball player who would
want to let that kind of information out of the can.”

Former Senator Mitchell’s report
does not address several larger problems. What, for example, is
“performance enhancing?” Various sports give varying
answers, but nobody, including (and especially) the Food and Drug
Administration knows what enhances what and what harms what. Or take
cortisone, or other pain killing treatments that athletes in all
sports have been using from the moment they became available? What’s
the difference between shooting up to mask pain and Andy Pettite
taking some HGH to help his elbow heal a little quicker? The
potential for hypocrisy is present in any intelligent conversation
about such complicated topics. Former Senator Mitchell’s report
treats blithely a medical and moral issue too complicated for
unsubstantiated charges.

Former
Senator Mitchell needs to be reminded that he is not the ethical
arbiter in this case.

Dr John Willson has been a professor for over four decades, most
of them at Hillsdale College.

none More by John Willson