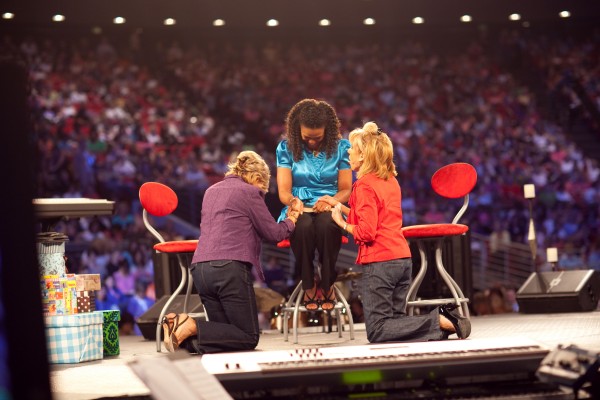 A lengthy article about evangelical women in a recent New York Times Magazine is not for the faint of heart. Though it’s titled “Housewives of God”, it delves into issues as complex as church, social, and cultural history, and the role of women’s leadership in the evangelical churches.

The essay is so broad-ranging that it is a challenge to pinpoint author Molly Worthen’s central thesis, but it seems to run thus: evangelical women with a gift for preaching, who claim to be “submissive” to their husbands and in favour of traditional views of gender, are hypocrites because they ostensibly reject feminism while reaping its benefits.

Dallas-based preacher Priscilla Shirer, for example, conducts a mega-ministry to women. She exercises leadership while her husband picks up at least half the tab for domestic and PA duties. All the while she insists that “the man is the head” and that there is a specific feminine way of being.

Ms Worthen is sceptical. I find Ms Worthen’s assumptions questionable. Here are some of my beefs with her.

In my reading of it, the whole essay turns on her suspicion of, if not rejection of, complementarity:

Many call themselves complementarians, signalling their belief that God ordained complementary — not identical or flexible — roles for men and women.

I suppose I am a complementarian, because, taking my cue from the science of biology, I believe, indeed I know that men and women are different. Based on common sense and lived experience (plus anthropology and sociology, which I have studied) I also believe that men and women have different strengths, and may have different, but complementary roles in life. Basically, these are the generative roles of mother and father, from which other roles (breadwinner, home-based parent…) may flow, although in different degrees and sometimes completely reversed. I do think that “complementary” includes “flexible” — as Mrs Shirer clearly does in practice.

To critics, “complementarian” is code for sexist patriarchy, a license to keep women muzzled and homebound.

I am home by choice. Far from being muzzled, I have worked as a tutor (to my own children and others), as a freelance writer, a motivational speaker and a blogger. Indeed, how can anyone in western society be muzzled these days? If I want to say something, anything, it can be published within seconds on my blogs, Facebook, Twitter, or any of millions of online forums.

Conservative Bible teachers like Shirer have built a new paradigm for feminine preaching, an ingenious blend of traditional revivalism, modern therapeutic culture and the gabby intimacy of Oprah. This is the biblical-womanhood-industrial complex: a self-conscious alternative to secular feminism that preaches wifely submission while co-opting some feminist ideas to nurture women like Shirer to take the lead, within limits.

“Co-opted feminist ideas”? What idea did feminism ever promote (besides the bogus contention that abortion is a human right) that was truly innovative or unique to feminism? Concepts such as co-operation, mutual respect, justice, equality, feminine strength? These ideals hearken back somewhat further than the bra-burning 1970s—perhaps even to the teachings of a certain radical New Testament rabbi, who defended women against the prejudices of his time and warned men that even looking lustfully at a woman was a violation of her dignity — and their own.

So Ms Worthen gets it exactly backward when she writes:

The only way to defeat secular feminism was to assimilate it. Conservative evangelicals stressed women’s equal merit and urged men to lead by servanthood and sacrifice, like Christ himself.

To repeat: when men (and women) are behaving in a reasonable, loving, mutually respectful and supportive fashion, they are assimilating the teachings of Jesus Christ, not secular feminism.

It’s pretty clear that Ms Worthen doesn’t care for the style of ministry that people like Mrs Shirer provide, but style is not the issue here; the issue is sexual difference, and what it means in practice:

Liberal critics of Shirer’s theology don’t mind the weeping or the titillating language. What troubles them is the suggestion that women are intrinsically different from men and therefore destined to live a different — and subordinate — Christian life.

Women are intrinsically different from men, but it does not “therefore” logically follow that we are in any way “destined” to anything. The choice of “subordinate” in this sentence is clever but misleading. It is liberally (and literally) used all over the essay to evoke an illegitimate use of (male) power. But there is nothing essentially wrong with subordination — don’t we all live with it in some form on a daily basis? Who doesn’t have a boss, a teacher, a professor, an editor or a project manager in his or her life?

The same applies in Christian life. Believers consider themselves subordinate to God, and if we belong to a denomination of any kind, we generally subordinate ourselves to church authority. But church authority represents the service Christ renders his members, and this is what Ms Worthen, though she acknowledges the idea, really fails to understand.

However, you don’t have to be a believer to accept the practicality of having an order of authority in the home. Many women can testify that it’s pretty easy to be subordinate to a husband who gives his wife and family love, respect, and every kind of support.

My husband is the head of our family; we believe it’s the best way to avoid serious conflict. We make most decisions jointly, because we do complement each other in knowledge, experience, and temperaments. But if we ever come up against a life-altering decision (careers, moving, so forth), the final decision is his. In my opinion, submitting to his decision is preferable to marital separation, not that the latter is very likely. He’s a good man; we have a good marriage. He has never yet made a decision I couldn’t live with.

In fact, the essay reveals that many women long for as much:

Ms. Worthen seems to take offense that “Shirer describes her connection with God in ways she says reflect ‘a feminine heart’.” And she finds a Christian feminist who disagrees with that too:

“There is a sense in which their identity as a Christian is tied to first not who they are in Jesus as a human being, but their gender,” says Mimi Haddad, president of Christians for Biblical Equality, an organization that takes an egalitarian stance toward men and women. In Haddad’s view, “In Scripture, it’s your humanity” that matters.

Oh? Is that why we have feminist-oriented “women’s spirituality” retreats, feminist goddess worship, and feminist women’s studies courses in every university all over the western world? Because it’s only our humanity that matters? Hypocrisy indeed. If you are a feminist, you are allowed to possess a uniquely female way of understanding. If you are a traditional woman and you think men and women are hard-wired a certain way, you are stupid and oppressed.

“Biblical womanhood” is a tightrope walk between the fiats of old-time religion and the facts of modern culture, and evangelicals themselves do not know where it might lead.

Oh my, that sounds so dire. Where might it lead? Possibly to some people having more satisfying marriages? Possibly to women finding ways to minister in the church community—ways that satisfy themselves (and their peers) but not the official credo of feminism, which necessarily, inevitably wants so much more? Possibly to a drop in popular support for state-funded feminism and its plethora of perennially useless publications and programs? Gaia forbid.

Yes, women have been and continue to be oppressed –and worse—across times, places and cultures. But I think Molly Worthen of the New York Times is looking for oppression in all the wrong places. Modern secular feminists should get over their angst at seeing happily married, contemporary, suburban, evangelical housewives—even the ones who minister to packed auditoriums of cheering fans — and spend their pent-up energy on something truly horrifying: female genital mutilation, forced marriage, child brides, stoning for adultery, sex-selective abortion, female infanticide, lack of decent maternal medical care, limited educational opportunities, dress codes that prohibit women from feeling sunlight on their faces…

Finally and fundamentally, the NYT essay seems to be flawed, because one cannot apply the ideas and values of secular feminism (or secular humanism) to how the church—any church—operates. You’re talking about approaching things from radically different perspectives. I wonder why Ms Worthen bothered with this exercise. She must be really concerned about those crowds of women who choose to listen to Priscilla Shirer. Women exercising choice in their lives: who knew that could be so offensive to feminists?