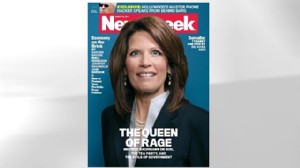 It’s getting as old and tiresome to question whether biased media realize they are biased, as it is to wonder why feminists don’t take offense in the way some women been treated by the media.

So the National Organization for Women made a noble move to carry out the integrity of its cause. I was going to blog on it, but Elizabeth Scalia has done that and here’s the highlight.

…mostly to give props to Terry O’ Neill, of the National Organization for Women, who has kept her word since declaring that “from here on” (meaning from the point of the 2010 elections) she was going to speak up when female candidates — even conservative ones — were subjected to sexism.

(Elizabeth was doubtful she’d actually do that, as many of us were, and now we’re each happy to say she did)

O’Neill did the right thing in calling out Newsweek [on its covery story of Tea Party conservative Michele Bachmann], even though it went against her grain:

“It’s the combination of they snap the photo of her with her eyes very wide – people call it ‘crazy eyed’ – plus that huge label they slap on her as the Queen of Rage,” O’Neill continued. “Her policy positions are diametrically opposed to NOW’s positions and I intend to defeat her. That’s my job. But no male politician is treated this way. As much as I disagree with everything she stands for, she is a serious viable candidate for the United States presidency and there is no male viable candidate who has ever been treated this way.”

Good for you, Terry O’Neill, for your integrity. It’s a step forward toward honest engagement of the public debate, with respect for differing opinions and ideologies. You held the higher ground of principle over the narrow partisanship of small-minded media outlets and their editors.

Please hold onto that through the upcoming campaigns. It’s going to get ugly. Let’s set the terms of engagement.