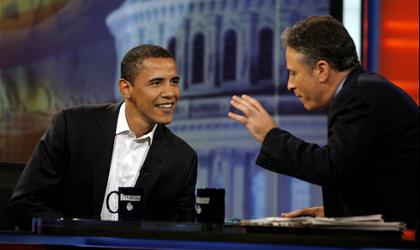 CSM’s Vox News reports that the president will be on the Daily Show Wednesday night, and right in the headline asks: Will Jon Stewart make fun of him? Short answer: no. Of course not. Silly question. And the writer knows that already…

Reason No. 1: Mr. Stewart is kind of, sort of, liberal-leaning. In a restrained “Rally to Restore Sanity” way.

Reason No. 2: It would be rude, and he would never have a chance to interview a top Democrat again. And that would be a bummer, since his show is in Washington all week, and you can spend only so much time at the Smithsonian looking at Archie Bunker’s chair and Judy Garland’s ruby slippers.

Reason No. 3: Comedy hosts, even comedy hosts who are trusted sources of actual news for millions of Americans, generally don’t ask tough questions in face-to-face interviews, no matter how unrestrained their other material is.

“Generally” is a relative term, large enough to cover for the times they distinctly do confront guests to their face with aggressive challenges. Like Stewart did to conservative columnist Peggy Noonan. And former British Prime Minister Tony Blair.

Jon Stewart hosted Tony Blair on The Daily Show Tuesday night, and he barely let the former British prime minister get a word in edgewise. Stewart evidently had some things to get off his chest, because he harangued Blair at length in one of his occasional moments of earnest seriousness.

He has those moments when he’s intent on using his platform not as the usual comedic bully pulpit but a seriously political, ideological one. He has every right to do that and a huge following that may applaud him for it. But he’s so much better when he shows the class he’s capable of and treats his guests with the respect they deserve.

He’s missed nearly all the opportunities of the past two years to apply his incisive wit to Barack Obama, and they have been ample. Don’t look for any edgy scrutiny when he has him face to face.