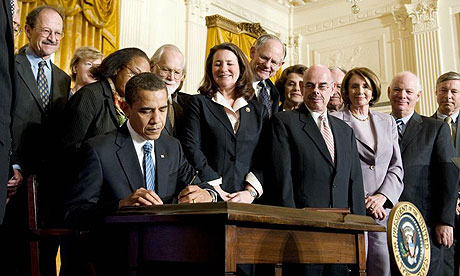 Embryonic stem cell research, to be clear. It would be technically true to tag that photo ‘Writing off human lives.’ Sound harsh? Behind the smiles, it is.

Established federal law acknowledges that research on embryos destroys human life, and therefore prohibits federal funding of embryonic stem cell research. The Obama administration tried to get around that but a federal judge put a halt to that end run in August, banning taxpayer dollars for embryo destruction. Obama’s Justice department hurried into court to stay the ban while they continued to fight in court for the right to fund controversial research. This week, while we were absorbed in other news stories, a judge granted that stay.

“The purpose of this administrative stay is to give the court sufficient opportunity to consider the merits of the emergency motion for stay and should not be construed in any way as a ruling on the merits of that motion,” the appeals court wrote in its one-page decision.

That’s bogus. Of course embryonic research violates the ban. This is politics over reason. When you follow it closely, it seems at times unreal.

But it’s also confusing, and a lot of people are capitalizing on that confusion.

The Alliance Defense Fund, co-counsel in this suit, helps us follow the straight line narrative. Starting with the August ruling, revealing what the Obama administration was trying to do in the first place:

The U.S. District Court for the District of Columbia found last month that the policy President Obama attempted to institute through an executive order in March 2009–which rescinded former President George W. Bush’s executive order limiting federal funding of embryonic stem cell research–is likely in violation of the Dickey/Wicker Amendment, a federal law prohibiting the federal funding of research involving the destruction of human embryos. The district court issued a preliminary injunction that immediately halted funding.

Which the Obama attorneys immediately challenged. With the help of some very complicit media, they wailed about the dire consequences if federal funding of embryo research is banned. Which defies both science and logic, besides the ethics behind the federal ban in the first place.

Early in the week, they were turned down…

Tuesday the district court denied a request for a stay of the injunction, saying, “Defendants are incorrect about much of their ‘parade of horribles’ that will supposedly result from this Court’s preliminary injunction…

Well put, judges. That’s precisely what the media and the Obama team trotted out. Good for these judges to not grant a stay of the ban.

“In this Court’s view, a stay would flout the will of Congress, as this Court understands what Congress has enacted in the Dickey-Wicker Amendment…. Congress has mandated that the public interest is served by preventing taxpayer funding of research that entails the destruction of human embryos. It is well-established that ‘[i]t is in the public interest for courts to carry out the will of Congress and for an agency to implement properly the statute it administers.’”

Or so we thought. But it depends on which courts and judges get the appeal.

Meanwhile, it’s our duty, as the republic represented by elected officials making these decisions, to be informed. And when it comes to issues like stem cells, who but the scientific community and their investors (financial and political) is paying attention?

I saw an interview this week on television with Dr. Kenneth Moy of the JPII Stem Cell Research Institute, who made it all sound so clear. The moral obstacles of embryonic stem cell research are already clear to many people, including members of government who crafted and approved the Dickey-Wicker amendment.

But aside from the morality of such research, there’s the complete lack of its success in creating cures, and the significant danger that embryonic stem cell treatments may cause tumors.

It is fair to say that there’s no way to judge whether embryonic stem cell researchers will solve the fundamental scientific obstacle of genetic stability and tumor formation. However, there is general agreement that this problem will need to be resolved before the FDA approves clinical trials, and it may take years to decades to resolve if even possible.

That won’t stop embryonic researchers and their financial, political and media enablers from keeping it alive in the courts. The real parade of horribles is the incalculable numbers of human lives that will end in the process.