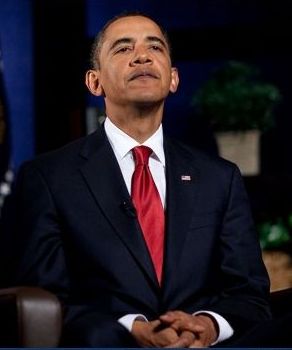 Stunning, says a Telegraph correspondent, in its speed and breadth and depth. And he’s saying a whole lot more about the reasons why, spelling them out with clarity that’s evaded the American press.

Meltdown, is what Nile Gardiner calls it, a “spectacular political collapse.”

There are an array of reasons behind the stunning decline and political fall of President Obama, chief among them fears over the current state of the US economy, with widespread concern over high levels of unemployment, the unstable housing market, and above all the towering budget deficit. Americans are increasingly rejecting President Obama’s big government solutions to America’s economic woes, which many fear will lead to the United States sharing the same fate as Greece.

Growing disillusionment with the Obama administration’s handling of the economy as well as health care and immigration has gone hand in hand with mounting unhappiness with the President’s aloof and imperial style of leadership, and a growing perception that he is out of touch with ordinary Americans, especially at a time of significant economic pain. Barack Obama’s striking absence of natural leadership ability (and blatant lack of experience) has played a big part in undermining his credibility with the US public, with his lacklustre handling of the Gulf oil spill coming under particularly intense fire.

On the national security and foreign policy front, President Obama has not fared any better. His leadership on the war in Afghanistan has been confused and at times lacking in conviction, and seemingly dictated by domestic political priorities rather than military and strategic goals. His overall foreign policy has been an appalling mess, with his flawed strategy of engagement of hostile regimes spectacularly backfiring. And as for the War on Terror, his administration has not even acknowledged it is fighting one.

Can it get any worse for President Obama? Undoubtedly yes.

This is not surprising to those who worried about the inexperience, radical associations and ideology of the candidate who mesmerized others into not caring about what lay beneath the surface. It’s those others who are now surprised and disappointed.

Read Gardiner’s elaboration of the 10 key reasons why the Obama presidency is in trouble, any one of which is serious in itself. And though there are some murmurings about America’s greatest days being behind us, don’t underestimate the importance and gravity of number 10.