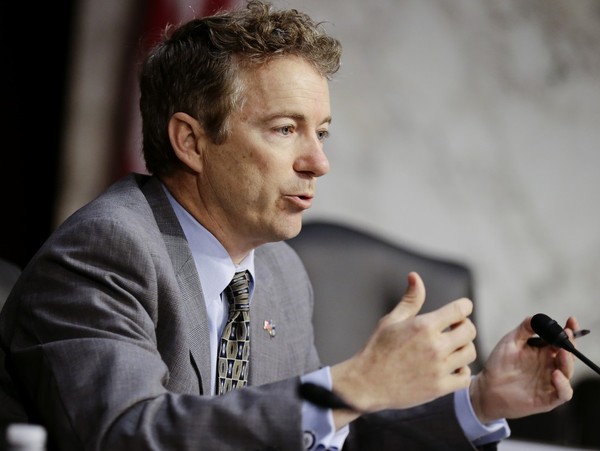 This president and his administration are not used to pushback, and haven’t had to answer to much of it anyway, thanks to a largely complicit media and a discombobulated Congress mostly unable to directly engage him. And then came Rand Paul.

He played a key role in the Benghazi investigation on the panel Hillary Clinton faced and mostly dominated, though Paul stood his ground demanding answers the administration continues to withhold. Now the revelation of Obama’s drone attack powers has Paul mounting a crusade to expose what other politicians and the media just won’t. It’s a good thing someone is willing to show what ‘the power of one’ can be, when one refuses to give up or give in or be silenced, unless by necessity.

The story started to bubble up early this week, though most big media failed to report it.

But Holder, writing to Republican Sen. Rand Paul of Kentucky, underlined that Obama “has no intention” of targeting his fellow citizens with unmanned aerial vehicles and would do so only if facing “an extraordinary circumstance.”

That is far too non-committal and elastic, especially for an administration that says one thing and does another (see background on the president’s Notre Dame speech, HHS mandate, National Prayer Breakfast talk, HHS mandate…)

Paul had asked the Obama administration on Feb. 20 whether the president “has the power to authorize lethal force, such as a drone strike, against a U.S. citizen on U.S. soil and without trial.” On Tuesday, he denounced Holder’s response as “frightening” and “an affront to the Constitutional due process rights of all Americans.”

“The U.S. government has not carried out drone strikes in the United States and has no intention of doing so,” Holder assured Paul in the March 4, 2013 letter. The attorney general also underlined that “we reject the use of military force where well-established law enforcement authorities in this country provide the best means for incapacitating a terrorist threat.”

Holder added: “The question you have posed is therefore entirely hypothetical, unlikely to occur, and one we hope no President will ever have to confront.”

That is not at all conclusive, accountable or even reassuring.

But “it is possible, I suppose to imagine an extraordinary circumstance in which it would be necessary and appropriate under the Constitution and applicable laws of the United States for the President to authorize the military to use lethal force within the territory of the United States,” Holder said.

And that was revealing.

“The U.S. Attorney General’s refusal to rule out the possibility of drone strikes on American citizens and on American soil is more than frightening—it is an affront the Constitutional due process rights of all Americans,” the senator said in a statement.

The exchange came as the White House agreed to give Senate Intelligence Committee members access to all of the Justice Department’s Office of Legal Counsel opinions justifying Obama’s expanded campaign of targeted assassination of suspected terrorists overseas, including American citizens. Some lawmakers had warned they would try to block top Obama counterterrorism adviser John Brennan’s nomination to head the CIA unless they were able to see the memos.

And that proceeded to happen on Wednesday morning, for as long as Sen. Rand Paul and co. could keep it going. Which extended to the very last hour of the day Wednesday night. Their cause was larger than one confirmation hearing, which they knew ultimately they could not stop.

Forcing the question of civil liberties and U.S. drone policy into the spotlight, what began as a one-man stand increasingly gained steam – and supporters – both in the Senate chamber and in social media throughout the day.

The senator was joined on the floor throughout the day and night by other lawmakers, who stepped in to help continue the filibuster by asking lengthy questions on the Senate floor. His colleagues’ contributions also included statements of support, the reading of tweets supporting Paul’s efforts and the quoting of rap lyrics, Shakespearean prose and classic Hollywood films.

In a sign that Paul’s cause had moved beyond just the most conservative wing of the party, Senate Minority Leader Mitch McConnell – Paul’s fellow Kentuckian who is facing re-election in 2014 – joined in close to midnight to offer support for Paul’s “tenacity and conviction” and to announce that he will oppose CIA nominee John Brennan’s confirmation.

This filibuster grew through social networking media into a new cause and movement. Because dispirited people will only remain silent until someone reminds them they have a voice, and not only deserve but need to speak.