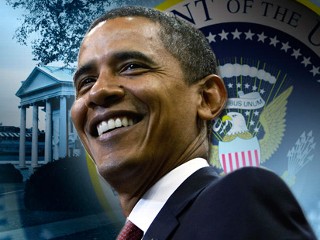 The President-elect is getting congratulatory letters from all over
the world. He noticed that Iranian president Ahmadinejad sent one of
them, and he’ll put off attending to that one.

But he should take this letter from John Allen.

This letter is a plea to make U.S.-Vatican relations under your
administration a priority, because of the enormous good in the world
that could be accomplished by exploiting natural areas of common
concern.

This isn’t just a nicety from a Catholic journalist. Allen lists
plenty of good reasons here why Obama would want to foster a good
relationship with the pope and the Vatican. (And by the way, it was no
small number of bishops who wrote statements and letters before the
election clarifying Church teaching on life, which countered Obama’s
stated position.)

Just to get this out of the way up front…

It’s also clear to everyone that, barring a dramatic
change of heart on your part, the White House and the Vatican will have
deep differences during your term over “life issues” such as abortion
and embryonic stem cell research.

However, Allen urges Obama not to allow that to “obscure four basic political realities”:

First, the Vatican and the United States need each
other, whatever their differences may be in a given historical moment.
What the United States is in the realm of “hard power,” meaning
coercive military and economic might, the Vatican is in terms of “soft
power,” meaning the capacity to stir action on the basis of ideas.
Religion is a powerful motivating force in human affairs, and the pope
has the biggest bully pulpit of any religious leader. It’s simply bad
for everyone if these two forces are not on good speaking terms.

Second, it’s smart politics for you not to neglect the Vatican.

After all, look at how vigorously candidates seek ‘the Catholic vote’ in every election.

Third, the Vatican has a centuries-old diplomatic
tradition of dealing with governments that, in one way or another,
don’t follow the church’s line on certain matters. Despite those
disagreements, Vatican diplomacy typically strives to keep lines of
communication open and to seek common ground…

Fourth, the Vatican is eager for good relations with the United
States in particular, regardless of which party happens to be in power.
The Vatican deeply admires the robust religiosity of America, in
contrast with the pervasive secularism of much of Europe. The Vatican
also believes that the United States is its most natural ally in
promoting religious freedom and human dignity around the world.

That cannot be denied and should not be dismissed.

And then there’s this intriguing message, which ought to capture Obama’s attention:

You are a hero to much of Africa, giving you a degree of
political capital on the continent that no other Western leader could
rival. At the same time, 2009 is shaping up as a “Year of Africa” in
global Catholicism. Over the next 12 months, Pope Benedict XVI will
visit Cameroon and Angola; the African bishops will hold their plenary
assembly in Rome; and bishops from all over the world will converge on
Rome for a “Synod for Africa.” All this suggests the possibility of
synergy between the world’s most important political and spiritual
leaders — i.e., you and the pope — to promote peace and development for
Africa, where the world’s most impoverished and abandoned people are
today found.

Read Allen’s whole letter, and hope that President-elect Obama does, too.