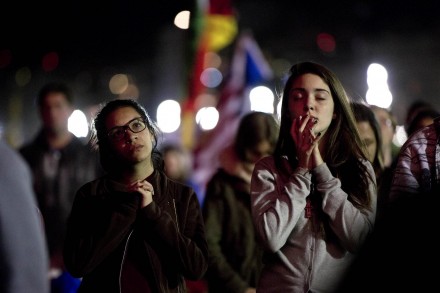 Why did this president decide this is the time for US intervention in Syria?

There has been no clarity, no consistency and practically no plan in his remarks, so people are having a hard time taking him seriously. Charles Krauthammer captures the essence of the moment here.

Senator Bob Corker: “What is it you’re seeking?”

General Martin Dempsey, chairman of the Joint Chiefs of Staff: “I can’t answer that, what we’re seeking.”

— Senate hearing on the use of force in Syria, September 3

We have a problem. The president proposes attacking Syria, and his top military officer cannot tell you the objective. Does the commander-in-chief know his own objective? Why, yes. “A shot across the bow,” explained Barack Obama.

Now, a shot across the bow is a warning. Its purpose is to say: Cease and desist, or the next shot will sink you. But Obama has already told the world — and Bashar Assad in particular — that there will be no next shot. He has insisted time and again that the operation will be finite and highly limited. Take the shot, kill some fish, go home.

What then is the purpose? Dempsey hasn’t a clue, but Secretary of State John Kerry says it will uphold and proclaim a norm and thus deter future use of chemical weapons. With a few Tomahawk missiles? Hitting sites that, thanks to the administration having leaked the target list, have already been scrubbed of important military assets?

This is risible. If anything, a pinprick from which Assad emerges unscathed would simply enhance his stature and vindicate his conduct. Deterrence depends entirely on perception and the perception in the Middle East is universal: Obama wants no part of Syria.

Assad has to go, says Obama, and then lifts not a finger for two years. Obama lays down a red line, and then ignores it. Shamed finally by a massive poison-gas attack, he sends Kerry to make an impassioned case for righteous and urgent retaliation — and the very next day, Obama undermines everything by declaring an indefinite timeout to seek congressional approval.

This stunning zigzag, following months of hesitation, ambivalence, contradiction, and studied delay, left our regional allies shocked and our enemies gleeful. I had strongly advocated going to Congress. But it was inconceivable that, instead of recalling Congress to emergency session, Obama would simply place everything in suspension while Congress finished its Labor Day barbecues and he flew off to Stockholm and St. Petersburg…

And yet here is Obama, having done nothing yet but hesitate, threaten, retract, and wander about the stage, claiming Wednesday in Sweden to be the conscience of the world, upholding not his own red line but the world’s. And, incidentally, Congress’s — a transparent attempt at offloading responsibility.

This is deeply troubling for the administration’s mishandling and embarrassing show of irresponsibility, as Krauthammer points out.

Problem is, Obama promised U.S. weaponry three months ago and not a rifle has arrived. This time around, what seems in the making is a mere pinprick, designed to be, one U.S. official told the Los Angeles Times, “just muscular enough not to get mocked.”

That’s why Dempsey is so glum. That’s why U.S. allies are so stunned. There’s no strategy, no purpose here other than helping Obama escape self-inflicted humiliation.

This is deeply unserious. Unless Obama can show the country that his don’t-mock-me airstrike is, in fact, part of a serious strategy for altering the trajectory of the Syrian war, Congress should vote no.

That reference to the red line that Obama declared, then denied that he declared, is the public dissembling of a president who’s in over his head and may or may not realize that the shell game he’s so good at isn’t working this time.

Fittingly, Obama used a joint press conference in Stockholm with the Swedish Prime Minister to massage his own role in the diplomatic debacle over Syria in which Obama now finds himself. Obama insisted that he didn’t set a “red line” for action over the use of chemical weapons, but that Congress did … and so did everyone else, except Obama, of course:

“My credibility is not on the line — the international community’s credibility is on the line,” President Barack Obama said Wednesday in Sweden regarding his desire for a military strike in response to a suspected August chemical attack in Syria. He said the question is, after going through all the evidence: “Are we going to try to find a reason not to act? And if that’s the case, then I think the (world) community should admit it.”

It’s not surprising that he can’t get a big portion of his own party or base to support him, finally. Nancy Pelosi says she doesn’t know if the president can get a majority of House Democrats to back an attack on Syria.

Remember, if you believe what Pelosi said yesterday, she’s not whipping House Democrats on this. There is, in theory, no pressure from the Democratic leadership in Congress to take one for the team here. Endgame for intervention?

Can you get a majority of your caucus? Is that important?

I don’t know. I think it would be important to get a majority in the Congress. But I don’t know if it’s important how you would break it down. These issues are not really partisan…

What was your reaction to the decision to bring this to Congress?

I was encouraging consultation. I did not believe that the President needs to get authorization from Congress. I think that it is great that he asked for it. I think that it strengthens his hand, and our country’s hand, and our moral standing to Bashar Assad to have Congress support it. But it’s a challenge for the reasons you mentioned. It’s a challenge because the country is weary of war.

I was driving and listening to satellite radio in the car, switching stations at times to stay on coverage of the Syria debate. I came upon a panel discussion on CNN in time to hear former Clinton administration staffer and Democratic strategist Paul Begala say, repeatedly, that American are “war weary” and that’s the main reason for lack of support on this one. He went on to say it will take at least the next 50 years or so before we begin to get over “the debacle in Iraq”, and then repeated that we’re just “war weary.”

Yes, we are. But I’m always leery of buzzwords or phrases that turn up over and over in different news sites, used by different mouthpieces for any administration of either party at any time. This one has been particularly heavy-handed with talking points with a very complicit media, hence the obvious nature of the political meme of the moment.

So why would something that seems to suggest the president is on the wrong track continue to be repeated by his backers? To give him cover. Because Americans really are war weary, and so are the smart members of Congress in both parties, enough to ask the right questions and study the ramifications of their vote.

Alas, the president seems to be floundering.

The Obama administration has stumbled from one credibility crisis to the next on Syria, and now wants Congress to rescue Barack Obama from himself. Obama declares that the stated policy of the United States toward Syria is regime change, then dithers on how to effect it. Obama draws a red line, and then does nothing at all to prepare for the possibility that Bashar al-Assad might call his bluff

This credibility crisis goes beyond Syria, however, and extends to the whole Arab Spring, for which Obama seemed all too pleased to take credit not terribly long ago. He demanded Hosni Mubarak’s ouster and quick elections in Egypt, which turned a stable American ally into a barely-contained disaster, and then has vacillated ever since on how to handle the crisis. Obama then led a NATO intervention in Libya while claiming not to want regime change, but ended up decapitating the Qaddafi regime anyway. That replaced a brutal dictatorship that was still cooperating with the West on counter-terrorism into a failed state that has allowed for a rapid expansion of radical Islamist terror networks through the whole region.

Now Obama wants to apply the Libya model to Syria, but cannot articulate a single American interest in launching a war.

Which gets to the heart of it all. After Paul Begala made those remarks about Americans being ‘war weary’, he and other panelists engaged in the political calculations of what a strike on Syria would cost or gain the president, his administration and his party’s future in the next elections. That bugs me a lot, how moral decisions turn into political calculations, and have for so many years. This USA Today article illustrates that clearly. So does this New York Times article.

Chicago’s Cardinal Francis George was on my radio show this week and I brought that up to him. He agreed, but said we shouldn’t be surprised, because everything has turned into a political calculation these days, frankly. He addressed the different angles on the Syrian debate and said it doesn’t measure up to the ‘just war’ criteria Christians apply to such interventions.

Pope Francis has called for intervention over Syria, too. And his is a plan that should unify the world.

With all my strength, I ask each party in this conflict to listen to the voice of their own conscience, not to close themselves in solely on their own interests, but rather to look at each other as brothers and decisively and courageously to follow the path of encounter and negotiation, and so overcome blind conflict. With similar vigour I exhort the international community to make every effort to promote clear proposals for peace in that country without further delay, a peace based on dialogue and negotiation, for the good of the entire Syrian people…

All men and women of good will are bound by the task of pursuing peace. I make a forceful and urgent call to the entire Catholic Church, and also to every Christian of other confessions, as well as to followers of every religion and to those brothers and sisters who do not believe: peace is a good which overcomes every barrier, because it belongs all of humanity!

May the plea for peace rise up and touch the heart of everyone so that they may lay down their weapons and be let themselves be led by the desire for peace.

To this end, brothers and sisters, I have decided to proclaim for the whole Church on 7 September next, the vigil of the birth of Mary, Queen of Peace, a day of fasting and prayer for peace in Syria, the Middle East, and throughout the world, and I also invite each person, including our fellow Christians, followers of other religions and all men of good will, to participate, in whatever way they can, in this initiative.

On 7 September, in Saint Peter’s Square, here, from 19:00 until 24:00, we will gather in prayer and in a spirit of penance, invoking God’s great gift of peace upon the beloved nation of Syria and upon each situation of conflict and violence around the world. Humanity needs to see these gestures of peace and to hear words of hope and peace! I ask all the local churches, in addition to fasting, that they gather to pray for this intention.

This is the Syrian we, and they, need most.