Last weekend I made a quick trip to New York City, while there I was lucky enough to see the new memorial fountains at the World Trade Center location. It was a moving experience, watching New Yorkers cry by the named of a deceased loved one and to see building equipment surrounding the site as a testament to the resilient American spirit. After seeing this memorial site I happened to pass by the Occupy Wall Street protestors and was immediately accosted – quiet the difference between the two locations a mere blocks apart.

While walking by and looking into the crowd of what appeared to be mostly homeless people and hippies, a middle aged man with dread locks half way down his back looked me dead in the eye and shouted, “Don’t just walk by. Occupy.” I jumped at the statement but kept walking. To my retreating back he yelled, “If you keep walking you’re part of the 99. We are the 1 percent.”

That brief encounter jarred me and forced me to do more research into the movement. I had already read a number of newspaper articles chronicling the month-long demonstration that is now spreading around the country and around the globe. So where did I turn? Where I always turn for information – the internet. I googled ‘Occupy Wall St.’ and came across Twitter hashtags, Facebook groups, a Wikipedia entry and the official Occupy Wall St. website. And that’s when I started to get confused.

There seems to be no one driving desire of this group – other than to change the status quo. Change is good, but shouldn’t we have an idea of what we want to change in order for our voice to be heard and actually respected? I’m all about the desire for authentic democracy. But, they seem to be altering their thoughts on what that is.  The list of demands varies each time you check the site. The first time I read the demands it listed several dozen ideas. Now there are eight demands. You can read them here – although the list is constantly being changed and tweaked. (pic from money.cnn.com) 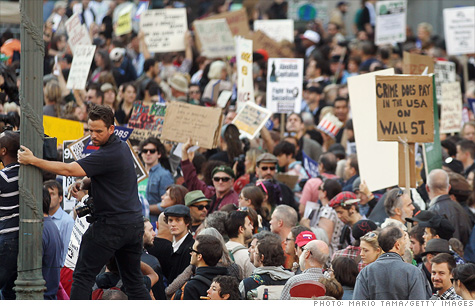 The other confusing thing to me is the inconsistent message. The Occupy Wall Street crowd claims to be against big business of all sorts. They want all the big corporations to be shut down by a boycott of members. But then you walk by the site and see people on their iPhone or drink cans of Coke. Last time I checked Apple and Coca-Cola were BIG business.

Or what about the way their message is disseminated? Sure the crowd gains supporters thanks to people who walk by and are pulled in my the ‘don’t just walk by. Occupy’ command. But mostly people have found out about the protests thanks to major communication outlets and social media sites, especially Facebook. With a potential $100 billion IPO in the wings for Facebook I’d say that is serious big business.

Even a simple Twitter search comes up with a dozen of hashtags for the movement, #occupywallst, #ows, #occupylsx, #occupyrome, #occupytokyo – just to name a few.

So my question is… what do the Occupy Wall Street people really think they will accomplish with this? I applaud their rally for change, even if I don’t agree with all their demands, but I wish they had more of a plan for what will happen next.

And I wish they could up with a more constructive way to get their point across. Taking over a local square and camping out for days, without a care for the incoming bills, personal responsibilities and professional prestige is not only irresponsible but a sure way to be looked down upon by others who are working hard to make something of themselves.

Check out this interactive map of all the Occupy movements.