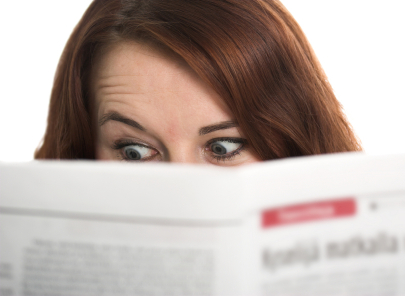 This post may provide a sort of commentary on the previous one about 20-somethings. German researchers have found that, given a choice, older people prefer to read bad news rather than good news about young adults.

In fact, reading about youths getting drunk and brawling in the streets is likely to give a small boost to their elders’ self esteem. As for young people, they just prefer not to read about the oldies at all.

The point of the study was to test the theory that people use the media to enhance their social identity, said lead author Silvia Knobloch-Westerwick of Ohio State University.

An earlier study using the same data had confirmed that people prefer media messages that portray people like themselves, but it also produced the unexpected result that older people (aged 50 to 65) seemed equally interested in stories about younger people.

“Now we know why older people liked reading about the younger people – they were looking for negative stories about them,” said Knobloch-Westerwick.

Oh, really? Might they not just have been concerned about their children and grandchildren and the dangers they face today?

Well, not entirely. There’s that bothersome boost in self esteem to contend with:

Results showed that younger people showed no differences in self-esteem based on what they had read. However, the more that older people read negative stories about younger individuals, the higher the older people’s levels of self-esteem tended to be.

Maybe this is the baby boomers’ defence mechanism against a youth-centred culture, as the researcher suggests. If so, it is not well founded. Surely the older generation should be feeling worse after reading about the trouble the kids they have raised are getting into.

Who created the youth-centred culture? Who funded it? Who tolerated its excesses for so long?