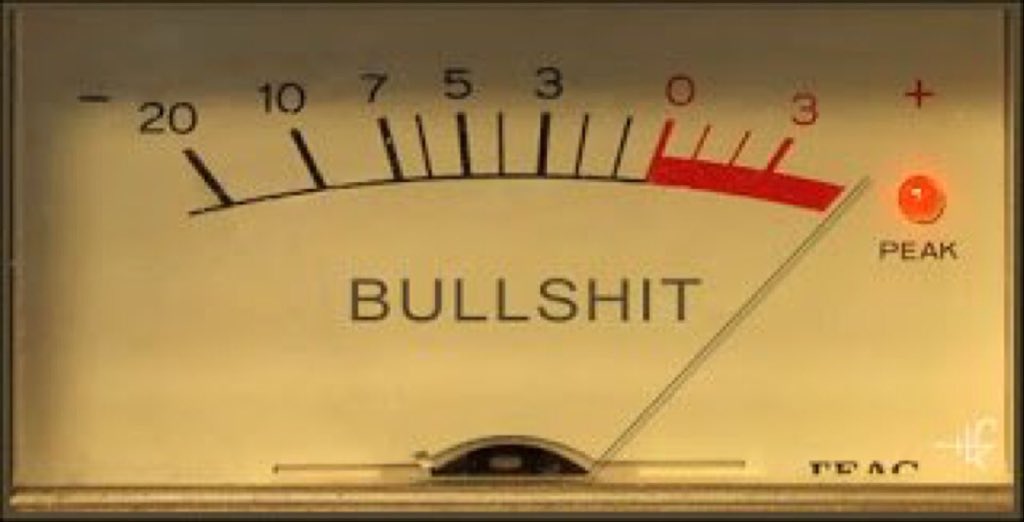 It’s rare to find a book of philosophy which is so relevant to the debates of the day that it could have appeared on an op-ed page.

But such is On Bullshit, by an emeritus professor at Princeton University, Harry Frankfurt. It first appeared in an academic journal in 1986 and 20 years later a savvy publisher released it as a tiny hardcover. Amazingly, it stayed on the New York Times bestseller list for 27 weeks. A bemused Frankfurt even appeared on Comedy Central with Jon Stewart.

Don’t be put off by the vulgarity of the title (the offending word was beeped out on Comedy Central about 37 times); this is a profoundly serious book about the most discussed issue of the last six months – the post-truth society and fake news.

The book opens with a startling assertion: “One of the most salient features of our culture is that there is so much bullshit. Everyone knows this. Each of us contributes his share. But we tend to take the situation for granted.”

How true that is. We just sit there and let it plop into our daily routine. But not Frankfurt. He constructs a theory of bullshit, no easy task, as no one had ever studied the phenomenon closely before. Its closest synonym might be the term “hot air”:

When we characterize talk as hot air, we mean that what comes out of the speaker’s mouth is only that. It is mere vapor. His speech is empty, without substance or content. His use of language, accordingly, does not contribute to the purpose it purports to serve. No more information is communicated than if the speaker had merely exhaled. There are similarities between hot air and excrement, incidentally, which make hot air seem an especially suitable equivalent for bullshit. Just as hot air is speech that has been emptied of all informative content, so excrement is matter from which everything nutritive has been removed.

Are bullshitters liars? This question leads to the heart of Frankfurt’s analysis. In his opinion, lying is a more moral activity than bullshitting. Why? Because words are meant to lead us to the truth, to how things really are. This is the point of philosophy, just as it is of life itself. The liar tries to divert us from the truth, precisely because he knows how important the truth is. Oscar Wilde said that hypocrisy is the tribute that vice pays to virtue; in the same way, a lie is the tribute the liar pays to truth. “Both in lying and in telling the truth people are guided by their beliefs concerning the way things are,” observes Frankfurt.

However, the person who is full of bullshit is worse than a liar. He “does not reject the authority of the truth, as the liar does, and oppose himself to it. He pays no attention to it at all.” And it is for this reason that Frankfurt condemns him: “By virtue of this, bullshit is a greater enemy of the truth than lies are.”

Frankfurt is scathing in his analysis:

[The bullshitter’] eye is not on the facts at all, as the eyes of the honest man and of the liar are, except insofar as they may be pertinent to his interest in getting away with what he says. He does not care whether the things he says describe reality correctly. He just picks them out, or makes them up, to suit his purpose.

Let’s cut to the chase here. Did Professor Frankfurt have Donald Trump in mind when he wrote this? It’s not likely. On Bullshit was written in 1986, and Donald Trump’s first book, The Art of the Deal, was published in 1987. But it describes the Trump phenomenon better than the constant complaint by journalists that he tells one porkie after another. They’re not lies; they are just bullshit – vaporous words which have no necessary relation to reality.

Let’s return to Frankfurt’s pre-Trump analysis: why is there so much bullshit? On this he is far more tentative than he is on defining it.

One reason could be that people in public life are called upon “speak extensively about matters of which they are so some extent ignorant”. Some people also believe that citizens in a democratic society are required to have opinions about everything.

More important, though, is widespread scepticism about the very existence of truth, Frankfurt says. If we cannot describe things as they are, what alternative can there be for an ambitious person but bullshit? As Trump wrote in The Art of the Deal:

The final key to the way I promote is bravado. I play to people’s fantasies. People may not always think big themselves, but they can still get very excited by those who do. That’s why a little hyperbole never hurts. People want to believe that something is the biggest and the greatest and the most spectacular. I call it truthful hyperbole.

Thirty years on, a technique of “truthful hyperbole” seems to have evolved into a habit of bullshit.

Although his argument draws to a close at this point, Frankfurt has surely put his finger onto something. For a generation or more, scepticism has been a key strand in university education. Students have been taught that we cannot know the truth of things, that there are no immutable truths, that my views are as good as your views, that there are no facts, only opinions. When the students graduated, they spread this toxic notion throughout the media and Hollywood, and from there it has seeped into public life.

So, to some extent, the Trump phenomenon is a metastasis of a philosophical cancer. When professors lose the habit of truth, politicians acquire the art of bullshit.