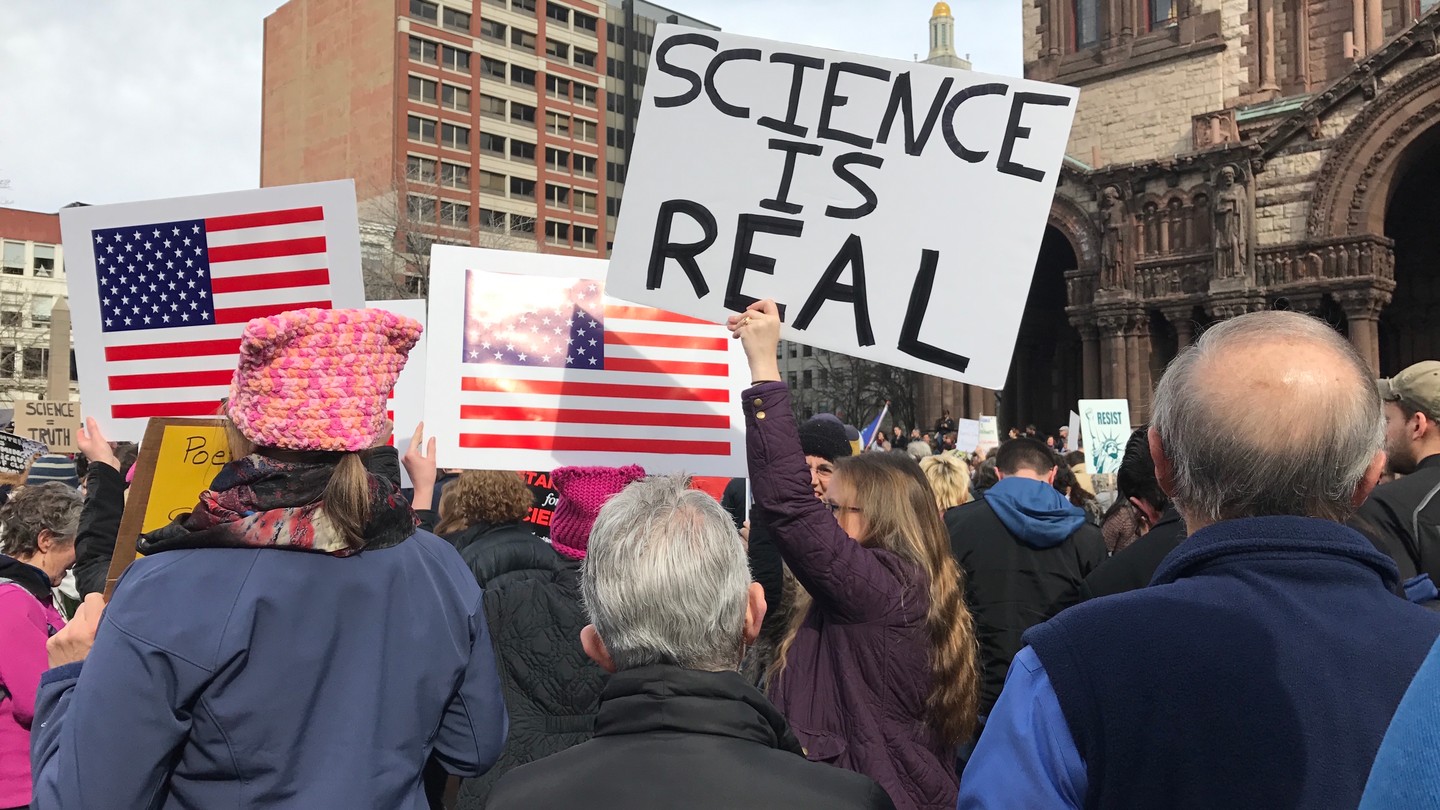 This week hundreds of scientists rallied in Boston’s Copley Square to protest against the anti-science forces which have allegedly captured Washington. Nearby, at the annual meeting of the American Association for the Advancement of Science, a talk titled “Defending Science and Scientific Integrity in the Age of Trump” attracted so many listeners that it had to be live-streamed into a spill-over room.

Although the organisers of the rally downplayed criticism of the President, stressed that reason and science were under threat. “It feels like there’s been a breakdown of trust between science and the public, and so it’s time for scientists to step up and start communicating directly to the public,” an MIT post-graduate student said.

That the Trump Administration is full of climate change sceptics is what most scientists had in mind at the AAAS meeting.

But is that the only explanation of the breakdown in trust?

The title of this document is “Human Genome Editing: Science, Ethics, and Governance”. The central question it poses is whether eugenics is safe and ethical. Its answer is that eugenics would be ethical if it were safe.

This is oversimplifying the tentative prose of this dense 300-page page report, of course, but not greatly.

It is true that there is an urgency to these questions. A technique has been found which can modify the human genome quickly and efficiently. Called CRISPR/Cas9, it allows scientists to snip strands of DNA, removing some genes and inserting others. The opportunities and the dangers are immense.

If this is confined to non-reproductive cells, it can be used to develop therapies and cure diseases. Curing ailments in utero is particularly promising.

But it will also be possible to modify the human germline cells, of the eggs and sperm or the resulting embryo so that genetic changes can be passed onto future generations. If this happens, society could be relieved from the burden of genetic diseases; parents will be able to design their offspring; and the dreams of transhumanists will start to unfold.

In plain language, this is called eugenics.

As the authors of the report acknowledge, it may be difficult to stop the advance of do-it-yourself eugenics in the United States.

“Access to germline genome editing would be consistent with the broadest legal and cultural interpretations of parental autonomy rights in the United States… Precluding access to this technology could be regarded as limiting parental autonomy, depending upon the country and the culture. Indeed, some people feel they have a religious or historical mandate to have genetically related children.”

As The Economist pointed out approvingly in this week’s cover story, as long as the parents are happy and the children are healthy, what could possibly be the problem with these eugenic techniques? “One advantage of this approach,” it claims,“ is that gay couples could have children related to both parents” because it may be possible to create sperm from female skin cells and eggs from male skin cells.

The scientific establishment is rushing ahead as fast as it dares. “We’re very disappointed with the report,” commented Marcy Darnovsky, of the Center for Genetics and Society in California. ”It’s really a pretty dramatic shift from the existing and widespread agreement globally that human germline editing should be prohibited.”

In fact, it was only a bare 14 months ago that the National Academy of Science held an International Summit on Human Gene Editing which concluded that it would be “irresponsible to proceed with any clinical use of germline editing” until it was safe and “there is broad societal consensus”.

Even though neither of these two condition have been met, the latest report – which is bound to be very influential in shaping government policy — has recommended that “with stringent oversight, heritable germline editing clinical trials could one day be permitted for serious conditions”.

Although the report’s language may sound very cautious, its ethics are clear, if impoverished and pragmatic. There is nothing intrinsically wrong with eugenics, provided that it is safe and legal.

A significant obstacle to these scientists’ ambitions is the “yuck factor”. Most Americans would probably oppose proposals to legalise eugenics. They instinctively feel that enhancing homo sapiens belongs in science fiction, not in the marketplace.

To overcome this resistance, the report suggests that the government needs to launch a public engagement program to overcome the misgivings of the public.

Efforts to advance human medicine through genome editing will be strengthened by public engagement informed by technical experts and by social scientists who undertake systematic public opinion research, develop appropriate communication materials, and minimize artificial biases or constraints that would hinder discussion and debate.

This sounds suspiciously like what used to be called propaganda: using all the resources of a well-funded government bureaucracy to convince a poorly-informed public and perplexed media how mistaken they were about the evils of eugenics. This is a model of massaging public opinion which was followed in the United Kingdom with great success to permit the creation of human-animal embryos and three-parent babies, even though they were vehemently opposed by supporters of human dignity.

It is projects like this expensive exercise in justifying eugenics which widen the gap between the science community and the public. They strengthen the view that scientists regard ethics merely as an obstacle to progress. And that’s not what most Americans believe.