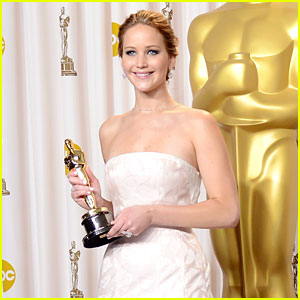 A young and new star stays true to herself and her values, and by that beautiful simplicty teaches the high and mighty a lesson. How sweet it is.

If you saw Hunger Games, you know Jennifer Lawrence and knew that she had a big future if she wanted to puruse it in film. She went on, and won an Oscar already. Not a surprise. Her post-award press conference was.

Actress Jennifer Lawrence, winner of the Oscar for Best Actress for her performance in Silver Linings Playbook, could teach the political class a thing or two – and not just about acting. Lawrence’s post-Academy Awards press conference was artful, funny, flippant and endearing – at least, it was for the viewers at home. For the press who she ruthlessly mocked and whose questions she reluctantly answered in a glib but charming fashion, Lawrence may not have been their favorite interview of the night.

When asked what the “process” was for preparing to come to the Oscars, Lawrence replied – with all the sincerity and lack of affectation that one would expect from anyone other than an Academy Award-winning actress – that she woke up, took a shower, tried on the dress and “came to the Oscars.” That last bit delivered with a bit of faux pomposity she knows the reporter was expecting…

Lawrence displayed humility and self-deprecation – it was disarming. Probably due mostly to that particular character trait’s conspicuous paucity in Hollywood, as well as Washington D.C.

Right. But so much moreso than they can comprehend.