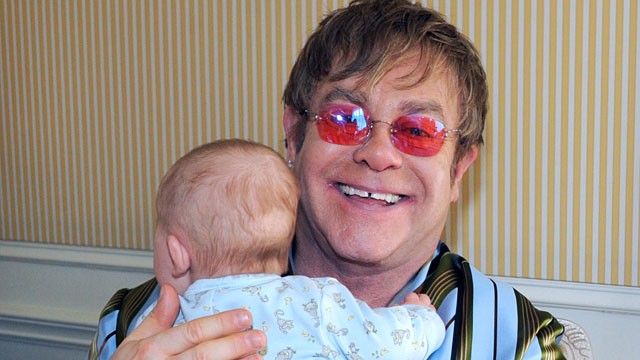 Someone once ascribed the implosion of moral standards in the West to the moment when we entrusted the entertainment industry with the task of arbitrating on those standards. It was difficult not to agree with that when one tried to unravel the logic of Elton John in his recent NBC Today pronouncements.

Elton now bemoans the sad reality that his and his “married” partner’s son – or whoever’s son he is – will grow up without any idea of who his (surrogate) mother is. Elton anticipates that it will be “heartbreaking” for the little fellow when he looks around at all his friends and finds that he has no mother to run to as they have. The singer does not tell us if his heart is broken as well at having inflicted this pain on little Zachary. But it must not be too painful for him because he is now toying with the idea of inflicting the same pain on another child by “acquiring” – for a very substantial sum of money again, one assumes – a companion for Zachary.

Try to work out a viable and rational social or moral framework for life out of all that muddle.

Elton and his partner David Furnish got ‘married’ in 2005. They tried to adopt a child but were refused. They then made “arrangements” for surrogacy and Zachary arrived in the world in 2010, was untimely taken from his mother’s arms and presented to the happy couple in a worldwide blaze of publicity. The entertainment industry looked on approvingly on the poster boys of their new morality.

Now John is showing a little bit of sense, makes one step forward by admitting to Matt Lauer on NBC, “It’s going to be heartbreaking for him to grow up and realise he hasn’t got a mummy”. But then he takes two steps backwards and says that he is so worried about when Zachary goes to preschool and other children ask him why he doesn’t have a mom, he and Furnish would like to have another child so Zachary doesn’t have go through it alone.

One wonders if the gay lobby is now going to turn on Elton for what they might consider a betrayal of the front they have erected around their world portraying their new “family” structure as normal and blissful. Will they suffer the fate of the 14-year-old girl who received death threats after she told Maryland Senate Judicial Proceedings Committee, “I really feel bad for the kids who have two parents of the same gender. Even though some kids think it’s fine, they have no idea what kind of wonderful experiences they miss out on.” She was asking the Committee to vote ‘no’ to a gay marriage proposal.

Don’t hold your breath for this one.