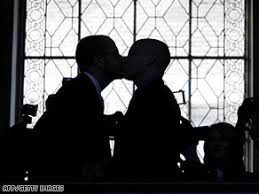 Of all the things that Tom and Tina Average might want for their marriage, one they have quite likely never thought of is innovation. It is the kind of word they might look for in the home improvement pages of the weekend paper or on their favourite consumer website, but not in a marriage guidance brochure.

Yet California author Joe Quirk, for one, believes that “traditional American marriage is in crisis” and a new look is what it needs. What does he have in mind? For a start, “insights” from married gay and lesbian couples. Interviewed by the New York Times, Quirk argues that, “If innovation in marriage is going to occur, it will be spearheaded by homosexual marriages.”

If you are you wondering what kind of brave new marriage that would be, two recent studies give us an inkling of what to expect.

The recently published Gay Couples Study conducted by Colleen Hoff at the Center for Research on Gender and Sexuality, San Francisco, looked at the relationships of 566 committed gay couples (males) over a three-year period. The study showed that 47 per cent of gay couples had “sex agreements” that specifically allowed sexual activity with others. An additional 8 per cent of couples were split: one person favored sex outside the relationship and the other expected monogamy. Only 45 per cent described their relationships as monogamous.

Proponents of “marriage equality” sing their refrain over and over: “Our relationships are just the same as yours.”

Not even close. While just 7 per cent of Americans believe that adultery (sexual infidelity by married, heterosexual partners) is morally acceptable, Dr Hoff’s report emphasizes that nearly 50 per cent of gays in committed relationships specifically affirm sexual infidelity. Other research shows shockingly higher rates (75-95 per cent) of non-monogamy in long-term gay relationships.

(Note that we are talking about male homosexual relationships here. Research on lesbian couples is sparse but one study finds that 20 per cent of lesbians pursue open relationships.)

But what of the roughly 45 per cent of gay relationships that, according to the study, do claim monogamy? Their relationships should yield insights applicable to traditional opposite-sex marriages, right?

Not likely. Any apparent similarity between gay relationships and heterosexual couples disappears once it becomes clear what “monogamy” means in the gay paradigm. A 2010 study from England entitled, “Gay Monogamy: I Love You But I Can’t Have Sex With Only You”, found that none of the gay couples in the study defined monogamy as sexual exclusivity. In fact, they all engaged in sex with outside partners, even though they professed to be in a monogamous relationship.

The Center for Research on Gender and Sexuality, in its spring 2010 newsletter, summarized the English study, explaining that sex with outside partners is the “monogamous” norm for gay couples.

“All participants perceived fidelity as emotional monogamy. Thus, forming an emotional bond with an outside partner constituted cheating.” Sexual encounters with others didn’t count as “cheating” as long as it was “compartmentaliz[ed], which they defined as the process of separating sex from emotion and was key to most participants’ ability to manage sex outside the relationship.”

Where does that leave us? Using the conservative figures from the Gay Couples Study, at least half of gay relationships don’t accept monogamy. But those that do, probably mean gay-style monogamy, which allows outside sex as long as it is “open” and any emotional attachment is to the committed partner.
The gay relationship model, then, allows each partner to pursue as much sex with as many people as desired, as long as the outside relationships are “safe,” emotionally detached, and transparent.

Think of the gay narrative, expressed in news stories, TV interviews, and court documents, that movingly tell of gay couples who have been “together” for 10, 15, 20 years and want to be married, just like straight couples. The heterosexual frame of reference assumes that, for gay couples, committed and long-term relationships embrace sexual exclusivity, the norm for opposite-sex couples. And surveys that show growing popular support for same-sex marriage rely on that same public misperception.

The truth is that the gay experience, dressed in the language of heterosexual normalcy, bears little resemblance to traditional marriage relationships.
For some researchers, that’s exactly the point. They believe that gay relationships herald a long-overdue deconstruction of the meaning of “marriage,” for gays and straights alike, away from the notion of sexual exclusivity and towards emotional bonding and “open” sexual coupling, or tripling, or whatever.

“It’s a redefinition of marriage” says Blake Spears, a researcher and partner in one such relationship, to mean “emotional commitment, the closeness.” As one gay man, Daemon from Phoenix, explains, “I am in an open relationship right now and it works fine… I personally do not associate sex with marriage; to me they are completely different acts. I would also love to get married from a legal perspective, regardless of who I have sex with.”

Will the gay norm of sexual “freedom” herald a more relaxed approach to heterosexual marriage, deemphasizing fidelity but encouraging couples to stay together longer? For Dr Hoff, the Gay Couples Study does just that, suggesting that open but non-monogamous relationships build trust and keep couples together, even when sexual interests wander.

Unfortunately, it is not hard to find relationship experts who agree with Dr. Hoff, inviting heterosexual couples to experience the pleasures of non-monogamy. A Psychology Today piece, for example,  counsels that, “gay couples can teach other couples about sexual monogamy,” which means to “engage in sexual encounters based on sexual attraction only and not emotions or affection. It is about sex and nothing more…any sexual inclusion is simply behavioral in nature, not relational.” Untangling the doublespeak, gay-style “monogamy” allows unrestricted sex outside the relationship, as long as it’s meaningless sex.

So what is the impact of this push to sell “open” marriage to straight couples — destroying fidelity and gutting sex of any deeper meaning — on the basis that it works for gays? I don’t expect we will see a throng of married couples rush out and change their day to-day sexual habits to emulate their gay friends. Unlike Daemon from Phoenix, most heterosexual couples expect marriage to include sexual commitment. They intuitively know that permitting extra-marital sex won’t build trust, but destroy it.

But marriage is in trouble, nonetheless. It is worrisome when ordinary married folks begin to hum the non-monogamy theme song, just like the secular psychologists, and clap along to the cultural beat of tolerance.

Consider this: CafeMom, one of the largest online communities for moms (reaching nearly 7 million moms a month), recently hosted a controversial discussion asking, “Is Polygamy Really Damaging to Society?” The conversation offered a snapshot (focus-group style) of the views of average American moms. Some women responded with good, ol’ common sense, arguing that society should not sanction polygamy or other non-monogamous relationships because they are “terrible for children” and would “rip families apart” because “jealousy is human nature”.

A surprising number, however, took the “personally opposed” point of view: they prefer sexual fidelity in their own marriages, but believe marriage laws and social mores should broaden to allow “consenting adults” the freedom to define their own sexual parameters within marriage. One mom pointed out, “I don’t think [polygamy] hurts society any more than homosexuals do,” because it’s private and “has no effect on anyone but those in that family.”

The social consensus that marriage is a life-long, sexually faithful union between a man and a woman is fast unraveling. Advocates for same-sex marriage have smoothly and successfully appropriated the language of traditional marriage in order to win the public’s sympathy and support. The confused public facilitates its own deception, however, by its unwillingness to embrace a sexual ethic—for gays and straights alike—that is grounded in the authentic dignity of human beings.

And the longer we avoid the “icky” discussions about just what gays do, with whom, and with how many, the more likely we are to see “marriage” in our lifetime that bears no resemblance to the real thing.

One CafeMom mother of two concluded that, “a large number of Americans could care less who you marry and how many you marry.”

The big question is: Is she right?

Mary Rice Hasson is a writer and attorney from the Washington, D.C. area. She blogs at wordsfromcana.wordpress.com