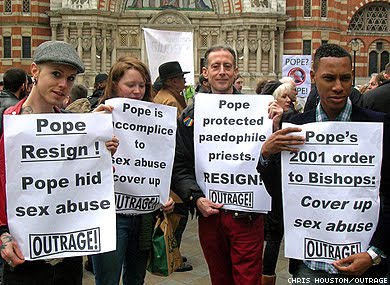 A high profile British homosexual activist wants the age of sexual consent lowered to 14. Peter Tatchell earlier called for Pope Benedict to be prosecuted for “covering up” clerical sexual abuse.

However, on the Big Think website recently Tatchell plugged for legalising younger sex in America on the basis that even now it “is
mostly consenting, safe and fun”.

He made his claims in one of a series of articles on “dangerous ideas”.

Dangerous, certainly, but also just a bit surprising in view of
this year’s paedophilia scandals and his campaign against Pope
Benedict’s visit to the UK.  “Benedict XVI put the interests and image of the church before the welfare of children and young people. He is unfit to remain as Pope,” trumpeted Tatchell back in March.

Now, by a tortured logic he claims that a lower age of consent is “the
best way” to protect young people from abuse. His arguments boil down to
three:

* The kids are doing it anyway.

* Young people under 16 have the right to decide when to have sex.

Actually, in making the last claim Tatchell puts no lower age limit.
This fits with his recipe for protecting kids from peer pressure and
paedophiles: “giving them frank, high quality sex and relationship
education from an early age”. As we have noted elsewhere on this site recently, for some people that means nursery school.

Primed with sexual information from the age of three and the idea that sex is a kind of “fun” they have a right to, how would today’s 14-year-olds (and, inevitably, those who can pass for 14) be better equipped to resist the advances of adult men than the young teens who fell under the power of paedophile priests 20 or 30 years ago?

In the end, Tatchell’s case seems to rest on a view of sex as the driving force
and highest achievement of human life — from “an early age”. It is a
view that some adults may find convenient but which common sense rejects
as contrary to the good of children and society. Thus the editors of
Big Think conclude:

Why We Should Reject This

Of course there will always be underage people who have sex, but that
doesn’t mean the law should condone it. Sex is a very complicated part
of human behavior that is too nuanced for young people to understand. In
fact, studies have shown that people, especially girls, who have sex at
a young age often regret it. One study in New Zealand found that 70% of
girls who had sex before the age of 16 wished they hadn’t done so. In a
column for Telegraph, writer David Lindsay argues, “sex is for people
who can cope with the consequences, physical and otherwise. In a word,
adults.”