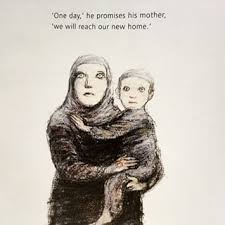 The Children’s Book Council of Australia has awarded the 2016 Picture Book of the Year to the book Flight. This is the most prestigious award given to children’s books in Australia. Being on the shortlist or winning it means that automatically copies of the book will be bought by almost every school and public library in Australia. Parents will excitedly see the sticker “Children’s Book Council of Australia Picture Book of the Year” and buy copies for their young children or relatives.

There is evidence from author interviews that Flight was inspired by the author’s disturbed past, particularly her own displacement from her family home when she was seven years of age.  There is nothing wrong with this as such, except that there is the possibility she has misinterpreted issues having to do with refugees and religion due to her emotional involvement in the story.

The story begins with a young family fleeing their war-torn homeland. The mother is riding a donkey and carrying a young child, her shepherding husband is on foot accompanying her. They depart on a long journey seeking a new home away from bombs and wars. We are told the authorities are after them for their “blood”.  The husband is shown with shepherd’s crook in hand assisting his wife on the donkey – both of them are said to be following a star.

For most of the first part of the book the reader doesn’t get to see the family up close, but only a shadowy silhouette of figures making their long journey across a desert like landscape.

Many will recognize in the donkey, shepherd and mother with baby all following a star the familiar biblical story of Mary, Joseph and Jesus on their flight into Egypt to escape King Herod.  Elements of the Nativity story of the three wise men following the star can be recognized also.

Except for one difference – our “Mary” is here shown wearing a hijab.

And our ‘Joseph’ figure is shown praying “Inshallah” on a prayer mat with shoes off.

The wearing of a veil is not the subject of my criticism of this book. Rather it is the issue of combining elements of two religions, Christianity and Islam, as if they are one and the same – creating a sort of melting pot of religions. The author states that the Christian story of Mary and Joseph’s flight into Egypt is a ‘fable’ and not proven to be true, so she has taken it and retold it as she wishes.

The story is marketed as a “modern retelling of the Holy Family’s flight into Egypt” and “a refugee-story which shows that every family is both holy and unique”.

Indeed, every family is holy and unique. Promoting unity and peace is very good, however, it cannot be done at the expense of individuality and truth. Throwing a mix of two religions into one and pretending they are the same is not the way to do it. Each religion should be respected regardless of its concept of God. Human decency and respect for our common humanity should ensure that.

These are grave matters for a fairy tale. Does this really help our children to understand the refugee and asylum seeker situation? Do they grow in empathy and knowledge of history this way? I would argue no.

I find the book’s illustrations foreboding and very disturbing for young children. Children of any age may find them frightening, horrifying and confusing. Author Nadia Wheatley herself stated that the book should not be read to children before bedtime, and that it was “dark”. No doubt her intentions were to positively highlight a controversial subject – the plight of refugees. However I think she has missed the mark with this one.

A story about refugees would have been more powerful on its own.  Instead the story is watered down and has a quality of remoteness about it. The immediacy of the subject matter and the imaginative power has been taken away by this “re-framing”.

What is interesting is the lack of debate in all circles regarding this book. We hear positive remarks only – no-one is willing to criticize it due to the subject matter of the book.

As the winner of the 2016 picture book of the year award by the Children’s Book Council of Australia, this book will already have been read and discussed in the majority of primary schools across Australia.

A former children’s librarian, Jane Fagan is now a full-time wife and mother of two.