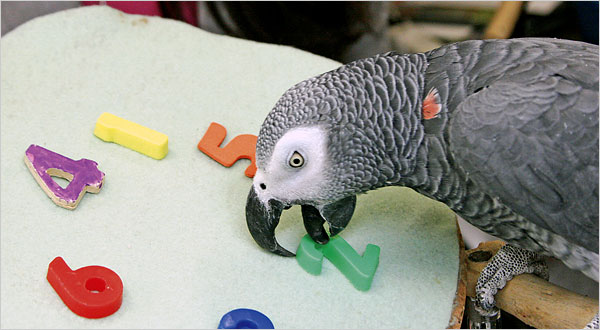 Alex the parrot died in 2007. He could use about 150 words, could name colours and shapes, and could express his emotions in appropriate words. His owner, Dr Irene Pepperberg, trained him for 30 years, from when he was a very young bird.

Did Alex possess knowledge essentially the same as human intelligence? Some people would say so, seeing the difference as one of degree, not of kind.

I once read an article in a popular magazine which made an even stronger claim than this – for ants! Awed by the complexity of an ant colony, with its intricate, rigidly ordered system and the precise place of each ant in the total scheme, the writer speculated that perhaps in the distant future ants would supersede humans as the dominant life form on earth.

He based this on the high degree of intelligence he judged to be evident in the ant world.

What are we to make of the claims for animal intelligence? Is there but a difference of degree between their knowledge and ours, or have we a power of knowing that is different in kind and far superior? I argue that we have and would like, in this brief treatment, to contrast the two ways of knowing.

Firstly, the senses of sight, etc, show things according to their appearances. An animal, for instance, is apprehended as this individual thing with certain observable qualities – colour, shape, size and so on. But the higher kind of knowledge (which I argue belongs in this world only to humans) is about the very nature of things, and transcends what the senses apprehend.

The first kind of knowledge (sense knowledge) shows this individual thing as manifested by qualities that can be seen, heard, touched, tasted or smelt. The higher knowledge (intellectual knowledge) abstracts from the individual and shows the very nature of the thing in question: it is, for instance, of animal as such, abstracting from any individual animal. Or take the difference between colour as known by sight and as known by intellect. Sight apprehends only this individual patch of colour. The intellect knows the very nature of colour: it forms a concept applicable to every colour.

Because sense knowledge knows things according to their appearances, it can’t know anything lacking sensible qualities: it can’t apprehend truth, or the soul, or God. They are outside its ambit.

Through the intellect we penetrate into the meaning of things and form concepts expressing universals which embrace a whole class of particulars – we know not just this dog but dog-in-general. Consequently, we develop a language, which would not be possible unless we apprehended universal notions. The word justice, for instance, names a concept covering all cases of justice: it names a universal.

Without the power of intellect civilization would be impossible: there would be no science, art, literature. Moral laws would not exist, for they require freedom. If a dog bites the postman, we don’t blame the dog for having abused its free will, for it has no free will, and so is not morally responsible for its actions. Nor is any irrational animal capable of the moral depravity found in human life.

Because of his knowledge man has a yearning for the infinite, for he can envisage pure truth, goodness, beauty. The faculty of intellect also points to the conclusion that we are not just material beings, but have a spiritual part called the soul. The ancient philosopher Aristotle argued that the power of thinking implies a soul separable from the body. He says: "It seems to be a widely different kind of soul, differing as what is eternal from what is perishable; it alone is capable of existence in isolation from all other psychic powers" (Aristotle: De Anima, 413b 25-26).

The New York Times obituary of Alex noted the judgment of some scientists that although the parrot learned to communicate in basic expressions, "it did not show the sort of logic and ability to generalize that children acquire at an early age." That is a key point. Sense knowledge, including the power to imagine and remember, fully explains Alex’s achievements. Constant repetition over many years of training conditioned him to associate objects with sounds and to imitate what his trainers did. In one exercise Dr Pepperberg employed a trainer to compete with Alex for a reward, such as a grape. The parrot saw what the trainer did to get the grape, and imitated him.

I mentioned earlier the magazine article that speculated on the possibility of ants superseding man because of the "intelligence" shown in their organised way of life. It is true that they manifest intelligence – but it is not their intelligence. Similarly, a machine manifests intelligence, but that of its designer, not its own. Similarly, dogs, parrots and other animals show signs of intelligence in their instinctive behaviour, as when birds build an elaborately designed nest. But that doesn’t mean they have a power of thinking abstractly; it means they were programmed, as it were, to respond in an orderly way.

Actually, the further removed an animal is from the human power of understanding the more strikingly does it show design in its life. Compare ants with dogs: the ants live according to a clear pattern, whereas dogs are more individual, more spontaneous and adaptable. All animals live in a rut; but the more primitive the animal’s knowledge the deeper the rut.

G.K. Chesterton expressed the great gap between man and all other animals, stemming from our power of thought and therefore of self-direction, by saying that "man is the only wild animal".


John Young is a philosopher whose book The Scope of Philosophy was published last year by Warrane College, University of New South Wales.

John Young is a Melbourne based writer on theological, philosophical and social Issues. He is author of several hundred articles and three books: The Natural Economy, Catholic Thinking, and The Scope of... More by John Young