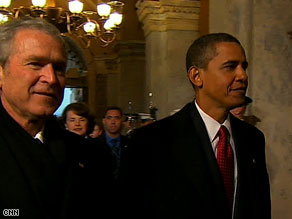 This is our nation’s heritage and the beauty of a representative
republic, that every four year we go through the electoral process
again, and when the power changes hands, it does so amidst solemnity
and pageantry.

If it’s only for today, it looks and sounds like Americans are one
nation under God. Saddleback’s Pastor Rick Warren prayed in the
invocation for “a new birth of clarity….and civility” among people of
goodwill. Now we need to get to the point of having goodwill, though it
seems to have suddenly burst out all over the place overnight. If we
were capable of it this quickly, we were capable of it before.

But today is the first day of the rest of our nation’s life, which is only one cliche that suddenly comes to mind.

The other is that ‘You never have a second chance to make a
first impression.’ Actually, in the case of a newly elected
president, having now been sworn in and beginning the infamous Day One,
he does.

Pray for his wisdom.