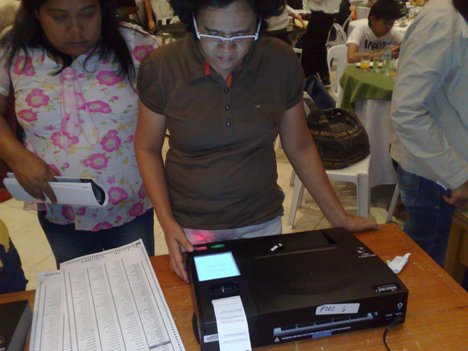 When the Philippines government decided to embrace computerized voting for the 2010 presidential, congressional and local elections the international community looked on with considerable interest. Would May 10 mark a turning point in the struggling Asian democracy and produce, for once, undisputed results?

Authoritative and stable government is essential to our country’s struggle to attract foreign investment, develop economically and lift a large number of citizens out of poverty.

But an electronic revolution in one giant stride? For a population of 50 million voters spread over 7100 islands where radio communication is often unreliable? It was always going to be a big ask. As a risk assessment carried out by Pacific Strategies and Assessment late last year warned, “there is no official record of any country in the world transitioning from a pure manual to a full automated elections system in one electoral exercise.”

Quite the contrary. Electronic voting has been plagued with problems even in the most developed countries of the world, and just a week before the Philippines elections the government appointed Commission on Elections, or Comelec, was frantically installing new memory cards in every one of more than 70,000 counting machines at polling stations because of an alleged glitch.

Nevertheless, Filipinos pinned their hopes on the new election system with the expectation that a quick count would minimize the fraud that bedeviled past elections. So it is not surprising that euphoria over the speed of the results has led, three weeks later, to a state of denial over the possibility of massive cheating, in spite of evidence pointing to that unhappy conclusion. Noynoy Aquino’s win over other contenders is not looking as cut and dried as some would like to think.

A process flawed from the start

In January 2007 Congress passed legislation setting up Comelec with the mandate to put in place an Automated Election System (AES). This involved feeding the ballot into a machine that would scan the ballot, count it and then transmit the results to the Comelec operations center where the consolidation takes place.

Unbeknown to the naïve and trusting voters Comelec’s program had the makings of a massive election fraud. Past elections have been marked by citizen volunteers determined to protect their vote. This time around, Comelec accredited the Parish Pastoral Council for Responsible Voting (PPCRV) under former Vatican ambassador Tita de Villa to supervise the process. But the PPCRV, which functioned effectively under the old system, was out of its league and completely unprepared for the covert fraud that was already at work months ahead of the election.

The contract to provide the hardware and software for the AES was awarded, under very suspicious circumstances, to the lowest bidder, Smartmatic, a Venezuelan company who also handled the election of quasi-dictator Hugo Chavez. This was not an encouraging start.

The counting machine (precinct counting optical scan, or PCOS) was produced in China.

On the software side, the program for reading, counting and transmitting the data as well as printing out election returns was to be in a removable flash card. To review the entire program Comelec hired SysTest Lab, a Denver company discredited by the US National Institute of Standards and Technology as conducting tests without “properly documented and validated tests methods”. SysTest Lab has still to release its systems review to the public.

Not satisfied with the SysTest Lab review a group of independent IT professionals asked to undertake their own review. Limited time and Comelec restrictions made it difficult to fully evaluate the source codes (the human language used to design the program). Completely disheartened, these IT professionals walked out. Hence we cannot discount the possibility that the PCOS machines could be programmed to, for example, count a vote for Gilberto Teodoro or Manuel Villar as a vote for Aquino.

Secondly, there was the fact that the program was contained in removable flash cards. In a May 3, 2010 testing of 350 PCOS machines done by Comelec the PCOS cards used were found to be corrupted. Hence, a few days before the election it was decided that the flash cards for the entire 76,300 PCOS machines, already distributed to all the polling places, were corrupted and needed to be replaced. Lo and behold, the next day they were available for delivery to the polling places in the different islands of the Archipelago.

Of course, there was no time to conduct an independent examination to check what kind of software was configured on the new cards, so the whole process is open to question. Was it possible that the 350 machines tested on May 3 were intentionally corrupted so that the hurried replacement with cards preconfigured for cheating would be possible? There is no way of answering these questions because Comelec has since destroyed all the cards. This type of cheating would be beyond the powers of observation of PPCRV.

A third possible way of cheating is the remote access that Smartmatic had to the PCOS machines. These machines should have been under the close supervision of a citizen’s watchdog to ensure that remote access would not be used to endanger the sanctity of our vote. This kind of watchdog work was, again, out of the league of PPCRV.

The fourth possible weakness is to be found in the data transmission process. Due to its archipelagic geography and high mountain ranges in several islands, radio communication is a major problem in many of the rural places in the Philippines. The difficulty is not insuperable, however. One could set up a center in a high altitude place such as Antipolo using machines equipped with powerful signals that could easily intercept transmission of election results from the provincial PCOS machines with weaker signals.

Such interception could be used for dishonest purposes. It is known, for example, that an additional 22,000 PCOS machines were imported from China by private parties aside from Comelec. Further, Comelec had ruled that a digital signature was not needed from the election inspectors manning the PCOS machines. This set the stage for clandestine, high altitude PCOS machines to intercept weaker signals of genuine PCOS machines from the rural areas. A videotaped interview of an alleged whistleblower, nicknamed Koala Bear — a derisive reference to his facial disguise — seems to point to the use of this fourth option for rigging the election results.

In the absence of overt cheating Filipinos were euphoric over how quickly the votes were counted. But what is clearly emerging is that the official count is the product of a flawed process and the data is irreparably tainted with the possibility of fraud.

Since Comelec has destroyed the flash cards, errors can only be uncovered through comparison of a manual count of the ballots cast with the encrypted data in the PCOS machines. At this point in time the only document that would be free from error is the ballot cast by the voters. In previous non-automated elections civic watchdogs made a big fuss to ensure the sacredness of the ballot boxes—guarding them with their lives if necessary. We don’t know if this was done in this election because we were all carried away with the quickness of the count.

Wisdom by hindsight tells us that while the PPCRV was effective for the old fashioned manual count, doing oversight work over the AES was simply out of their league. The citizens’ watchdog should have consisted of a strong team of IT professionals who would audit the entire election process and ensure the integrity of the count of our ballots.

Citizens groups at the polling places should have been equipped with the wherewithal to ensure that the PCOS Flash Cards in various precincts were properly configured. This would not have been a tall order. The Philippines has a strong IT industry and the normal Filipino civic mindedness would have allowed us to gather a strong team. Many of us who are IT literate could have volunteered for this type of work at the precinct level.

The fact of the matter is that the integrity of the 2010 election results will always remain questionable in the absence of an independent third party for this oversight work before, during and after the election process, notwithstanding Comelec and Smartmatic demonstrations to the contrary.

The bicameral group mandated to canvass election results has been at it for the past two weeks, a task that in the past used to be completed in a matter of days. Complaints of irregularities delaying the process have been given the standard answer—complaints have to be filed at the Presidential Electoral Tribunal.

Would there be any way of getting an accurate count at this point? Presuming that the ballots that were scanned by the 77,600 PCOS machines all over the country were safeguarded from tampering one possible solution is to equip the PCOS machines with flash cards certified to be configured with the right program and rescan the ballots contained in these machines. An army of computers should not make this to difficult to accomplish. But if the election winners are allowed to be sworn in before this validation process is ever undertaken it is not likely that government will have the political will to undertake this validation.

Aquino promised a “People Power” uprising if he was “cheated” in the election. Many of us believe that the people have been cheated, but stirring up civic unrest and protest against this highly suspect election is neither desirable at this point nor likely to happen. Too many of our people are not IT literate enough to appreciate the depth and the breadth of what has happened. We have seen the present civil unrest in Thailand and we would not wish that on our country.

The failure lies in our government institutions. If election fraud on this scale did occur it could only have happened with the collaboration of Comelec and the authorities in the present administration. But then what is equally disappointing is the unconscionable acquiescence of the election winners in spite of the growing evidence of fraud. If nothing is done to investigate these matters thoroughly the cloud of doubt hanging over the Aquino administration will be a major handicap to its efforts to achieve good governance.

Rumor mills have it that the US has had a hand in this fiasco. They did not want Teodoro to win because he could not be manipulated. Of course Estrada, with his record of corruption and plunder, was a no-no. The only option was Aquino, rumored to have a record of psychological pathology, hence more easily malleable. But of course there is absolutely no way of verifying these rumors.

In spite of the dire consequences of opening this election can of worms, to keep our mouths closed is to run the risk of institutionalizing election fraud. Filipinos find themselves once again between the devil and the deep blue sea.

Rosa Linda Valenzona is a Manila businesswoman, a former lecturer in economics at the University of the Philippines, and president of the National Coalition for Family and Life.

none More by Rosa Linda Valenzona