Emotional support animals (ESAs) are making the news, as more and more people are involved in bringing them as companions to college, on air travel or living with them in otherwise pet-free apartments.

Along with this new opportunity for people with special emotional needs to have their beloved, comforting animal friends with them, new problems have been created as well.

Sometimes ESAs (not to be confused with service animals, who help people with physical disabilities, such as seeing eye dogs) frighten or even attack other travelers at airports. The problems can vary from a Pit Bull tearing a piece out of a five-year-old girl’s lip, which happened a few days ago at a Portland airport, to the animals creating a nuisance by relieving themselves in public places.

Some people want to expand the list of animals that can qualify for emotional support. The application forms usually have “cat, dog, and other,” but some are trying to use “other” to bring pigs, goats, hamsters, ducks, turkeys and, notably, a peacock onto an airplane. 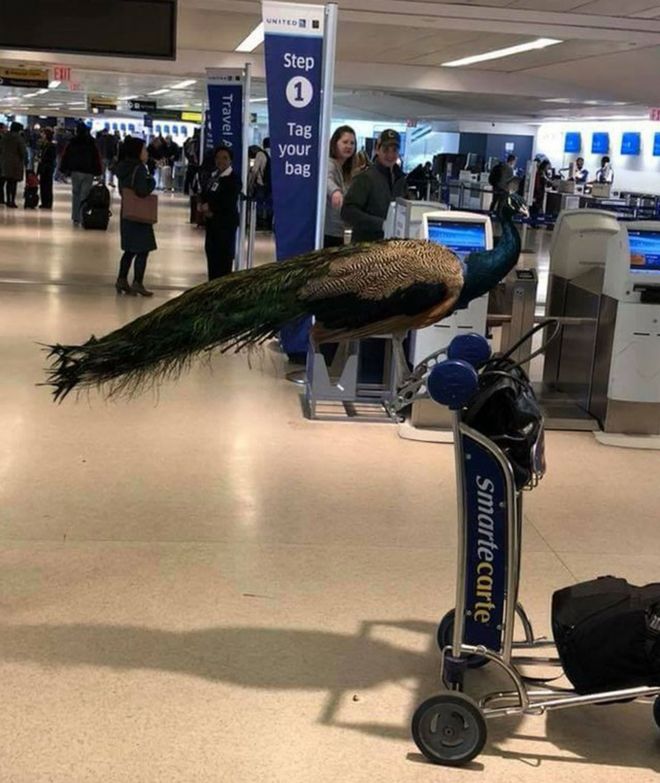 I propose an alternative to these (wonderful, of course) living, comforting, but sometimes barking, biting and excreting animals. Yes, I am talking about stuffed animals, excluding for the moment the kind in the Natural History Museum, although that might be something to think about too.

A person with anxiety attacks or other emotional difficulties could be soothed—maybe even more than by their pet peacock—by taking their Teddy out of storage, or developing a new relationship with a new stuffed animal.

“Stuffies,” “plushies” or “critters,” depending on your family tradition, are traditionally sympathetic.  True, the owner has to impart a personality into the stuffed animal, but that is not hard. In fact, many psychologists see “creative play,” even in grownups as beneficial to emotional health.

While traveling, stuffed animals are so much easier to carry and keep happy than a throbbing lump of flesh and bones. You can put them out of sight in a backpack. (One online expert says to leave their heads sticking out so they can see.) On the other hand, they can be carried around with panache, like the teddy bear Aloysius, who belonged to Sebastian Flyte of Evelyn Waugh’s Brideshead Revisited. They can even help you make friends in airports if they travel that way.

Here are some of the advantages

Real animal: Aside from the normal expense of having a live pet, which can be considerable, it costs another $50 to $200 to have them registered on websites that purport to be official registrations for ESA’s, but may not be. It would be $40 in a co-pay to go to your doctor’s office to get a letter saying you need the animal for emotional support.

Stuffed animal:  The original cost can be under $10 to as much as you want to pay for, say, a collector’s item.  They can be homemade, for even greater savings. You can put eyes and a nose on a sock, and make arms (or paws) and ears out of the other sock in the pair. Food costs are nothing. Veterinarian costs are nothing. If there is a tear, a friend or relative who sews would usually be happy to be the surgeon.

Finally, I come to the best reason these pretend animals can be comforting. They don’t die – unless, metaphorically, in a house fire or some other disaster. Real animals do die, sometimes unexpectedly, and that can be really sad.

My father, for example, always had dogs growing up in the Midwest.  His favorite dog was hit by a car the year before I was born, and he never got another, as he never wanted to go through that pain again. Instead, I grew up with a larger-than-life size artist’s portrait of Drummer on our wall so that he would never be forgotten.  (Neither was my father’s trauma—I have never had a real dog either.)  The loss of a real pet can be devastating, and that is the last thing in the world a person with emotional challenges needs.

If a person is out of the habit of relating to inanimate personified objects, it might take a little time to establish the support relationship.  It also takes some imagination, but creativity is also good for the soul – and, as the psychologists say, a route to emotional health.

Sarah Smith writes from Los Angeles where she is visiting in a hospital ICU. There she heard about another visitor who had tried to smuggle in a peacock, which aroused her curiosity about ESAs.

Sarah Phelps Smith, Ph.D., is an art historian and critic who has taught at University level. She lives in Ohio and takes students to study Renaissance art on site in Italy. More by Sarah Phelps Smith