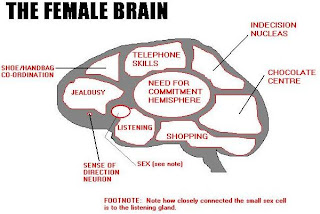 The contraceptive pill could make women better gossips but no better at reading maps, if research carried out in Austria is anything to go by.

The first ever study of the effect of the pill on women’s brains found that it increased areas linked with memory and conversation skills — parts of the brain already better developed in women than in men, the Daily Mail reports. However, the contraceptive appeared to have little effect on areas more dominant in men, including those associated with spatial skills such as map reading.

Dr Belinda Pletzer, of Salzburg University, said the sex hormones in the Pill were clearly having a ‘tremendous effect’ on the female brain. She added: ‘Larger volumes of a brain area could lead to an improvement of the functions this area is responsible for.

‘Looking at the brain areas involved in our study, which are larger in Pill users compared to naturally-cycling women, this could concern several higher order brain functions, especially memory and verbal skills.”

Oddly enough, so many women forget to take the pill (too busy talking?) that public health experts have just about given up in it. Prof James Trussell, of Princeton University warned a couple of years ago:

One in 12 women taking the Pill get pregnant each year because they miss so many tablets… Women should instead use longer-lasting methods such as the implant or intra-uterine device (IUD) which can be fitted and forgotten, he said.

“The Pill is an outdated method because it does not work well enough. It is very difficult for ordinary women to take a pill every single day. The beauty of the implant or the IUD is that you can forget about them.”

He said studies have shown women miss three times as many pills as they say they do. Computerised pill packs have revealed that where as about half of women say they did not miss any pills, less than a third actually did. And where as between 10 per cent and 14 per cent admitted missing more than three pills in a month, actually between 30 per cent and 50 per cent missed that many.

My word — just think of the chatter if they were all conscientious!