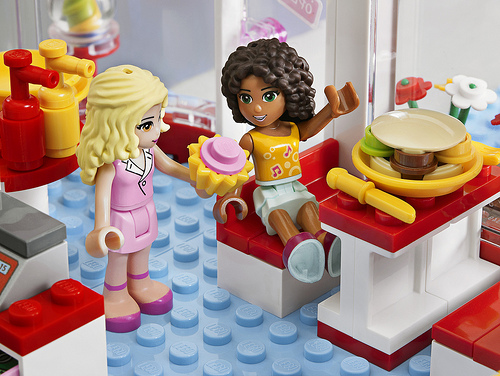 It feels like a long time since I played with Lego on a regular basis, but from memory, my play involved inordinate amounts of time spent building house shells and trying to furnish them. With only moderate success. Unless you have a much bigger Lego collection than I had, or perhaps more patience with building boring walls, the furniture, if you attempt any level of detail, is frustratingly out of proportion with the house.

Apparently I was not alone. A Lego team, sensing there was an untapped market, went to the trouble of following little girls around and finding out what they liked and what they wanted to play with. Conclusion: “what little girls were most concerned about was beauty, a term that also encompasses ‘harmony (a pleasing, everything-in-its-right-place sense of order); friendlier colors; and a high level of detail’.

“Girls hated Lego’s iconic minifigure because it’s too boxy and they like to have a figure they can identify with. Girls told them, ‘I want to shrink down and be there.’ The issue isn’t just the look of Lego sets. The researchers found that while boys focus on following the directions and getting the set together, girls like to take breaks throughout the process and start developing stories.”

Mere detail? Only if you are one of those Lego engineers who make incredible life-size sculptures. If you are a less-than-MIT-engineer-material seven-year-old, the results with traditional sets are depressingly blocky and plain.

So the company, with the intelligence that has resulted in annual revenue of over $2 billion, decided that it would be a good idea to recognize that boys, who make up over 90 per cent of primary Lego consumers, play and build differently, as a rule, than girls do. And that if they wanted to capture the female market they should give girls what they want. Cue “Friends”, a girl themed Lego series with lots of pink blocks, larger and curvier figures (with distinct personalities and names), pets, and lots of detail.

Predictably, gender activists are having conniptions. They cannot allow kids to just be kids and play with toys they like. No, they have to kick up a media storm, and have a 50,000-plus signature petition alleging that Lego (and presumably most other toys) should be gender-neutral.

I did a test on my younger siblings. My 10- and 14-year-old brothers, who love their Star Wars Lego, informed me that Lego Friends were “ridiculous”, “not Lego”, not creative enough, “an absolute disaster” and the ruination of the whole “tradition of Lego” — before threatening to disown me as a relation if I wrote an article supporting the new concept.

My 12-year-old sister thought it was “really cute”, “adorable”, “so detailed”, “more round and happy”, and noted that “none of the other sets have a single pink block”. She would prefer “friends” to the other Lego sets, as would my five-year-old sister. (I will have to remember this come birthday time.) I promise, there was no prompting from me in any of this.

I have now read enough comments on articles about this issue to know that the counter-arguments — “But some boys like pink!” or “But some girls enjoy shooting or building!” — are quick to come rolling in from parents, as if this disproves the claim that boys and girls, in general, like different things.

Certainly both boys and girls can enjoy traditionally “gendered” play; both my brothers and I played kitchen and mud-pies in our day with a cheerfully unconscious harmony. But even when we did things that might appear gender-neutral or even essentially male, like building forts, we differed. When I was head of the fort-building committee (being the oldest has its privileges) interior decorating had a much higher priority than since I resigned the role to my younger brothers.

Statistics don’t always lie. The fact that boys make up 91 per cent of primary Lego users tells us that children have already voted with their playtime, and traditional Lego sets are a boy’s toy. The parents and activists who oppose pink Lego seem to want their daughters to embrace male pastimes. If that is the case, the traditional options are still out there. Girls and parents who prefer the plain blocks are not forced to go pink. Why would they deny other girls the choice to embrace a feminine love for narrative, beauty, detail, nurturing, and role-playing feminine activities?

But that’s the problem. Feminists are afraid that, if given a real choice, too many women would choose the traditionally feminine. The engineering workforce should be 50 per cent female, even if very few females really want to become engineers.

Is feminism so weak that it cannot withstand the assault of “Olivia’s Tree House” and the “Butterfly Beauty Shop?” What a poor and frail philosophy it must be then. I am no feminist, but if I were I would hope my beliefs strong enough to stand in the face of a child’s toy.

Censorship is not choice. It is not liberty. I am all for women not being barred from tech school, but I am categorically opposed to interests that would insinuate that engineering, or building freestyle Lego buildings, is better or more worthy than a nurturing career or using mental creativity to formulate a narrative, relationships, and role-playing activities for the Lego Friends.

Here’s to girls, and women, and what makes them different, unique and special. Yes, even the catty ones.

Rebekah Hebbert is the opinions editor of The Prince Arthur Herald, a centre-right student newspaper that circulates throughout Canada. A student of economics, she lives in Eastern Canada.