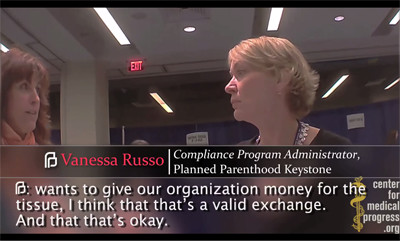 There’s no going back to ‘plausible deniability’ for the abortion giant, or its defenders.

People in media and governmentcan’t not know what’s been going on.

Last week, the House Judiciary committee held the first of a series of hearings investigating the abortion industry giant. Two women who survived attempted abortions, Gianna Jessen and Melissa Ohden, testified. So did a longtime lead attorney steeped in experience in government hearings and court arguments involving fetal tissue research for nearly three decades. In fact, all three of them brought nearly three decades of lived experience to this panel.

Here are some takeaways.

Amazingly, after 18 hours of being burned in her mother’s womb, Gianna was delivered alive in an abortion clinic in Los Angeles on April 6, 1977. She told the committee

Thankfully, the abortionist was not at work yet. Had he been there, he would have ended my life with strangulation, suffocation, or leaving me there to die. Instead, a nurse called an ambulance, and I was rushed to a hospital. Doctors did not expect me to live. I did. I was later diagnosed with Cerebral Palsy, which was caused by a lack of oxygen to my brain while surviving the abortion. I was never supposed to hold up my head up or walk. I do. And Cerebral Palsy, ladies and gentlemen, is a tremendous gift to me.

A moment later, in another testimony to her faith, Gianna said

Hear me clearly, I forgive my biological mother.

Mr. Bopp, who has testified before many congressional committees and argued multiple cases before the United States Supreme Court, was, as always, keenly on mark. One of his opening remarks captures the thrust of his testimony

One of the great tragedies of human nature is that, what history later judges to be gravely immoral, seems perfectly moral to those engaged in the action at the time. Human sacrifice, slavery, genocide, gladiatorial moral combat, and capital punishment for minor offenses are all examples of activities once thought to be moral, but are now considered gravely immoral. That is the position we are in today. Current practices employed by Planned Parenthood and various tissue procurement companies, not only violate federal law when applicable, but also many ethical and moral principles. Furthermore, continuing to allow procurement and sale of human fetal tissue makes one complicit in the act of aborting a child.

Then Judiciary Committee Chair Rep. Bob Goodlatte cited a quote from a dissent written by Supreme Court Justice Anthony Kennedy who, himself, cited graphic quotes from the testimony of partial-birth abortionist LeRoy Carhart:

Dr. Carhart agreed that “[w]hen you pull out a piece of the fetus, let’s say, an arm or a leg and remove that, at the time just prior to removal of the portion of the fetus, … the fetus [is] alive.” Dr. Carhart has observed fetal heartbeat via ultrasound with “extensive parts of the fetus removed,” and testified that mere dismemberment of a limb does not always cause death because he knows of a physician who removed the arm of a fetus only to have the fetus go on to be born “as a living child with one arm.” At the conclusion of a D&E abortion no intact fetus remains. In Dr. Carhart’s words, the abortionist is left with “a tray full of pieces.”

the committee heard from Melissa Ohden, who also miraculously survived a saline abortion in 1977. Melissa is well known to those grassroots pro-lifers who attend the annual NRLC convention where she frequently presents both to adults and teenagers. Her conclusion yesterday was spell-binding:

As you consider the horrors of what happens at Planned Parenthood each day, I would urge you to remember my story, and Gianna’s, too. We may not have survived abortions at Planned Parenthood, but the expectation for our lives to be ended by abortion are the very same as those who do lose their lives there. And I have long believed that if my birthmother’s abortion would have taken place at a Planned Parenthood, I would not be here today. Completing over 300,000 abortions a year provides them with the experience to make sure that “failures” like me don’t happen. As a fellow American, as a fellow human being, I deserved the same right to life, the same equal protection under the law as each and every one of you. Yet we live in a time where not only do such protections not exist, but my own tax dollars and yours go to fund an organization that has perfected the very thing that was meant to end my life.

Within days of that congressional hearing, the tenth video came out, revealing even more of the inside business of Planned Parenthood involvement in the marketing of baby body parts, and manipulations done in the abortion clinic to obtain “fresh” human body parts.

And then came the GOP presidential debate on Wednesday night. As in the first debate, this galvanizing issue featured prominently in the CNN debate with several candidates speaking out about the need to defund Planned Parenthood, and defend innocent human life. None as passionate and direct as Carly Fiorina, who issued a fiery challenge: watch the video.

I dare Hillary Clinton, Barack Obama to watch these tapes. Watch a fully formed fetus on the table, its heart beating, its legs kicking while someone says we have to keep it alive to harvest its brain.”

There have been 10 videos exposing Planned Parenthood since July. The media have struggled to cover most of the them, even though they are full of scandalous information about human organ harvesting. In addition to the 10 videos, lengthier footage of the hours-long meetings from which they were gleaned is also available. Everyone who cares about humanity should watch these videos…

If that gets too difficult to look at, go back and look at Gianna Jessen and Melissa Ohden, listen to their pleas, and do it for the millions of others who didn’t have a voice at the table, other than theirs.