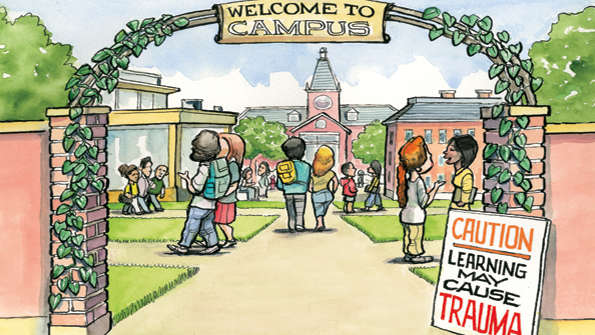 Of course Socrates, Aristotle and all those other old, dead white males were pillars of the patriarchy, stole their ideas from the Egyptians and were probably proto-fascists to boot. But perhaps they did teach us some useful stuff.

These ancient philosophers, who provide the intellectual structure of Western thought, taught us above all about intellectual integrity and how to think. In the Nichomachean Ethics Aristotle taught us that there were five intellectual virtues. The first is that scientific knowledge uncovers eternal truth by means of deduction or induction. The second is that art or technical skill involves production, according to proper reasoning.

These intellectual virtues pertain if you wish to study science, mathematics, astronomy or ethics, politics, economics or aesthetics. If you want to know reality of the world around you or within, you have to reason properly. This pertains in the real world, if not in university.

The results of not reasoning properly are usually obvious. If an engineer were to build a bridge which did not accord with the scientific findings of metallurgy,  his bridge would fail and he would be fired. If an accountant were to produce an annual report which did not accord with the verifiable company statistics, the company would go into financial difficulties and he would be fired.

However, if a professor of history, such as the late Eric Hobsbawm, teaches the value of the most disastrous political and economic system yet devised, one which has failed everywhere it has held sway, he will get paid by the State to continue teaching. Marxism may have an appalling human record and has ruined countries; but it has great soundbites, and emotion rules.

Orwell said: ‘The intellectual is different from the ordinary man, but only in certain sections of his personality, and even then not all the time. There are some ideas so absurd that only an intellectual could believe them’. Today that absurdity is shaping a generation of students.

Much that is taught in our universities is designed to set one group against another. Gender Studies and Race Studies immediately spring to mind. But the greater influence is the pervasive progressive world-view which permeates every department of our institutions of higher learning and which has created the present generation of students.

One of the most dangerous, developments in Western civilisation is that we have reached the stage where we value feelings over ideas, emotions over facts. Bad enough in society in general, but catastrophic when it reaches the university.

In universities throughout the West student censorship holds sway. If enough people have their feelings hurt then free enquiry and discussion is closed down. If the ideology being raised for discussion might ‘trigger’ someone’s anxiety the discussion ends.

We all know of the intolerance of students who would ‘No-platform’ speakers with whom they disagree. Even progressive luminaries such as Germaine Greer and Peter Tatchell have been no-platformed because they did not tick the boxes on transgender rights. We know of the pusillanimous response of university authorities such as the administrator at the School of African and Asian Studies who thought it a good idea if SOAS gave in to student demands to stop teaching dead white philosophers in favour of philosophers with the correct skin hue.

But we would be wrong to just shake our heads at the activities of a few totalitarian students. Their attitudes create an atmosphere which shuts down genuine education, with disastrous consequences for us all.

In 2011, philosophy Professor Daniel Bonevac of the University of Texas, Austin, stopped teaching his course on ’Contemporary Moral Problems’. For over twenty years the course had been extremely popular, enrolling up to 600 students in a single class. He found it was no longer worth the trouble because today’s students are unwilling to debate controversial, politicised issues.

‘Students clam up as soon as conversation veers close to anything controversial and one side might be viewed as politically incorrect. The open exchange of ideas that used to make courses such as Contemporary Moral Problems exciting doesn’t happen. It’s not possible to teach the course the way I used to teach it.’

On a Monday Bonevac would open with a lecture presenting the arguments in favour of one side of a moral issue. On Wednesday the lecture would explore the arguments on the other side. Students would be invited to interact with the arguments and learn through experience how to think for themselves, engage in discussion and present rational arguments. That changed. Students presenting non-PC arguments were howled down with cries of ‘bigot’, ‘racist’, ‘homophobe’ etc. A small minority of students closed down learning.

Most worryingly of all, the students switched off. ‘Students know there’s a politically correct view on a lot of issues. So, when anything connected to race, sex, etc., arises, I see a lot of students turn off. I think they see it this way: Either what comes next is politically correct and they’ve heard before, in which case it’s pointless and boring, or it presents a challenge to that perspective, in which case it’s dangerous’.

This is the great danger of political correctness. PC throws out the intellectual virtues, logic and empiricism are replaced by feelings and being triggered. Sensitivity triumphs over thought, reasoning falls before emotion. Diversity is promoted in every sphere, except diversity of opinion. When people cease speaking they eventually cease thinking.

Not all students hold to this intolerant viewpoint but enough do, that along with their lecturers, they are able to change the trajectory of education throughout our seats of higher learning. We are facing the creation of a cohort of conformists, the politically and culturally orthodox.

Not so long ago students rebelled against authority for freedom of enquiry, today they want to be the authority and demand total compliance.

Dr Campbell-Jack is a retired Presbyterian minister who lives in Stirlingshire in the UK and blogs at A Grain of Sand. This article was first published at The Conservative Woman and is republished here with permission.