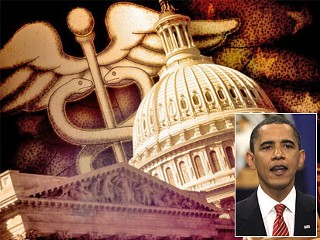 Before the health care ’summit’ began Thursday morning, there was plenty of media skepticism over whether Washington politicians, in the Congress and the administration, can actually put bitter partisanship aside and finally and responsibly deliberate over the people’s business. Consensus is that it’s doubtful.

The Financial Times captures the ideas pretty well in this brief editorial.

Tuesday’s meeting of Barack Obama and congressional leaders from both parties to discuss healthcare is, first and foremost, a political show – but do not underestimate its importance. Badly needed reform hangs in the balance, and so do the wider prospects for Mr Obama’s presidency.

The theatrical aspect of this televised “summit” is apparent. There is no will on either side to compromise. The Republicans are intent on blocking comprehensive reform. The president’s new proposal, on the other hand, merges bills recently passed by partisan majorities in the House and Senate, offering no concession to conservative complaints. Each party simply aims to embarrass the other.

Shamefully true. And they make the sorry point that it is also “sadly” true that partisan tactical moves on camera in front of the nation will wind up being the measure of success. Like how well Mr. Obama can obscure Democrats’ plan to make a power play, or can ‘expose Republicans’ failure to offer an alternative’.

Which leads FT to this conclusion:

Outreach to Republicans on matters such as medical liability reform would improve the president’s proposal, lend it a bipartisan flavour and impress many voters. Mr Obama should attempt that today. Unfortunately, he knows that this approach risks worsening the Democrats’ splits, and would most likely elicit no new Republican support. And so the show goes on: a deeply dispiriting struggle, with no resolution yet in sight.

So at the end of the day, that remains true.

It’s interesting……I’ve been traveling, and caught some of the first few hours of this summit. Early on, a resolute President Obama started with his usual posture head tilted back, chin up, looking down the nose in a commanding way at thouse around him. That quickly faded to a dead-on stare, and then various positions of head cradled in hand while staring down the Republican opposition. Frankly, I didn’t expect the Republicans to come better prepared than the Democrats, but they seemed to be measured and reasoned and fact-based. They’ve been represented in the media as discombobulated and void of ideas. Sounded like they offered plenty in the first two hours alone.

[Oklahoma Sen. Tom Coburn] said Obama’s approach seemed to be that “it’s my (Obama’s) bill, plus what you think.”

Coburn, a physician who has co-authored an alternative reform bill, was one of the key spokesmen at the summit for Senate Republicans, giving his views at the outset of the meeting and again at other points.

He said the nation could dramatically cut the amount spent in the health care system by attacking waste and fraud in the public programs, Medicare and Medicaid. The money saved from rooting out waste and fraud, he said, could be used to provide access to care for those who currently lack it.

Coburn said one-third of the money spent on health care doesn’t go toward treating the sick or preventing illness.

“We don’t need to spend a penny more on health care in this country,” he said. “What we need to do is spend it much more wisely and much more effectively.”

Coburn also said fear of medical malpractice suits was akin to “extortion” that drives doctors to order tests for their own protection rather than for patients.

He said any health care reform legislation should focus on giving people incentives for prevention. He cautioned against more government intervention, saying governments now direct “over 60 percent of the health care in this country.”

“And if throwing money at it and creating new government programs could solve it, we wouldn’t be sitting here today because we’ve done all that,” Coburn said. “It hasn’t worked.”

At the end of a long day, I was surprised to find little to no coverage of this dramatic event in most of the elite media. Fox News devoted hours to it. CNN seemed to be covering anything but this summit, at least when I checked, which I did throughout the evening. Online, top news stories of the day turned up all kinds of articles on events both national and international….with the glaring omission of the health care summit.

Late, USA Today came through with this:

After more than seven hours of occasionally acrimonious debate, Democrats and Republicans said they see little chance for bipartisan action…

“I was discouraged by the outcome,” said Senate Minority Leader Mitch McConnell, R-Ky. “I do not believe there will be any Republican support for this 2,700-page bill that the American people are so opposed to.”

Obama dominated the meeting at Blair House, the presidential guest residence across from the White House. He challenged Republicans to defend their step-by-step approach to health care or come around to Democrats’ comprehensive measure.

“After five decades of dealing with this issue, starting over … means not doing much,” the president said. “Politically speaking, there may not be any reason for most Republicans to want to do anything.”

What? Is he insinuating that “most Republicans [don’t] want to do anything”? That’s ludicrous, and if Thursday’s summit openly showed anything it was the determination of both parties to put forward their own particular, specific plans.

Obama said the two sides should take up to six weeks to try and merge their philosophically divergent views about health coverage, costs and ways to overhaul the insurance market. If there’s still no agreement, he said, “that’s what elections are for.” And he did not rule out having Senate Democrats pass the bill with a 51-vote majority, rather than a 60-vote supermajority they no longer have because of Republican Scott Brown’s election in Massachusetts.

So at the end of the day, it’s still a matter of power politics.