In answer to the ubiquitous question…..nobody lost, and both candidates did a fine job.

Neither made a gaffe, though one or the other was expeted to. But one didn’t win by not losing.

Striding confidently out on stage, the Alaska governor reached across to Biden and set the folksy tone early.

She finally got to talk to the American people directly, for the
first real time since the Republic convention. If she did win, it was
also because expectations were so low for Palin.

She spoke in complete sentences, unlike her performance
in several prior TV appearances. She parried Biden’s jabs and often
pivoted into areas like energy and taxes, both within her comfort zone.

And she cast herself as the fresh face in the race for the White House – and Biden as the Beltway insider.

“With all due respect, I do respect your years in the U.S. Senate,”
she told Biden, a 35-year veteran of the Senate. “But I think Americans
are craving something new and different, and that new energy and that
new commitment that’s going to come with reform.”

Even some media watchers and policy wonks who might have otherwise given the nod to Biden had to acknowledge the newcomer for what she managed in 90 minutes on the intense national stage.

For a typical American who had been convinced by the
Partisan Press that Sarah Palin is an illiterate redneck who didn’t
know Afghanistan from Alabama, she won this debate.  She debated a
geezer from the Washington establishment to a standstill and forced him
into several erroneous statements (I would say “false,” but Sen. Biden
talks so much without knowing what he’s talking about, he could be
clueless rather than malicious).

Biden did vote for a war resolution.  McCain did not vote, as Biden
claimed, for the Obama tax hike.  And Obama did absolutely nothing
about the subprime mess at Fannie Mae except take record amounts of
their money.

Sarah Palin wasn’t brilliant. She wasn’t able to adlib like Sen.
Biden could to score additional points.  She let quite a bit of Biden
nonsense go unchallenged.

But six weeks into the race, she went toe-to-toe with a guy who’s
run for president twice, and she held her own and even pushed him
around a few times.

For the average voter, content was a wash which means this ended up as a personality contest.  Which means she wins.

And that means John McCain goes into the next debate on a level playing field.  She didn’t leave him in a hole.

Which merely quickens the pace at which the presidential race
returns to what it was always going to be: Either a referendum on
George W. Bush (Obama wins) or Obama (McCain wins).

They go back at it next week. But the playing field may have been nearly leveled.

Three of the four candidates in this race have been
debating off and on for a year and a half. All of them performed quite
well in their latest round. Palin was entirely out of the loop until
about a month ago. Yet her performance was mostly equal, and in some
ways superior to, that of McCain, Obama, and Biden. 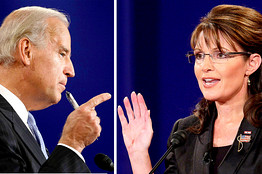 The narrative is another change we can count on.